From the Other Side: The Champaign Room previews Wisconsin vs. Illinois

What's up with Illinois? Which version of Nathan Scheelhaase will see Saturday night? Can the Illini pull off the upset? Mark Primiano from SB Nation's Illinois blog fills us in.

Share All sharing options for: From the Other Side: The Champaign Room previews Wisconsin vs. Illinois

1. B5Q: How has year two under Tim Beckman began? According to, or above/below expectations?

Mark: I don't think any Illini fan can be unhappy with how year two of the Beckman era began. The 2013 Illini already have 150 percent of the wins the 2012 edition had and it's not even Halloween yet. The Cincinnati win may look less impressive by the week, but the Bearcats would be a much different team if Munchie Legaux hadn't been knocked out for the year. The defense is still a very young and very green work in progress, but hiring offensive coordinator Bill Cubit has worked wonders for correcting what was a terrible offense.

2. B5Q: Illinois is coming off its bye after a 39-19 loss at Nebraska. What's the mindset of the team entering this Wisconsin game, and does the timing of the bye present any more advantages? 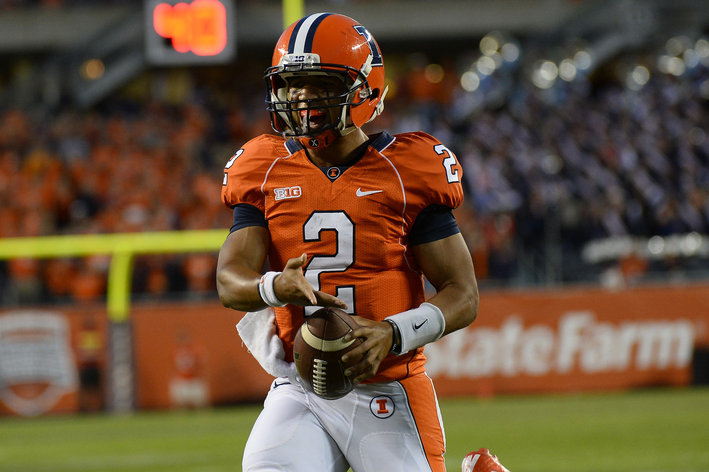 Mark: While most of us are less than thrilled that the Illini happened to have two bye weeks within one month, the timing of this one wasn't too bad. There were noticeable flaws and problems in that game and now Beckman has had two weeks to work on potentially correcting those issues. Will the fortnight off make the secondary tackle better or improve the pass rush? No, but the players get an extra week to gameplan against one of the toughest opponents they'll play all season and that's rarely a bad thing.

3. B5Q: Offensively, how do the Illini match up with the Badgers? Gary Andersen said Wisconsin's defensive effort vs. Northwestern last weekend was the best he's seen this season.

Mark: The offense completely depends on which version of Nathan Scheelhaase shows up. If he's on and confident, the Illini offense can hang with pretty much every defense in the conference. The only true weapon may be running back Josh Ferguson, but when Nate is following the Cubit ideal, every player is an honest option to be thrown to and the three massive tight ends create all sorts of match-up issues, freeing up Ferguson to do more damage.

But as every defensive coordinator in the conference should have learned from the Nebraska game, Nate somehow still struggles with reading blitzes and when he gets rattled he struggles to recover. If Wisconsin can keep pressuring him, which shouldn't be the most difficult thing in the world, then the Badgers should have no trouble containing the Illini offense.

4. B5Q: And on defense, how will Illinois' fare against Melvin Gordon/James White, Joel Stave and Jared Abbrederis? It seems as though Abbrederis will indeed play.

Mark: Other than linebackers Jonathan Brown and Mason Monheim, there really aren't any standout players on the Illini defense. There is little to no pass rush and the secondary is young and iffy. I was really hoping Abbrederis would be out so Tim Banks could cheat and put another defender in the box, but without that being a realistic option I think the Badgers' offense has a very good shot at putting up some impressive numbers against a non-terrible team.

5. B5Q: For Badgers fans heading to Champaign, how would you plan their night out, with a place to eat, drink, etc.? And what about pregame options?

Mark: I would envy all of them, as my life in Kansas keeps me from attending home games. Alas. A lot of what I'd recommend depends heavily on age. If the fan is college-aged or a recent grad, the Campustown area is a lot of fun. Firehaus was always my personal favorite bar and the food is pretty good, too. Murphy's Pub is another place you can't go wrong and could actually get away with going even if you're a bit older.

Avoid Joe's like the plague. It hosts a lot of Greek football blocks on gamedays and away fans will not receive the warmest welcome.

If you're a bit older or don't want to spend time surrounded by college kids, the downtown Champaign bars are very fun, but the best food is in Urbana at Black Dog's. Top-notch BBQ.

Mark: As much as I'd like to believe the Illini could manage another wonderful Wisconsin upset in Champaign like the one I witnessed back in 2007, I just don't see it happening. Wisconsin 38, Illinois 17.