After several mistakes cost the Badgers a chance at victory in Columbus two weeks ago, an aggressive defense led by the Chris Borland took charge against a potent Wildcats offense.

Two offenses were supposed to show up Saturday afternoon in a knockout, drag-out fight between the spread-heavy threats seen in Venric Mark, Kain Colter and Trevor Siemian of the Northwestern Wildcats and the dual running attack of Melvin Gordon and James White, paired with a sprinkling of the man that catches everything, wide receiver Jared Abbrederis for the Wisconsin Badgers.

Apparently, Chris Borland and the Wisconsin defense didn't get the memo.

Two weeks after suffering a tough loss at Ohio State, the Badgers' defense stood its ground and then some while also taking advantage of injuries to Mark and Colter, limiting an offense that gained 474 yards per game to only half that while en route to a 35-6 victory at Camp Randall Stadium.

5th: National ranking for Wisconsin in total defense, giving up 267.3 yards per game (second in the Big Ten behind Michigan State)

5th: National ranking for Wisconsin in scoring defense, giving up 13.2 points per game (first in the Big Ten)

10th: National ranking for Wisconsin in rush defense, giving up 90.2 yards per game (fifth in Big Ten - yes, you're reading that right. Michigan State, Ohio State, Iowa and Michigan all are in the top 10 nationally in rushing defense)

13th: National ranking for Wisconsin in pass defense, allowing 177.2 yards per game (second in Big Ten, behind, you guessed it, Michigan State)

0: Turnover margin for Wisconsin on the season (three fumble recoveries + five interceptions - eight turnovers), tied for 64th in the nation

7: Number of sacks by Wisconsin's defense entering Saturday, tied for ninth in the Big Ten

7: Number of sacks by Wisconsin's defense against Northwestern Saturday

9: Tackles for loss by Wisconsin's defense

3: Interceptions by freshman cornerback Sojourn Shelton, which leads the team

Looking at the typical spread formations the Wildcats employed vs. the Badgers, defensive coordinator Dave Aranda threw some interesting and varied personnel at Siemian and Colter:

1. Pressure on the quarterbacks and containment of a dual-threat Colter. When healthy, Colter presents trouble as a quarterback and also a wide receiver. Saturday afternoon, he gained just 10 yards on the ground on six carries, only 34 yards through the air and was sacked twice. One key moment came when linebacker Ethan Armstrong contained Colter and ran him down on a 3rd-and-7 early in the second quarter for a sack, not allowing him to scramble for the first down. In addition to sacking Siemian five times -- he was just 13-of-34 for 163 yards -- and Colter twice, Caputo, Borland and Kelly each notched a quarterback hit, as well. More on this below.

2. Tanner McEvoy. What a difference two months can make. After initially coming to Wisconsin to compete for the Badgers' starting quarterback job, the sophomore transfer started his first game at safety with Caputo moving to F-side linebacker. He finished the game with four tackles.

Head coach Gary Andersen realizes the difficult journey McEvoy has had to endure, amongst three different positions and a wrist injury.

"It's another story on this football team of unselfishness and care factor and want-to for the kids on the team and University of Wisconsin, because that's what Tanner has," Andersen said Monday. "He could have easily gone into a shell, and said ‘Woe is me,' and, ‘Why has this happened to me?' and everything else that could come with it that you see a lot in sports, period. He had none of it."

3. Caputo. Try to play a game called "Where's Caputo?" during each Badgers game. It's impressive where he is and what he does on the field, whether it's covering receivers or tight ends, coming off the safety position to blitz off the edge, or now, switching to F-side linebacker against teams featuring a spread look.

Andersen mentioned how the move allows another athlete to be on the field and be more efficient to run the defensive looks in his new hybrid safety/linebacker role.

"It gives the ability for B.K. [Kelly], Ethan Armstrong, those kids to go in and be move involved in the box in the pass rushing and then be protected by the boundary in their pass drops, which takes a third of the field that they're covering now instead of having to cover two-thirds of the field if they're matched up into the field all the time," Andersen said.

4. Third-down conversions and three-and-outs. Seven of Northwestern's drives had just three plays before ending in a punt. All of the Wildcats' drives in the third quarter were 3-and-outs, as NU gained just 17 yards that quarter. Overall, Northwestern converted only two of 14 third-down opportunities.

1. One big pass play. Late in the first half, after a Joel Stave interception allowed the Wildcats to start a drive on their own 16, the Wisconsin secondary was caught in what looked like a zone, or defensive backs were staring at Siemian, as wide receiver Rashad Lawrence caught a 46-yard pass along the left sideline. Also to note, only three rushers blitzed on that play, leaving Simian with plenty of time to unload that ball.

2. Turnovers. Wisconsin didn't necessarily need to worry about takeaways Saturday, and it had one early with the Shelton interception, but that was the only one on the day. With the pressure and confusion of Aranda's defense overwhelming the Wildcats minus two of their playmakers, it didn't matter in this game. 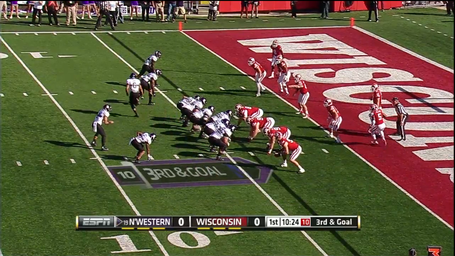 The second sack: Out of the 1-4-6 personnel grouping, notice how eight or nine players could be blitzing from within 5 yards of the line of scrimmage. Eventually, Armstrong contains Colter and chases him down for the sack. 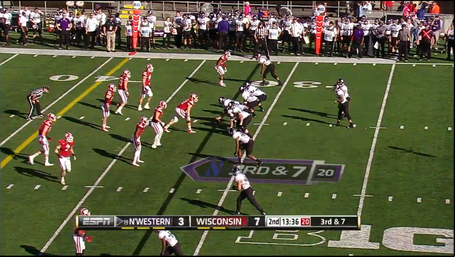 Vince Biegel's sack (UW's fourth of the day, by the second quarter) came out of a two-linemen look with Kelly and Biegel rushing on the ends. Borland faked the rush, and although Hillary is focused on his receiver, even he's close enough to look like a potential rusher. Biegel stunts with a bull rush inside while Tyler Dippel goes outside, getting the sack. 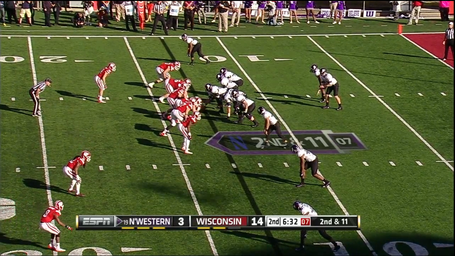 Okay, last one. This is Hammon's first career sack. I'll show two pics on this one, just to show what confusion the defense can bring. This looks like an odd front with two down linemen and Kelly standing up. 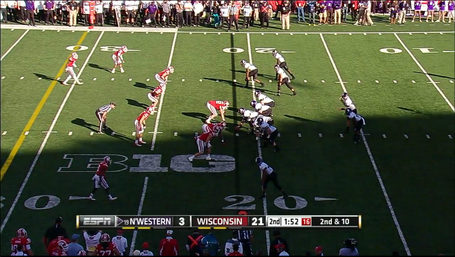 Watch Borland and Hammon time their blitz up the middle perfectly through the "A" gaps. 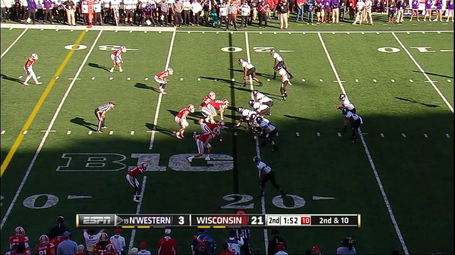 Linemen pick up the more dangerous Borland, leaving Hammon one-on-one with the running back, whom he eludes to drop Siemian.

Wisconsin gave Northwestern all it could handle this past week. Another Saturday night game awaits the Badgers on the road vs. Illinois, who boasts an offense ranked 39th in the nation with 457.2 yards per game (fifth in the Big Ten). Andersen knows this defense will face some challenges against a passing attack ranked third in the Big Ten with just over 280 yards per game through the air.

"My guess is there's probably five to seven personnel groups as you go through each game and look at it to see different kids on the field, and they have a lot of different offense, very talented quarterback (Nathan Scheelhaase), who, by the way, is a tremendous young man."