A hint of panic swept Badgers fans after the Wildcats knocked Jared Abbrederis out of Saturday's game with a head injury. 423 yards and four touchdowns later, Wisconsin's offense had nevertheless stepped up to help dominate Northwestern.

In a blowout of unexpected proportions, Wisconsin's offense demonstrated it could remain on track despite the loss of a key playmaker for a good portion of the game. With running backs Melvin Gordon, James White and the offensive line reverting back to what's been seen earlier this season before the loss at Ohio State, along with a receiver corp that stepped up when needed, Wisconsin racked up 527 yards of offense, most of it after the head injury to wide receiver Jared Abbrederis.

6.7: Yards per play against Northwestern

6.5: Yards per play against Ohio State

5: Catches by the rest of the Badgers' receivers

3: Number of turnovers by Wisconsin

3: Number of sacks given up by Wisconsin

3: Number of 15-plus-yard receptions by wide receivers not named Abbrederis (two for Duckworth, one for Erickson)

1. Ground game starts up again. After being held to just over 100 yards against the Buckeyes two weeks ago, Ryan Groy and a returning Dallas Lewallen opened holes that led to the Badgers' gaining 286 yards on the ground, with both Gordon and White going above the century mark (172 and 101, respectively).

2. Receivers and others stepping up in place of Abbrederis. With his 63-yard touchdown catch, the Wautoma native did lead the team in receiving yards in only one quarter. However, the combination of Jeff Duckworth, Jordan Frederick and Alex Erickson jumped in and made the necessary plays to help balance an offense that gained 241 through the air. There were three passing plays beyond 15 yards, as Duckworth had two 18-yard receptions, while Erickson adjusted nicely on a 35-yard reception over the middle to set up a touchdown in the third quarter.

Although head coach Gary Andersen noted he expects Abbrederis to play vs. Illinois, the receivers and also tight ends showed they can contribute. Jacob Pedersen and White also got in the action, as Pedersen led the team in receptions for the afternoon. Essentially, it might be a moneyball-type effort for the Badgers' passing game without No. 4 on the field, as many will contribute to make up for the loss of one big player.

3. Interesting looks. Before being a false start was called in the second quarter, offensive coordinator Andy Ludwig called a play where White was the quarterback, with fullback Derek Watt also in the backfield and Corey Clement sprinting in a fly sweep look. Makes you wonder what other plays/personnel they can use, even if they can fit all three running backs into the game and not use a wishbone offense. You also saw linemen Ray Ball and Zach Matthias in the backfield on a goal line play, as well as a Clement screen pass come out of a shotgun 11-personnel, with tight end Sam Arneson split out wide right.

4. The fly sweep and its variants. We'll get more into this below on the playaction off of this seemingly bread-and-butter play for this offense, but besides the large 71-yard scamper by Gordon, you saw it used out of many formations, including one where Watt was the single back instead of White. The fly sweep does have the zone running play associated with it when faked, which has been used with success this year as well, but below we're going to look at how it helped the passing game in playaction mode that lead to the Badgers' first score of the contest.

1. Turnovers. All six of Northwestern's points came after Wisconsin miscues with the Abbrederis fumble on the Badgers' first series and quarterback Joel Stave's interception intended for wide receiver Kenzel Doe right before the end of the first half. The Wildcats' defense is known for being opportunistic, and indeed it came up with three takeaways. Abbrederis' fumble was an aberration, as was his drop of a back-shoulder throw that lead to Stave's first interception late in the first quarter (quite possibly the first back-shoulder throw I've seen all year from the Badgers' signal-caller). Stave's second pick to Doe was underthrown and might have been a result of miscommunication or the quarterback not seeing the defensive back. Surprisingly, though, even with being -2 in the turnover margin, Wisconsin still thoroughly dominated.

Effects of the fly sweep in the passing game 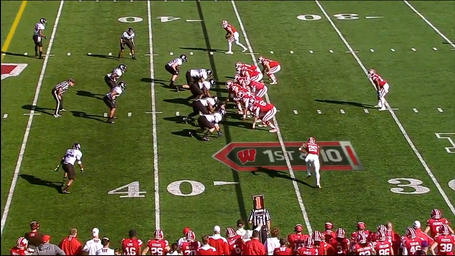 From the Wiscosnin 37, it looks like a typical set-up for the Badgers' offense in the fly sweep. It's usually a two-tight end set, either right or left, and the majority of the time, the side wherever the tight ends are lined up at, the ball will be run toward. Gordon, split out wide left, does his normal sprint to the right. Right now, there are only seven Wildcats in the box. Stave takes the snap, and here comes the first fake to Gordon: 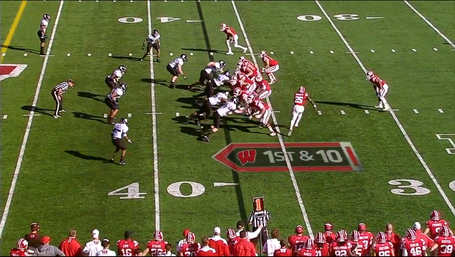 The cornerback on the bottom of the screen comes as Gordon sprints forward. Stave fakes the hand-off to Gordon, but there's always that zone run from Wisconsin. Stave, however, now fakes it to White. Note how many purple helmets are within 5 yards of the line of scrimmage, staring at this second, and I would say most crucial, fake. 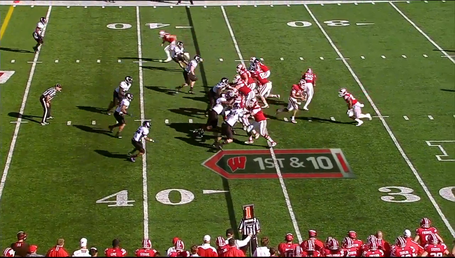 Notice how many defenders are within 5 yards of the line scrimmage below to guard against the fly sweep and the zone run: nine. Although there is a receiver underneath in White for the Wildcats to cover out of the backfield, look to the right of your screen to see how open Abbrederis is with the safety biting on two of the possible fake running plays. 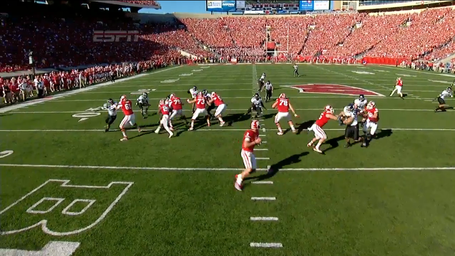 The result: a nicely thrown, 63-yard touchdown to Abbrederis.

Wisconsin got back on its feet offensively in a lopsided affair. Northwestern never really recovered after the long bomb from Stave to Abbrederis, and even with the star receiver out, the running game and receiver support did its share in a 35-6 win.

Next game is at Champaign, Ill., as the Badgers go on the road to take on an Illinois defense ranked 102nd in the nation in total defense and 97th against the run.