Pundits said Wisconsin would need Joel Stave and the passing game to step up to have a chance to beat Ohio State. He did, but the Buckeyes smothered the Badgers' ground game.

All you heard during the week of Wisconsin-Ohio State was how quarterback Joel Stave and the Badgers' much maligned passing attack would not match up with the Buckeyes' secondary chock full of NFL prospects, and that would be the deciding factor in the "de facto" Big Ten Leaders Division championship.

After throwing for 295 yards through the air -- 207 to wide receiver Jared Abbrederis -- Stave showed he could contribute in a big-game atmosphere. But it was Ryan Shazier and the athletic front seven of the Buckeyes stuffing running backs James White and Melvin Gordon that was the key to stopping the Badgers Saturday night.

Before the season began, offensive coordinator Andy Ludwig and others talked about opening up the passing game more. Trailing most of the game (at times between 10 and 17 points), along with an opposing defense selling out for the run, it was the first time this season the Badgers threw more than passed.

Joel Stave showed up in a big way Saturday night. If not for Wisconsin's passing efforts, this game would have been a blowout by halftime. Although he threw a costly interception in the third quarter, Stave's rapport with Abbredreis shone against a very formidable Buckeyes secondary. Melvin Gordon and the ground game could not get going due to a stingy front seven and the offensive line didn't help its cause either with several penalties.

6.5: Yards per play by Wisconsin

10: Catches by the rest of the Badgers' receivers

88: Receiving yards by rest of the Badgers' receivers

113: Rushing yards gained by White against Purdue, in the first half

1. The running game and the offensive line. Despite averaging 350 yards per game coming in and facing a younger front seven that many thought would give up some big plays, the Badgers managed just 3.9 yards per carry and were held to 104 yards.

Much of the credit goes to the Ohio State defense, without a doubt. They were quick and did what they had to slow down that old-fashioned Wisconsin run game.

Let's take a look at that jet sweep: 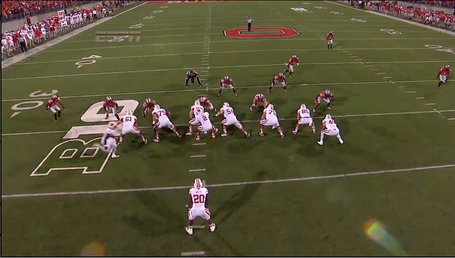 Wisconsin runs the fly sweep out of multiple formations, but this is 22 personnel with Gordon split out wide left on the opposite side of the field from the two tight ends strong side right, with Abbrederis split out right, as well. Note how many Buckeyes defenders are on that right side -- eight. Think they smell a fly sweep?

The ball is snapped and watch how cornerback Bradley Roby crashes down off of Abbrederis, while tight end Brian Wozniak lets a defender get inside of him 2 yards behind the line of scrimmage. 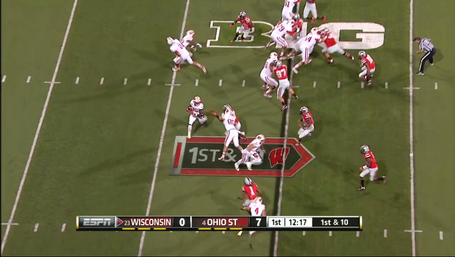 The result: a 4-yard loss. Although it held Wisconsin to under four yards per carry, Ohio State's commitment to stopping the running game exposed the Buckeyes in an area no one expected... but more on that in a bit.

2. The offensive line at times did not get to that second level on running plays, allowing Ohio State's linebackers like Shazier to make plays. Granted, like Gary Andersen mentioned in his press conference Monday, they sold out to stop the greater of two evils. Credit to the speed of the Buckeyes' defense for shooting gaps and making plays. Wisconsin's o-line did get to the second level during some plays as well, as Gordon and White at times had to make one defender miss to break a long one. Another credit to the Buckeyes' defense, though, for solid tackling.

Five false start penalties by the offensive line and tight ends (two each on guard Ryan Groy and tight end Sam Arneson), plus a holding call on left tackle Tyler Marz stalled drives. That holding call negated a nice third-down conversion after Stave hit Abbrederis for a 16-yard gain. There was also a sack and forced fumble against Stave on 2nd-and-6 where junior guard Kyle Costigan and Gordon missed a block. It appears, based on replay, that Stave had wide receiver Jeff Duckworth open to the left side if he's given another half second.

3. No second receiver complemented Abbrederis. It's been mentioned time and again, but another receiver, whether a wideout, tight end or running back will be needed at some time this season. Although Abbrederis had a career game, he won't be able to make those plays all the time. Redshirt freshman wide receiver Alex Erickson played more snaps Saturday night, catching two passes for 25 yards, but dropped a couple of passes as well.

For the season, Abbrederis has 33 catches. All other receivers combined? 16. Abbrederis has 2/3 of all the receivers' receptions for the year. Second on the team with catches is White, who has 15.

1. The play-action game. As Ohio State sold out to stop White and Gordon, several play-action passes allowed Stave and company to strike at what was regarded as a highly impressive Buckeyes secondary. Let's start with the fly sweep. Ran less than a handful of times, the fly sweep can set up for a zone run, or a nice pass. 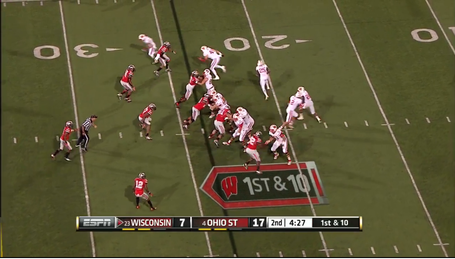 Note how the defenders sell out for the run to stop the elusive Gordon. The dedication to stop the run allows Arneson to sneak out to the right side, with the linebackers out of position (the purpose of every play-action: to get defenders out of their assignments), and from there, it's an easy Stave pitch-and-catch for 20 yards. 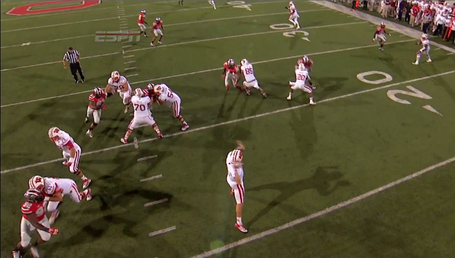 Of course, this wasn't just effective coming out of the fly sweep. Watch how this play-action develops: 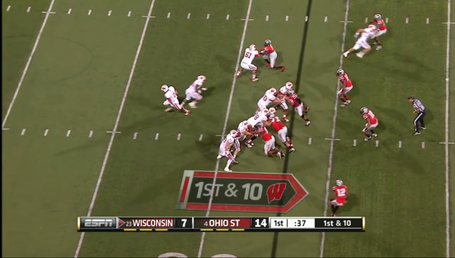 The fake to the running back out of the backfield freezes the linebackers and the cornerback on the top of the screen, leaving Abbrederis this open: 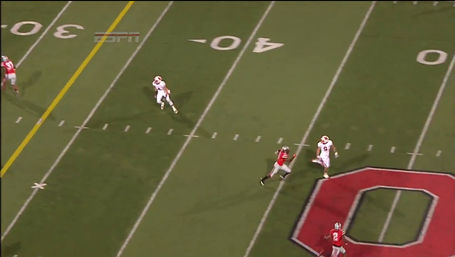 That's 6 yards of separation from any Buckeye defender. Andersen has seen the improvements Stave and company have made.

"I think we definitely have made strides, especially in the play action throw game over the last two weeks," he said. "It really showed in this game. It showed in this game because they were so dead set on stopping the run. That was their deal."

2. Stave passed for nearly 300 yards and had one of his best games as a Badger. The head coach noticed the quarterback's confident attitude Saturday in the Horseshoe.

"He reacts to adversity in a calm and cool way now as a quarterback. That's impressive," Andersen said. "I didn't really feel that in spring, sometimes in fall camp I didn't feel like that. But he just, ‘Okay, here we go.' And that will continue to improve."

3. Abbrederis. Going up against a future NFL cornerback in Roby, Abbrederis consistently made plays while being blanketed (sometimes a little too heavily). Asked what makes Abbrederis so hard to cover, Andersen said the senior from Wautoma possesses a variety of abilities to give defenses fits.

"He's the full package. He understands zone coverages, he's going to get into the holes," Andersen said. "He's very talented when it comes to catching contested balls. Jared is not deceptively fast; Jared is fast. That is the bottom line."

Wisconsin's offense made strides passing the ball, but that was also due to the Buckeyes committing (and as seen, over-committing at times) to suffocating the running game. Shazier, Roby and company allowed the Badgers' air attack get the best of them most of the time, but they stopped the more lethal of the two, which ultimately decided the outcome.

In two weeks, Wisconsin will take on a Northwestern defense currently ranked 87th in the FBS in total defense, 28th against the run and 117th in passing yards allowed. Will Stave and Abbrederis need to be turned loose again? Tune in next Saturday.