From the KKSE Vault: A long road led Jon Leuer to Memphis

Share All sharing options for: From the KKSE Vault: A long road led Jon Leuer to Memphis

Ed. note: This article was originally published May 29, 2013, on the original Kielbasa Kings site. Leuer recently signed a three-year, $3 million contract with the Memphis Grizzlies, and he is currently playing on their NBA Summer League team.

That's the number of miles one would travel from Milwaukee to Houston, Houston to Cleveland, and Cleveland to Memphis. This could be the total mileage for one great American summer road trip, or in reality, a nearly year long journey for a former Wisconsin Badgers star now on his fourth NBA team. At times, the past eleven months were difficult, but as things often happen for a reason, Memphis Grizzlies forward Jon Leuer ultimately landed on a 56-win team that upset the number one seed en route to a spot in the Western Conference Finals.

"I mean it was definitely a lot of change this year, but I feel I ended up in a great spot on a great team," said Leuer, who we spoke with late last week after a Grizzlies practice.

A lot of change is an understatement. A 2011 second round draft pick of the Milwaukee Bucks, the Houston Rockets acquired him as part of the trade that brought the Samuel Dalembert era to Milwaukee on June 27, 2012, only to be waived less than a month later. A Central Division rival, the Cleveland Cavaliers, scooped him up two days later. He played in only nine games and bounced between the Cavs and their D-League affiliate, the Canton Charge, for the first part of the season. Then on January 22 of this year, Memphis traded for his services in exchange for forward Marreese Speights, guards Wayne Ellington and Josh Selby, and a future first round draft pick. 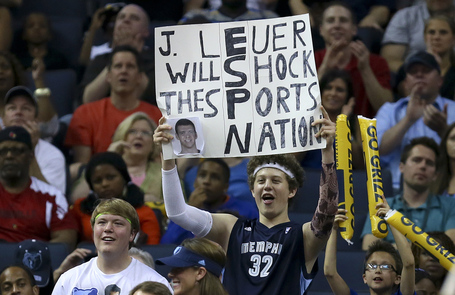 "It's not easy, you know, definitely not easy, once you start getting kind of comfortable in one spot and feel like you're learning, you have the system down, and then all of a sudden you get traded, and you have to pick up and move to a new city and find new relationships and new people," he acknowledged.

"It's definitely tough and different from college, but at the same time, you just have to know it's the nature of the business, and my mindset never changes wherever I'm at."

That mindset and attitude was shaped by his time at Wisconsin under coach Bo Ryan. "I've always been a hard worker, but coming into Wisconsin, you learn that you have to earn everything you get, and as a freshman, nothing's given to you," Leuer said. "That's something that's still in my mentality as I moved on to the NBA. I think, looking back on it, I appreciate that, you know, nothing was handed to me. I had to earn everything I had at Wisconsin from Day One."

The former All-Big Ten conference forward came to a team with two established, respected All-Stars in center Marc Gasol and forward Zach Randolph, who have made an influence on the second year player. "Their approach every day they come in is just to have a hunger and an attention to detail, that as a young player, you can really learn from that," Leuer said.

"Everybody's talented in this league and everybody can play, so it comes down to the little things and what your work ethic is everyday, and seeing those guys are two great examples of how to approach the game."

"Everybody's talented in this league and everybody can play, so it comes down to the little things and what your work ethic is everyday, and seeing those guys are two great examples of how to approach the game."

Although the San Antonio Spurs ended the Grizzlies' season earlier this week to advance to the NBA Finals, the former Badger, who only averaged 5.1 minutes in 19 regular season games for Memphis, gained some key minutes in the third quarter of Game Three last Saturday. Maybe some of that influence from Gasol, the NBA's 2012-2013 Defensive Player of the Year, rubbed off in his three minutes of play, grabbing two rebounds and swatting a nice block to help sustain their lead with his time on the court.

During his off days, he's been able to take in the city known as the hometown of Elvis Presley & Justin Timberlake, particularly one of its well-known commodities.

"They have great food here, so that's one thing I've been enjoying."

After a crazy year, two trades, and a great playoff run, Jon Leuer's journey appears well worth his destination.