Originally not recruited heavily and only having one year of high school football under his belt, the former Iowa defensive lineman remembers his time as a Hawkeye while starting to write his own legacy in the WWE.

Saturday morning begins a renewed era of the rivalry between the Iowa Hawkeyes and the Wisconsin Badgers, a battle between two football programs tied in their historic series at 42-42-2. The two fan bases can argue about the prominence of each state and each university. Iowa has its popular poll during the presidential election season. The University of Wisconsin has an abundance of alumni as CEOs in Fortune 500 companies. The University of Iowa brought you Gene Wilder, Tom Brokaw and Ashton Kutcher. The University of Wisconsin unleashed on the world Michael Mann, Frank Lloyd Wright and the mom from the TV show "Malcolm in the Middle."

But what about professional wrestlers?

One former Hawkeye, Ettore Ewen, who was working on completing his Masters, stepped away from academia and into the "squared circle" to become the World Wrestling Entertainment (WWE) superstar known as Big E Langston. Although his time on the football field was limited due to injuries, Langston remembers his time at Iowa fondly, where the work ethic he developed has helped keep the 27-year-old focused on his new career of bruising bodies in professional wrestling.

Langston grew up a wrestling fan in Tampa, Fla. The state of Florida was and still is a wrestling hot bed, formerly a staple of regional promotions associated with the National Wrestling Alliance (NWA) and now housing NXT (WWE's official development promotion) and the newly-minted WWE Training Center. His father, who moved from Jamaica to the United States in his twenties, would tell his son stories about watching the likes of "The American Dream" Dusty Rhodes compete at the Fort Homer W. Hesterly Armory in the Tampa area. Along with seeing more contemporary grapplers in his hometown, such as the late Eddie Guerrero, Langston's childhood was influenced by professional wrestling.

"I know Goldberg was kind of my idol when I was a kid, so I definitely grew up watching wrestling," Langston said.

His initial drive wasn't to wrestle and entertain tens of thousands of fans per week. He wanted to get on the football field, hoping to play in college.

Still, his initial drive wasn't to wrestle and entertain tens of thousands of fans per week. He wanted to get on the football field, hoping to play in college. But Tampa Preparatory School, a private school he attended from middle school up to his junior year of high school, did not have a football program. He did wrestle for Tampa Prep and even won a state championship at 215 pounds, but he decided to transfer to Wharton High School his senior year to pursue playing football.

Playing only one year of high school football, Langston didn't receive many offers to play college football. It was a chance post-season meeting with Iowa defensive backs coach (and current second-year defensive coordinator) Phil Parker, who caught Langston bench-pressing 315 pounds in a set of 10 in the Wharton weight room, that led to his late commitment to the Hawkeyes.

"I was very fortunate at the time because there aren't many people who get offered," Langston said.

His time at Iowa was riddled with injuries, as he suffered two major knee injuries in 2004 and 2005, keeping him out of action until 2006, when he gained some playing time on defense before a third ailment ultimately ended his football playing days. The former defensive lineman graduated and had actually finished the first year in his Masters program before a chain of events ultimately led him back to Florida and a developmental deal with the WWE.

"Things were going well there, but I was still not sure exactly what direction my life was headed and where I wanted it to go," Langston said.

A series of connections came to fruition in the form of a former teammate, Mike Humpal. Humpal, a former linebacker and sixth-round draft pick of the Pittsburgh Steelers, knew Mike Dougherty, a booster, who in turn knew then-WWE executive Jim Ross. After some conversations between Humpal and Dougherty, ones even Langston did not initially know about, they approached him about the idea of trying out for professional wrestling. He agreed and contacted the WWE, resulting in a tryout and ultimately a developmental deal in 2009. 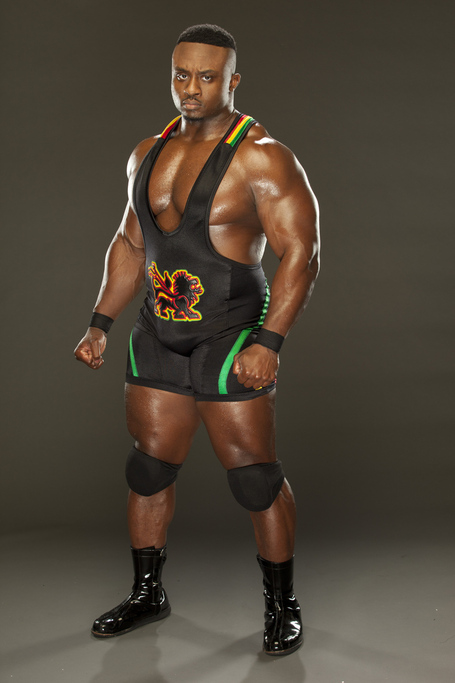 Under the name of Big E Langston, he shot up the ranks in Florida Championship Wrestling, NXT's former incarnation. He eventually became NXT's champion in December 2012, and was later called up to the WWE roster in late December as well, where he's stayed ever since. Being on the road for the past year and adapting to a fluid travel situation, from wrestling in front of a few dozen fans in smaller, local venues earlier in his career to the 80,676 fans he wrestled for in MetLife Stadium at Wrestlemania 29, has been the hardest part of the adjustment to the main roster.

"It's still a 20-by-20 ring, it's still kind of familiar, but I'd say the travel just because it can be very hectic," Langston said.

"I'm starting to get used to it. I have a routine now. We're leaving in about a week to go to Europe for, I think, 14 straight days for two weeks, so it's just getting used to long flights and sometimes having to get to the airport with no sleep or very little sleep. It's just the travel, but it's something that comes with the job, obviously a very rewarding job, but yeah, the travel is a bit of an adjustment."

The 5-foot-11, 290-pound athletic superstar credits Iowa head coach Kirk Ferentz and his strength and conditioning staff for helping him stay motivated to train and stay in shape while on the road most of the year. Instead of working out in the same weight room consistently as he did at Iowa, Langston has to find gyms in each city he wrestles in to lift at on a very strict and demanding work schedule.

"Sometimes you get into a town and you only have a couple hours to lift, Langston said.

"Sometimes, you have to lift with only three or four hours of sleep, so it's just something that's real life. You have goals to make every day, and you're always pursuing those." -Big E Langston

"Sometimes, you have to lift with only three or four hours of sleep, so it's just something that's real life. You have goals to make every day, and you're always pursuing those."

That work ethic has continued to help Langston stay in peak shape. He currently bench-presses 575 pounds, while also boasting a most impressive 750-pound squat.

Despite being away from Iowa for a few years now, he still holds Ferentz in high regards. Even after multiple injuries sidelined Langston during his career and ultimately led him to leave football, Ferentz would visit him in the hospital. It was his dedication to and his relationship with his players that has left an impression on the young superstar.

"Coach Ferentz is a guy who's always commanded respect, and he does it not by being loud or boisterous or in your face, but by the way he carries himself," Langston said.

"Someone who, I think, has always been a great leader."

As for the battle for the Heartland Trophy, which was awarded starting back in Langston's freshman year in 2004, the WWE superstar remembers the rivalry being hard-fought. He respected Wisconsin and its football program, and still holds the Badgers in a positive light, compared to other bitter rivals like Minnesota.

"I remember how good they were in the trenches, on both sides of the ball, year in and year out. Their offensive linemen were always one of the most physical groups that we would see all year," Langston said.

"As a defensive linemen, you respect what they bring to the table, but I would get amped up in knowing that I had to bring my best because they always had one of the best offensive lines in the country when I was there."

"For me, as I was out there and the day of, I tried to put all of that out of my mind, but it's honestly, one of the most unbelievable experiences I've ever had as just being out there in a crowd that big in New York in a moment that big," Langston said.

"Obviously, it's something I'll never forget, and hopefully, we have bigger and better to come."

Next Up In College Football