On a weekend that saw great news in the volleyball team winning the conference outright, but also some putrid performances by the football and hockey teams, the Wisconsin wrestlers (4-0 overall, 0-0 B1G) brought the positive vibes back by sweeping the competition at the Garden State Grapple on 27 Nov 2021.

The event was envisioned to be the wrestling version of the Big Ten-ACC Challenge, but it ended up with Wisconsin and Rutgers from the B1G and UNC from the ACC, with Hofstra the as-good-as-it-gets-for-an-ACC-stand-in team. First up for #19 Wisconsin was the #14 North Carolina Tar Heels. 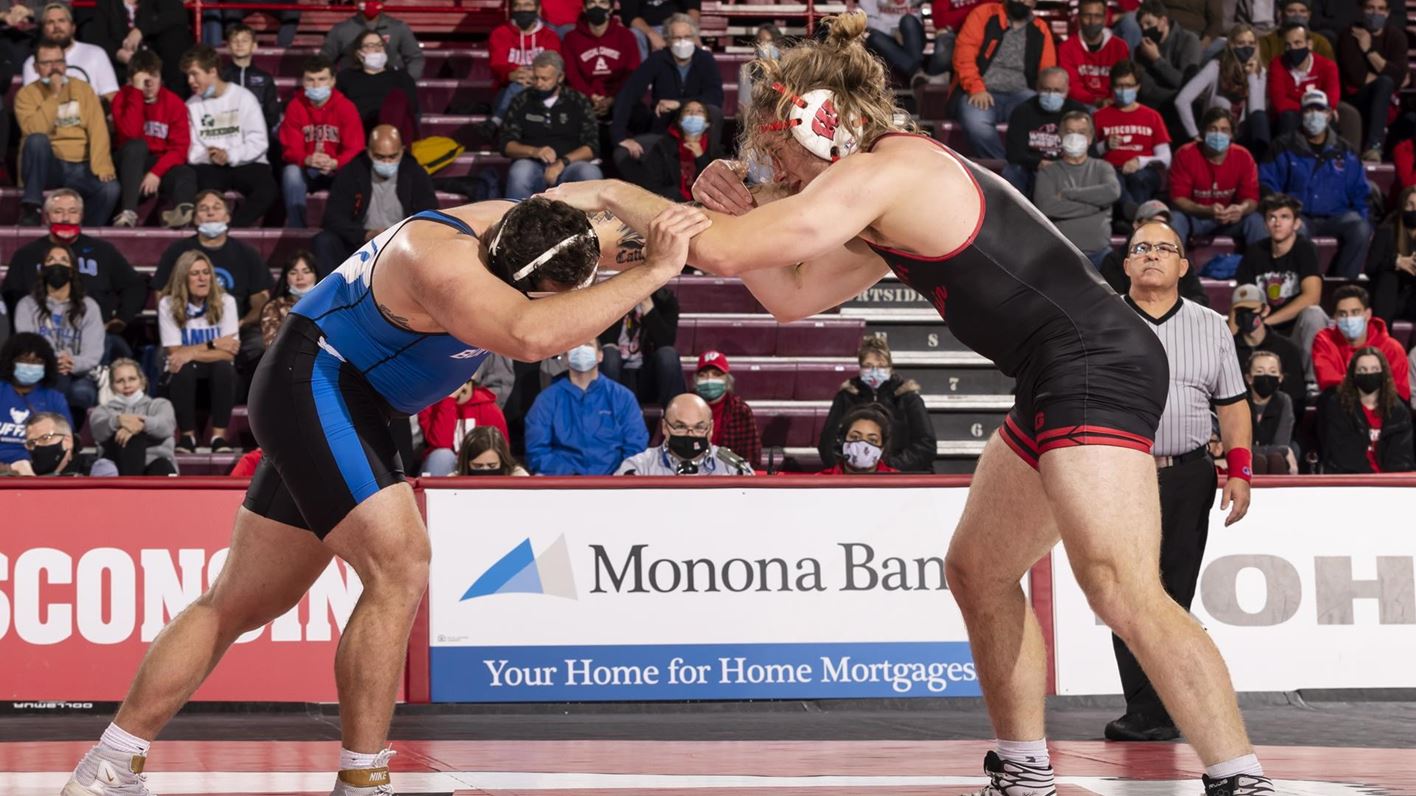 Hillger goes 2-0, both pins, vs UNC and Hofstra

The dual meet started out as expected, based on rankings: the Badgers jumped out to a quick 4-0 lead on a #6 Eric Barnett major decision at 125. Kyle Burwick wrestled tough against the #10 in the nation at 133, but lost a 7-3 decision. At 141, freshman Joey Zargo went against another 10th ranked guy from UNC and lost the first match of his college career in a 9-5 decision - he did not look completely outclassed, and it felt like he'd win if there was one more period to go. #19 Austin Gomez beat #16 of UNC at 149 for the minor upset and a 7-6 Wisconsin lead.

The reigning NCAA champ beat Garrett Model at 157 by major decision, not an unexpected outcome. On the other hand, freshman Dean Hamiti looked great in his major decision (10-0) win at 165, a weight class that had been considered a toss-up and a test of how good Hamiti really is. UNC's #15 beat #8 Andrew McNally for a small upset of the bad variety at 174, and the same thing happened at 184 where UNC's #24 guy decisioned #14 Chris Weiler. This left Wisconsin down 11-16, needing both the final weights to win their bouts for a dual meet victory.

And win, they did. Phenom freshman #16 Braxton Amos decisioned his #26 UNC opponent at 197 to pull UW within 14-16. #5 Trent "Thor" Hillger hammered any hopes the Tar Heels had of escaping with a win by pinning his foe to give Wisconsin a solid 20-16 win over a good, ranked team. Barnett, Gomez, Hamiti, Amos, and Hillger really looked good. McNally and Model's matches could have gone the other way and were closer than the score indicated. Zargo looks to have a high ceiling.

In the second dual meet of the day against Hofstra, the Badgers bruised the Pride in a dominating 38-12 victory. The Hofstra lineup featured several NCAA qualifiers, but Barnett, Rotonto (yeah!), McNally, and Hillger all pinned their opponents, while Gomez and Hamiti got technical falls to squash any scintilla of hope Hofstra had of pulling the upset. The hometown crowd couldn't take their eyes off of Jersey Boy Joey Zargo, who got a major decision to the great pleasure of those packing the Prudential Center. Model was handily in control of his match but got caught in a pin move right near the end, Weiler lost a 3-2 decision in a match he usually wins, and Amos lost for the first time in college in a match that went to overtime (a little winded?).

Overall, the Badgers looked great and left with a statement win, while also seeing a few things to work on. These were the last two dual meets before the conference season starts on 7 Jan 2022 when #16 Northwestern visits the Field House in Madison. In the interim, there are several open tournaments that will see all, some, or none of the starters wrestling against various levels of competition. The biggest and hardest of these is the Midlands Championship on 29-30 Dec. It will serve as a pretty good indicator of the potential for success at the season ending B1G and NCAA tournaments.