Holy cow! Have you seen Wisconsin killing it in the recruiting game lately? Clearly we'll be making that leap to the nebulous "next level" any day now. Well, in the words of Lee Corso, not so fast my friend. There's more context to be had here, and we should probably understand it before we start making travel plans for the National Championships in 2022 and 2023. While there's no question that our Wisconsin Badgers are making some serious gains on the recruiting trail, it turns out that other schools are also out there trying to get good players on their teams too. And sometimes they're even successful. Of course, sometimes they're not, too. And other times they're successful, but then not successful, then successful again, followed by ultimately not being successful. It's a tough world out there, man.

At any rate, before we get into the heat of B1G football, it's a good time to review just how well Wisconsin has been recruiting and how that's translated into the talent available on the team, before comparing Wisconsin to the rest of the conference. FYI, all data in this post is pulled from 247sports, with a preference for composite ratings when available. And no, recruiting stars aren't everything (stay off my back, beezer!), but when viewed from a team wide perspective, they're generally indicative of a team's chance for success. So without further adieu, how about that uptick in recruiting, eh? 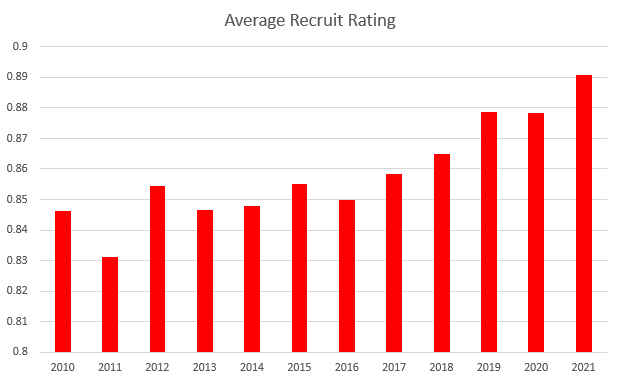 Look at those gains! Someone has been hitting the metaphorical weight room.

There's no mistaking it. Recruiting has been trending in the right direction under Paul Chryst. I'm not afraid to admit that I worried a bit about recruiting nationally when Chryst took over. Would Coach Dad resonate with players outside of Wisconsin? Well, I'm happy to report that I was dead wrong and apparently the answer is an emphatic "YES". Obviously getting higher rated kids means we're improving the talent available on the team year over year, right? To run out this obvious ground ball, let's take a look at the team average rating from 247's Team Talent Composite. This stat only goes back to 2015, but that 2015 value includes all of the talent that came in and was still on the team at that point, so it reflects as far back as 2011 commits who redshirted. 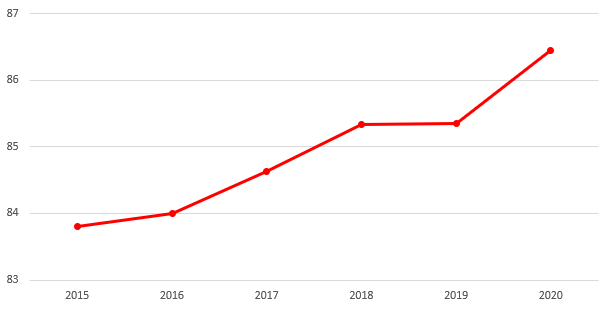 I hope you bought Wisconsin stock in 2015! By my math, every $1000 invested in 2015 would be worth...uh, oh, $1031.62. Ok, forget that analogy. But look at that chart, it just keeps going up! At this rate we'll be fielding a team with a perfect 100 rating in about 25 years. Seriously, it's clear that things are moving in a positive direction here. With the great 2021 class and the general upward trend in the first graph above, I would expect this chart to just keep rising. It's tough to predict exactly what the future numbers will be, but I'm expecting we'll end up somewhere between 87.5 and 88 next year. The last couple years of recruiting are really paying dividends with the level of talent on the team.

This is the point where a lesser investigator might brush their hands off and call it a day. All's good the neighborhood, am I right? Well, in the words of Lee Corso, not so -- sh*t, I used that one already, didn't I. This is harder than it looks, Drew.

Anyway, the first step to a shiny National Championship is to find a way to the summit of the B1G. Up until recently, I'd have just compared our info with that of OSU and called it a day. But it turns out the rest of the West has developed a pulse and needs to be accounted for. So first let's look at what everyone in the West has been doing in terms of developing team talent. This is the team talent composite again, over the past 6 seasons, with the latest values being for this year. This is not the visual style I was really going for, but it turns out that pivot charts don't like drawing lines between different series in the way I'd like, so you'll just have to deal with it. Each grouping is from 2015 through 2020, with each year highlighted in the same color for each team. And again, this is average player rating for the team each year. 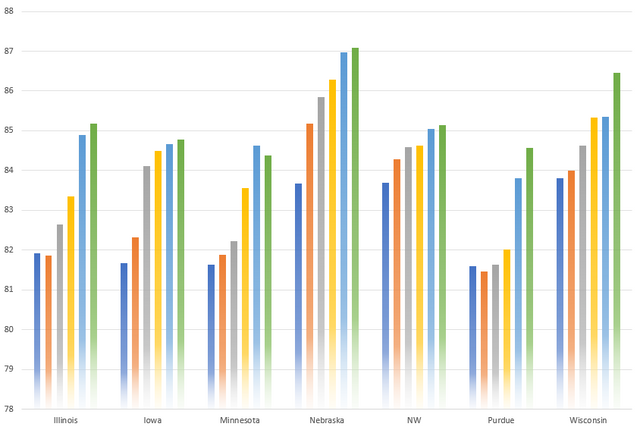 Ok, so what to make of this? Well, the clearest couple of takeaways are that everyone in the west has been improving, and that it looks like Nebraska and Wisconsin are out in front by a decent margin, while the rest of the division is lumped relatively close together. So is Wisconsin managing to separate itself, despite everyone else also making gains? Uh, no. In fact, every other team in the division not named Northwestern has actually outgained us. To quote DJ Tanner, "How rude!" So it turns out that despite our really positive movement on the recruiting trail, the job has probably actually gotten harder to make it to the title game. We'll see if the other teams can maintain the upward trajectory that I expect Wisconsin to hold onto for at least a couple more years, but in the here and now the road to the CCG has apparently gotten tougher, at least from a talent comparison standpoint.

Other takeaways of note? Nebraska somehow shot through the moon under Mike Riley despite losing a whooooole lot of games, and has actually cooled off a bit (pun!) under Frost. Both Purdue and Illinois are seeing massive improvements directly corresponding to their latest coaching hires. Minnesota saw a similar trajectory, but is it possible that recruits are starting to see through the schtick? Only time will tell. Aside from that, look at how clear the tiers were back in 2015! Wisconsin, Northwestern, and Nebraska all lockstep with each other, then a massive drop off and the rest of the division all tightly grouped as well.

Luckily, Wisconsin always manages to get 4-star production out of a few walk-ons, and the coaching is better than rest of the division, so let's just assume we'll continue to be the default pick for the division for the foreseeable future. What then is going on in the rest of the conference? 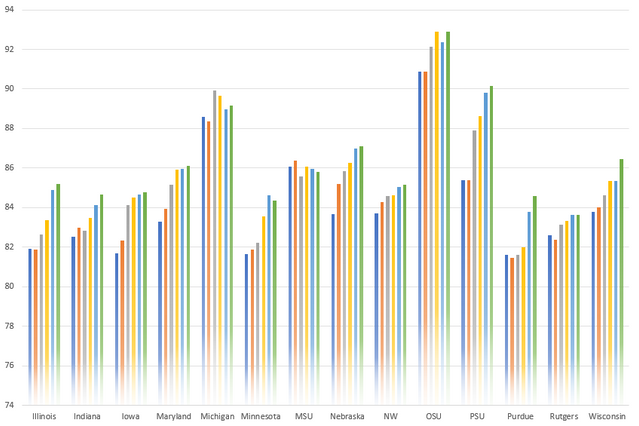 Seriously? Damn near the whole conference has made significant improvements across the board in terms of talent level. This conference is getting tough. However, there's more context here. Our ultimate goal is to catch up to the top of the East. And in this regard, we're actually making some progress. OSU is somehow still improving despite fielding a team full of future draft picks, but they're not improving quite as fast as Wisconsin. And Michigan has been stalled out at around the same level for the last 6 years, so we've made some pretty sizeable gains on them. You'll see PSU has absolutely shot through the roof, but I think that corresponds to sanctions getting lifted so I'm not getting too worked up about it. And what with Franklin whiffing on basically every single top target in 2021, I expect they'll level off going forward. Unfortunately, even with the gains we've made on the top teams in the East, there's still a very clear gap in the caliber of player between Wisconsin and the triumvirate of OSU, UM, and PSU. It seems pretty clear that OSU remains alone at the top in the first tier, followed by PSU and Michigan in tier 2. Things get a little muddier with where you draw the lines below that, but it's clear that Wisconsin is still hanging out in Tier 3.

Interestingly, the East in general has not improved nearly to the same degree as the West. While practically the entire West division has outgained Wisconsin, only 2 teams in the East have done so (and one of them is PSU, with the mitigating factor of the sanctions getting lifted). Indeed, the only team to have gotten worse over the last 6 years (though admittedly just barely) is MSU. It would seem that the West is absolutely closing the gap with the East.

For an easier look at how every other team in the B1G has fared accumulating talent relative to Wisconsin, here's a chart showing how Wisconsin has improved relative to the other teams in the B1G. If the value is above zero, then we've either improved more (we've closed the gap with teams ahead of us, or widened the gap with teams below us). The opposite is true for values below zero.

Ok, but what does all this mean? Well...first off, the biggest takeaway is that all the money being brought in by the Big Ten which has been funneled into coaching salaries and facilities appears to have been working. For Wisconsin specifically? Well, it appears to be getting tougher to make it out of the West, but a little bit easier to match up with whomever the East sends to the conference championship. I think that's a good thing. Contrary to the path that Clemson has taken many years, I believe in the idea of playing the best competition to become the best possible team. I considered pulling some more numbers for the top teams nationwide for comparison, but honestly we won't have to worry about it if we can't be OSU. They're pretty representative of the rest of the elite teams from a talent standpoint. Given there's still a sizeable gap, we're going to continue ramping up recruiting and/or we're going to have to count on coaching and unheralded walk-ons who turn into studs (be sure to click that link and buy the book). Wisconsin has a documented history of outperforming their recruit rankings, so the gap is probably not as great as it appears in these graphs, so there's absolutely hope. But that blue chip rating threshold for a NC has been pretty reliable. We're almost certainly going to need a little bit of luck on top of everything else.

(Also, if you go poking around at 247 for those composite rankings, you'll see that they have a point system set up to evaluate teams beyond just an average player rating. It works pretty similar to the way class rankings work, from what I can tell, with the top players weighted more than the bottom ones. Theoretically it might highlight differences in depth, so I considered adding that info or using it instead. But glancing at it I'm pretty sure we'd see graphs/charts that look almost exactly the same as the ones above, just with different numerical values. Since average rating seems to be more readily digestible and understood, that's what I used.)