I am hyped for the Cotton Bowl

Share All sharing options for: I am hyped for the Cotton Bowl

Let’s get this out of the way: I am a mark for bowl games. A full-bore, slack-jawed, merch-buying, it’s-still-real-to-me mark.

I readily acknowledge that these games are, for the most part, craven cash-grabs with ridiculous title sponsors and outrageous swag bags. I recognize that, more often or not, they feature less-than-marquee matchups or East Coast teams that would rather be any place else but Detroit for Christmas. Well, maybe not any place. But when the Ragin’ Cajuns of UL-Lafayette make their annual trip to the R+L Carriers New Orleans Bowl, I know that three weeks of fun is about to commence.

This year, I am very excited for Wisconsin’s trip to the Cotton Bowl. For reasons that remain unclear, it appears that I am the only one.

Tickets for this game are brick-of-Natty-Light cheap. Fan interest in traveling to the game is way down. Woeful gnashing of teeth at what might have been is way up.

On the one hand, I get it. The Badgers were just at Jerry’s World last year. Arlington is the St. Paul of Texas. Western Michigan is simultaneously both terrifying (what if we lose?!) and unattractive (so what if we win?!). The Rose Bowl was soooo close and the Penn State game was tough on mind and soul. Travel fatigue is setting in. Thanks to the NFL, the game is on Jan. 2, which is, at best, only the third or fourth-best day in January. I get it, I really do. 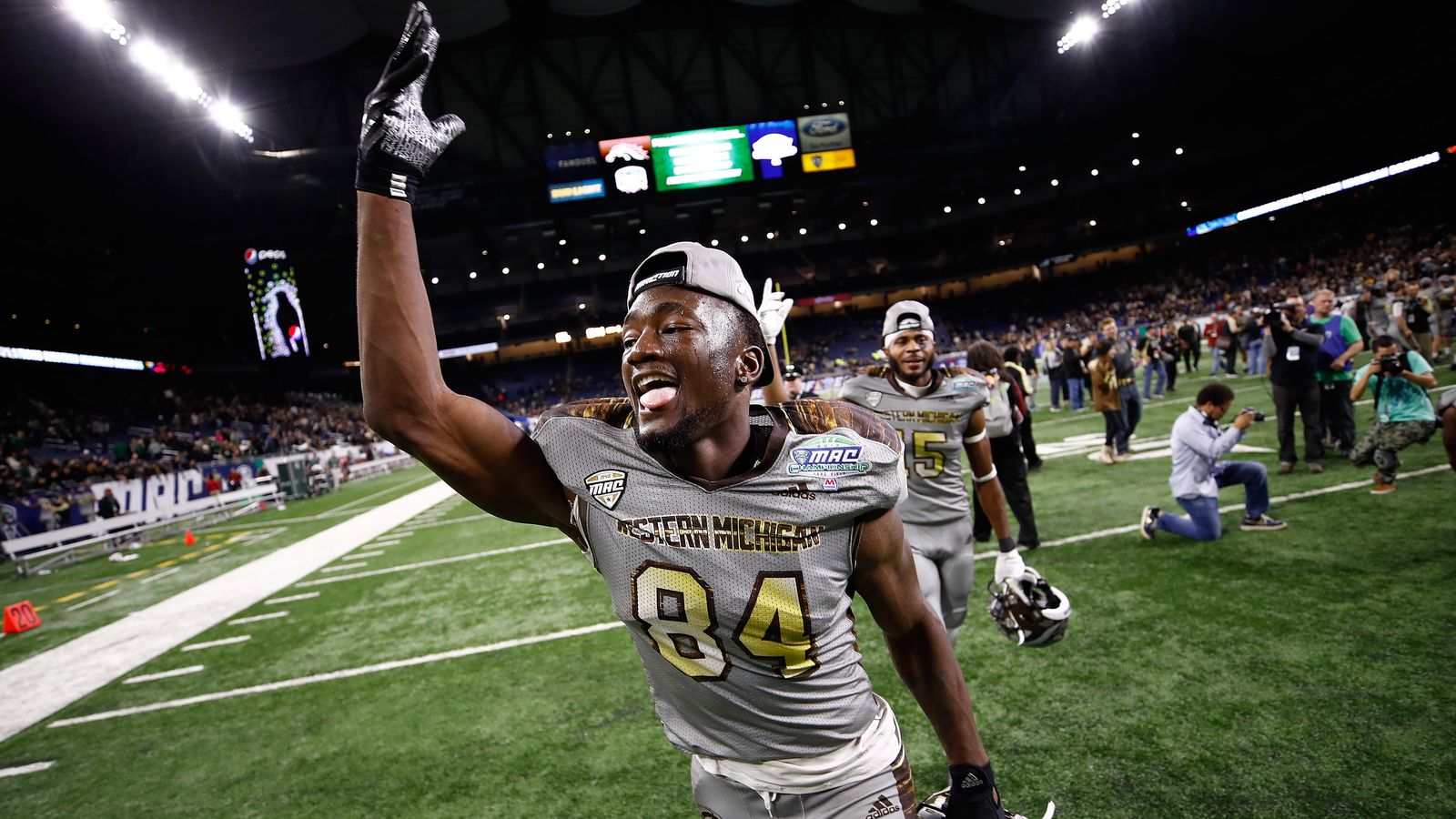 What are the Badgers getting into when they step into Jerryworld?

This is a New Year’s Six bowl game. It’s the first time the Badgers have played in the game. It is a chance to end the year with a bang on a national stage. I am hyped for this game. And here’s why you should be too.

No. 1: This is a strength-on-strength matchup.

In Rosin’s quick primer on the Broncos, he highlighted Western Michigan’s efficient, balanced offense. Wide receiver Corey Davis is projected by some sites as a first-round draft pick. The Broncos sit 16th nationally in total offense, averaging nearly 500 yards of offense per game, and eighth in scoring offense, averaging 43.5 points per game. The Badgers, on the other hand, sit seventh in total defense, fourth in scoring defense, and first overall in defensive p***ed-offedness.

This is a legit, strength-on-strength game and a real test for Wisconsin. It is one last chance to prove itself against a real, honest-to-goodness offense with Sunday-caliber weapons. Will the defense right the ship after the Penn State debacle, or do the Badgers still have a ways to go against pro-level receiving talent?

It’s an intriguing narrative and should be a heck of a watch.

No. 2: This may be the start of a beautiful enemy-ship with P.J. Fleck.

For all the “Row the Boat” jokes made at his expense and his history of asinine behavior, Fleck is a pretty good coach. He has a track record of offensive creativity and has developed quality wide receivers in both college and the pros. Speculation was high that he might take one of the open Power Five jobs this year, but none have yet come to pass and it looks like he’ll return to Western Michigan for the 2017 season.

Fleck is an Illinois guy who played at Northern Illinois and whose coaching stops include Ohio State (under Jim Tressel), NIU (under coaches including Jerry Kill) and Rutgers (under Greg Schiano). He recruits the land of Great Lakes well and his Western Michigan team is heavy with talent from the Midwest.

If he repeats this performance in 2017, he will have his pick of Power Five gigs. It looks like he’s a pretty discerning guy, so it will be interesting to see what he’s looking for in his next stop. But peering into the crystal ball, he may have options in the Big Ten. Without marked improvement, Illinois may be open next winter. So might Rutgers. Both of those jobs would make a lot of sense if Fleck is looking for something familiar that he can build in his own image.

It may be that the Cotton Bowl is just Round 1 of a blossoming rivalry with He Who Rows the Boat.

No. 3: Pride goeth before The Fall.

We greedy, pride-filled, covetous fans have enjoyed an unprecedented run of success from Barry (the Wise) to Bret (the Derp) to Gary (the I-Just-Can’t-Handle-This) to Paul (the TBD). In the Badgers’ success and our blinding avarice, we have forgotten what truly lean years look like.

Here is an inclusive list of Big Ten teams who would trade places with Wisconsin for its Cotton Bowl slot in a heartbeat: Nebraska, Iowa, Minnesota, Northwestern, Maryland, Indiana, Rutgers, Illinois and dearly departed Michigan State (note: Purdue is perfectly fine sitting this one out, thank you very much).

Enjoy these opportunities while they last, greedy fans, for nothing lasts forever. Ohio State was in the wilderness for a long while post-Tattoogate (#ncaaissodumb). Michigan was, too, after the Rich-Rod and Brady Hoke hires. The end of the Bo Pelini era at Nebraska was not terribly pleasant for the Big Red faithful, though that was mostly Wisconsin’s fault.

Sparty is a cautionary tale. Two years ago. they were in this very game, hanging an epic comeback on noted dirtbag Art Briles. Last year, they got drilled by Alabama, also at Jerry’s World. This year, they melted down like a Chernobyl grilled-cheese and don’t have a clear road back in a division that boasts three really good teams returning a lot of talent (and Maryland).

So savor this glorious New Year’s Six bowl all you proud, wrathful, greedy fans (while not directly relevant to the story, I note that we are also gluttonous, lustful sloths). You never know when the next one will come around.

No. 4: This is the last time we get to watch a special team.

I assume that if you are reading this you are (1) at work and (2) deeply, emotionally invested in the Wisconsin Badgers football team (or, I suppose, (3) being punished for something in a particularly cruel and innovative way).

This has been a glorious, baffling, expectation-defying season. It is likely that, despite issues in coverage over-the-top, we are watching one of the great historical Wisconsin defenses. This is a special team.

The Cotton Bowl will be the last time we’ll see the seniors in cardinal and white. It’ll be the last time out for Corey Clement and Dare Ogunbowale and Leo Musso and Robert Wheelwright and Vince Biegel and Bart Houston and a bunch of others who sweat and bled for the program. It might also be the last time we get to watch Ryan Ramczyk and T.J. Watt play for the Badgers, too. We’ve enjoyed watching these young men grow over the past few years. I want to see them go out big on a big stage.

The last time the Badgers played a bowl after a disappointing Big Ten title game was the Outback Bowl two years ago against Auburn. That surprising win wiped away some of the pain of the loss to Ohio State and was a spring board for a pretty good season the following year.

Fleck would love nothing more than to add a Badger pelt to go along aside his wins against Illinois and Northwestern. I would love nothing more than to see Wisconsin blow the doors off of his undefeated team. I want the commentators to get into their garbage-time commentary midway through the third quarter. I want every senior on the roster to play. I want that rugged, carnivorous defense to take the air out of the ball and for the Clement-Ogunbowale-Bradrick Shaw hydra to hang 400 yards on the ground on the Boatrowers.

I am hyped for this game.