Western Illinois vs. Wisconsin: Looking back at Badgers' win

How do you feel about the Badgers' victory the day after? Sit down with your coffee, juice and/or Bloody Mary (especially necessary after yesterday's Big Ten results).

Share All sharing options for: Western Illinois vs. Wisconsin: Looking back at Badgers' win

It's Sunday morning -- how ya feelin', Badgers fans?

After a disastrous day for the Big Ten Conference -- Michigan State, Michigan, Ohio State losing to Power 5 conferences, Nebraska and Illinois barely hanging on against seemingly inferior competition, and Purdue and Northwestern just losing -- No. 18/19 Wisconsin did what it was supposed to: beat an FCS team in Western Illinois.

But not by the way everyone thought they would. The Leathernecks seemed to have 13 guys in the box to stuff the run, and the offensive line could not get the push off the line of scrimmage for the majority of the afternoon.

So who do you turn to after your most potent offensive weapon, Melvin Gordon, was held at one point to eight yards on nine carries?

Tanner McEvoy and the passing game, of course.

The Badgers aerial attack accounted for 289 passing yards and four touchdowns against the Leathernecks. With that, let's take a quick look at Saturday's game.

McEvoy only had five incompletions on the afternoon, throwing for 283 yards and three touchdown passes. He also showed off his mobility, running for 55 yards and Wisconsin's first touchdown. That's 338 total yards and four of Wisconsin's five scores.

Yes, it was against the Leathernecks, but the offense took steps forward in its passing game.

"Offensively, we needed a game like this," McEvoy said.

After the #B1G weekend throughout the conference, this might very well be the case from our very own Andrew Rosin:

Tanner McEvoy may be the Big Ten offensive player of the week this week.

Granted, Nebraska's Ameer Abdullah might take the cake with this catch and run alone (note the amazing Super Mario music in the background).

Erickson had a career-high 10 receptions (1 more than his total receptions in 2013) for 122 yards and his first touchdown. He now leads the team in receptions with 13 through two games, and appears to be a likely go-to target for McEvoy.

Same can be said for Arneson. The senior tight end asserted himself as a dependable target Saturday, reeling in two big third-down receptions and a 37-yard catch that set up Wisconsin's first touchdown in the second quarter.

First, junior safety Michael Caputo's interception. A 2nd-and-9 pass from the Wisconsin 13 with Western Illinois driving, redshirt freshmen Chikwe Obasih tipped a Trenton Norvell throw that wound up in the hands of Caputo, who returned it to the Wisconsin 35. The Leathernecks (side bar: I kinda dig their mascot name) were driving deep into Badgers' territory as they utilized their spread attack, and if not for the turnover, the Badgers could have been down in the first quarter. The Badgers got a stop when they needed it, and did not allow a touchdown on Saturday. 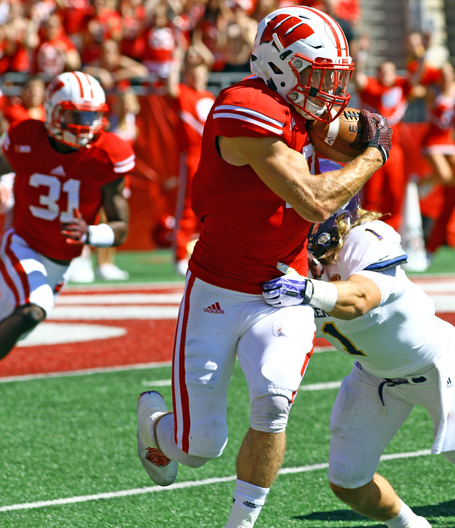 Second turning point: The Badgers third drive of the game. Yes, the team didn't score on this drive, and were actually stopped on a 4th-and-1 inside the Western Illinois 10, but Wisconsin found the formula that they'd ride to victory -- a passing game. Out of the 17 plays, 10 were passes -- 8 were completions. It was also the starting point to McEvoy's 17 consecutive completions after sophomore receiver Reggie Love dropped a would-be touchdown. During the completion streak, the Badgers scored 21 points.

"Yeah. Yeah. He's just gotta get his confidence up and get in that rhythm and once he get in it he's a bad boy," Gordon said after the game, which gained some laughs from the media.

If this week couldn't become any more odd after the Melvin Gordon and Joel Stave situations, the opening kickoff in the game bounced off of junior running back Kyle Hammonds. The ball bounced out of the end zone, but Hammonds then brought it back in. Officials initially called it a touchback. After head coach Gary Andersen challenged the play, officials reversed the play, confirming it was a safety -- giving Wisconsin an early 2-0 lead one second into the game. Our own Grey Satterfield has a great photo of it. 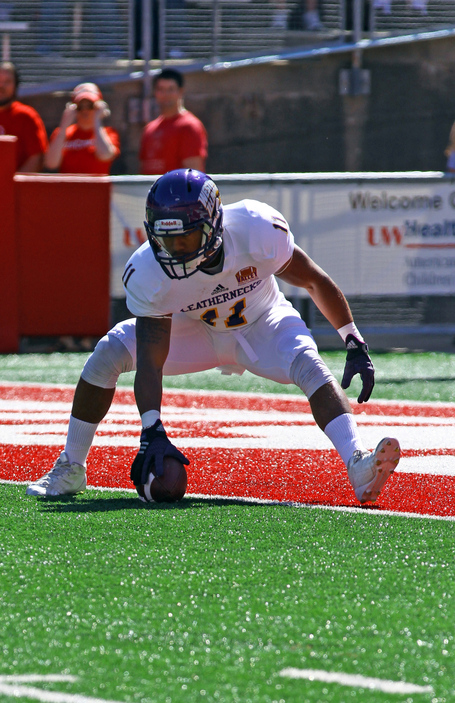 A game of firsts

A lot of young players getting playing time, and a lot of new faces in the spotlight. Obviously, there'd be a lot of firsts:

A week off and then the Bowling Green Falcons, who are without quarterback Matt Johnson for the remainder of the year with a hip injury. It's another week to rest up any injured players, though a few noted after the game it's a little early for a week off.