Wisconsin vs. LSU: Breaking down the Badgers' 2nd-half play-calling

The question so many Wisconsin fans have been asking this week: What was offensive coordinator Andy Ludwig doing in the second half?

Share All sharing options for: Wisconsin vs. LSU: Breaking down the Badgers' 2nd-half play-calling

Any time you dwindle a three-score lead by giving up 21 unanswered points in the second half, there is going to be an abundance of questions about what went wrong. The tone of those questions was what baffled Wisconsin fans even more in the wake of Saturday's devastating loss. Was there a mutiny at halftime? Is that why Joel Stave didn't come in and Melvin Gordon received only four carries in the second half? How else do you explain the play calling?

We received relatively reasonable answers about Stave and Gordon, so I'm here to attempt to answer the final question: What was offensive coordinator Andy Ludwig doing in the second half? 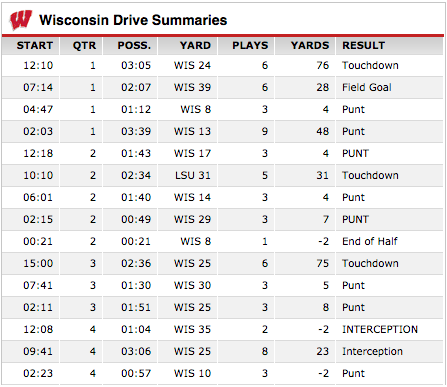 When I "sat down" (more like curled into the fetal position) to re-watch the game, I expected the answer to be a tirade against Ludwig and his idiotic play calling. That tirade comes, but, much like the overall game, it comes in two halves.

Let's pick up with the Badgers' second drive of the second half, when UW led 24-10. Wisconsin begins with a play-action, max-protection pass that sends George Rushing on a fly and Alex Erickson 15 yards across the middle of the field. Rushing gets single coverage, but the defensive back is able to stay with him and utilize the consistently loose referees by barring Rushing away from the ball with his arm. 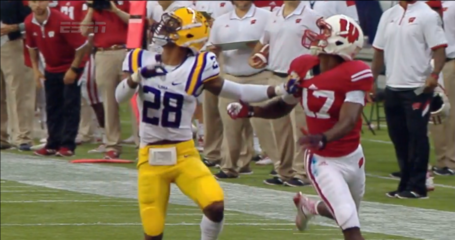 Would I have liked a higher-percentage look? Sure, but I also understand the reasoning of wanting to stretch the field. After all, this is when LSU began loading up the line of scrimmage even more than it had been.

The drive ended after an option-read was blown up on second down and Tanner McEvoy scrambled for a handful of yards in essentially an insurmountable 3rd-and-12 situation.

The following drive was equally unproductive. Gordon was stuffed on first down, Reggie Love's indecisiveness and a good play by a defensive back stopped a bubble screen in its tracks and Jordan Fredrick was stopped short on third down after completing a crossing route.

Again, there's not a lot to complain about here. Gordon gets a touch; the bubble screen deserved another look after Erickson took it for a first down in the first half, and there's not much Ludwig can do on 3rd-and-long.

Gordon starts another drive with a carry and picks up a couple yards. Ludwig seemingly attempts to establish the run as Gordon receives the ball again on the next play, but it's quickly blown dead by a false start. I say "seemingly" because the announcer mentioned it might have been a flea-flicker, but it looked more like Gordon was just turning around in frustration and Tyler Marz was already releasing into the second level.

Then, for one of the few times all night, McEvoy gets an open receiver to pass to. Troy Fumagalli creates space along the sideline on a wheel route, but McEvoy attempts to lay the ball in and gives the defensive back time to come over and intercept the pass. Can't fault Ludwig for that one.

Finally, down 28-24 with about 10 minutes left, we see some vintage Wisconsin football. Three straight Corey Clement runs add up to a first down and are followed by a 9-yard completion to a tight end in the flats and another first-down run.

Ludwig attempts a play-action pass that falls incomplete to start the next set of downs. I'm not going to complain about this one; it was a good play by a cornerback that was just inserted into the game against a solid 10-yard out route. 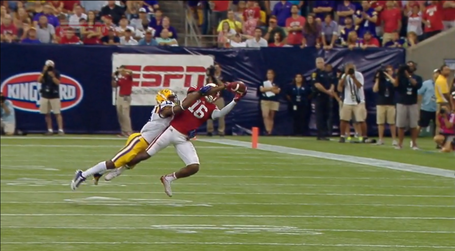 This is where the Ludwig apologist dies. It's 2nd-and-10 with around seven minutes left, and UW has the ball at midfield. Prior to this drive, the offense has been on the field for under five of the last 17 in-game minutes and gained 13 yards during that time. The defense is understandably tired and getting torched. After sitting out this entire crucial drive, your Heisman Trophy contender at running back, who has also been effective all night, is now in the game. In other words, it's four-down territory.

Instead of calling a run, or at least giving McEvoy a comfortable look, Ludwig spreads out the offense and attempts back-to-back shotgun passes. McEvoy immediately flails the first one of bounds, then just as quickly floats the second one into the hands of a defensive back. Neither play stood a chance, just like they hadn't all night. McEvoy completed three shotgun passes out of, by my estimation, close to 15 attempts. One of those came on the first pass of the game and another was a deflected pass into the hands of lineman Kyle Costigan for a loss.

There were situations when these sort of plays were the only option for Ludwig to call. At that point in the fourth quarter, not only were they unnecessary, but they should've been a last resort. Ludwig still had three plays and his entire playbook open to get 10 yards, yet he draws up a couple looks that had proven time and mind-numbingly time again not to work throughout the game. The receivers couldn't get separation, McEvoy was completely flustered in the pocket, yet we saw plays that completely relied on the opposite of those two things happening.

Wisconsin goes out with a whimper. A questionable, to say the least, short-side read-option doesn't get by the line of scrimmage. Then the offense fittingly ends with a pair of broken pass plays out of the shotgun.

I give Ludwig a pass for most of the half. In large part, he attempted the same things that worked previously. That was a good-looking LSU defense, filled with athletes all over the field and especially on the back end. It's natural for a currently unreliable receiving corps and a quarterback making his first FBS start to struggle.

What's inexcusable is Ludwig putting them all in the position to fail. Players have to step up and make plays, but a coordinator has to be able to identify what is and isn't working, and adjust accordingly. On Saturday night, only one offensive coordinator was able to do that.