The injury to the junior fullback/tight end will force the Badgers to get creative.

Wisconsin's injury reports have piled on this week, to say the least. Monday, head coach Gary Andersen confirmed a hip flexor injury suffered by star running back Melvin Gordon vs. LSU, which limited him to four second-half carries against the Tigers (though he's expected to play Saturday).

Then, of course, the Joel Stave controversy hit Tuesday.

It's also been a mixed bag of news for the Watt family this week. Earlier this week, J.J. Watt, the monstrous former Wisconsin defensive end turned best defensive player in the NFL, signed a six-year, $100 million extension with the Houston Texans, with $51.8 million guaranteed.

DE Warren Herring had right knee surgery today and is out 4-6 weeks. FB Derek Watt had right foot surgery and is out for about 8 weeks.

Herring's injury and his extended absence reduces the depth of a young, defensive line that became gassed during the third and fourth quarters of Saturday's game, though the possible return of senior defensive end Konrad Zagzebski should help.

Watt's injury, however, might be just as critical to an offense that is thin in depth at the fullback position, though his possible return in November couldn't be more needed when the Badgers take on Nebraska, Iowa and Minnesota with a possible Big Ten West division title on the line.

Watt, a converted linebacker, made splashes his redshirt freshman year, taking over for Sherard Cadogan at fullback. He's held onto that position for the past two seasons, opening up holes for Gordon, Montee Ball (including his FBS record-breaking touchdown), James White and Corey Clement while becoming a pass-catching option in the flats (12 receptions for 150 yards in 2012).

Offensive coordinator Andy Ludwig and Andersen announced during the spring Watt would also play some tight end to utilize those pass-catching skills with an unproven but deep tight ends position group. Watt worked as a hybrid tight end, both in H-back and U-back looks during the spring and into fall camp.

During Saturday's loss, Watt was lined up at fullback in a lot of 21 personnel looks -- two running backs and one tight end, usually in an I-formation -- but also in a hybrid-tight end look at least a half-dozen times, which included sophomore wide receiver Reggie Love's 45-yard touchdown run in the first quarter. Watt is the tight end lined up off the line of scrimmage at the top of the screen: 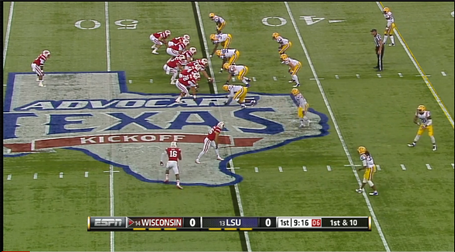 Though the Badgers are deep at tight end, Watt provided Wisconsin with game experience and a unique skill set when called upon, and his role as the lead fullback will be missed for the better part of the season.

On all three touchdowns Saturday, Watt played a role in leading the way for Love, Gordon and Clement. For Love's run early in the first quarter, Watt lined up as a tight end to the left. He kicks out the defender with a block, allowing fellow tight end Sam Arneson to go to the second level, which helped spring Love for the score. 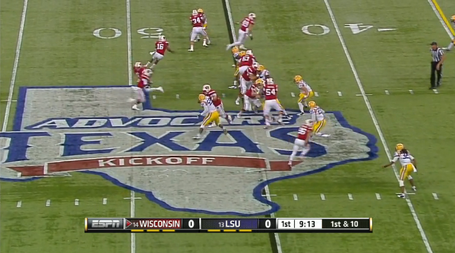 For Gordon's 14-yard run, Watt took on a defender at the line of scrimmage, allowing the Heisman Trophy candidate to find daylight and a Wisconsin 14-7 lead. 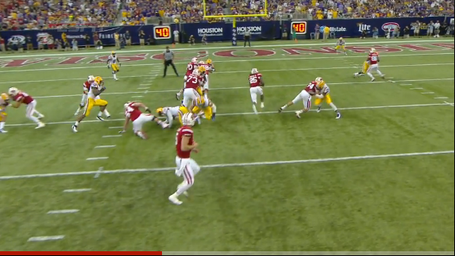 Not to mention, he led Clement on a key fourth-down run on Wisconsin's first drive of the second half out of the 23 personnel, as well as the ensuing touchdown the next play in the same I-formation, three-tight end set.

Fellow junior Derek Straus, before his collarbone injury, was a solid back-up to Watt at fullback, starting for a game when Watt was injured last season and catching a touchdown pass against Tennessee Tech. However, the fourth-year junior is still ailing, which now puts freshman Austin Ramesh in the forefront as the key back-up until both Straus and Watt return.

With #Badgers FB Derek Watt out, Ramesh and perhaps Spurling on deck. Straus still out.

Ramesh received a bulk of carries in the spring game, but Andersen has stated previously he wanted the 6'1, 247-pound freshman to play fullback. It would be his first time playing in a collegiate game in the offensive backfield.

Based on this injury, it's worth noting how the Badgers' offensive personnel will shape up. For the rest of the non-conference games, it may not matter as much, but there will be adaptations to the schemes they present. Along with the likely possibility of Ramesh getting game experience in the coming weeks in 21 personnel, one can assume more two-tight end sets will also emerge in Ludwig's offense to offset the loss of the versatile Pewaukee native.

If Watt can make it back in time for a crazy November, he'll be needed during the important stretch where the Huskers, Hawkeyes and Gophers all will be battling for a chance at the Big Ten title game.