Injuries to two main contributors on the defensive line, along with a handful of big plays by the LSU offense, ultimately doomed Wisconsin's chances to hold on vs. LSU.

Welcome back, Wisconsin football fans. The 2014 college football season kicked into full swing last weekend, and many of you are still recovering from a stinging 28-24 loss to the LSU Tigers on Saturday. On paper, the loss seemed what many had predicted, but those who watched the game realized how close Wisconsin came to beating an SEC powerhouse, and how it slipped away within a quarter-and-a-half -- notably after the injury to Warren Herring, but it started a drive before that

We're bringing back B5Q's defensive reviews this season, and there's a lot to digest from Saturday's stunner.

9: Tackles for loss by UW

What went right for the offense?

The Badgers managed to run the ball effectively against a solid SEC defense on Saturday. But when LSU dared the Badgers to attack through the air, the offense proved to be ineffective.

What went right for the offense?

136: Total yards gained by LSU in first half

229: Total yards gained by LSU in second half

6: Longest drive in terms of plays for LSU in first half

9: Longest drive in terms of plays for LSU in second half

3: Drives ofeight8 plays or longer for LSU in second half

For those that don't know, we'll talk about offensive pairings in two-digit speak. For example, if someone is in a "21" personnel, that means there are two running backs and one tight end on the field. A "32," like you saw last season with Melvin Gordon running the fly sweep with James White and Derek Watt in the backfield, along with tight ends Brian Wozniak and Jacob Pedersen, would be a three-running back, two tight-end set.

LSU, in the first half, ran what mostly appeared to be 21 or 12 personnel. To counter, Aranda utilized the standard 3-4 (three defensive linemen, four linebackers) base defense. If the tight end played off the line in the slot, you saw sophomore linebacker Joe Schobert split out wide to cover at times.

The Tigers also utilized an 11 personnel grouping mostly out of the shotgun. Wisconsin brought a nickel look in the game of football chess here. Last year, you saw a 2-4-5 look implemented with two defensive linemen, four linebackers and five members of the secondary. Two of the four linebackers, mostly Schobert and fellow sophomore Vince Biegel, were on the line standing up as pseudo-linemen.

The Badgers also utilized a 3-3-5 scheme, where three down linemen were in there. Alec James came in at the beginning of the game in this look, but he was also utilized in the 2-4-5 look when both seniors Herring and Konrad Zagzebski left the games with injuries. Senior inside linebacker Michael Trotter was seen in at least one of these nickel packages as well.

LSU, for the second half, went with a bigger look to start, utilizing a two-back, two-tight end offense (22). Wisconsin ran a base 3-4 look with four defensive backs, but took out a cornerback and inserted redshirt freshman safety Joe Ferguson, playing three safeties on the field. This allowed junior safety Michael Caputo to play up in the box to stop the run.

Along with the 21 personnel working for LSU (while Wisconsin primarily used the base 3-4), the 11 personnel was implemented in that doomed second half that forced the Badgers to go to the 2-4-5 nickel look while undersized in the middle, and it was quite effective on a couple of drives when Hilliard was a beast in some zone-read looks.

Though the Badgers fell, two make "B5Q's Defensive MVPs List." In similar fashion to the NBC "Sunday Night Football" bus, I'll display a sticker with their number on my Ford Escape for an hour this week. One is Michael Caputo, who registered 15 total tackles (six solo, nine assisted; Gary Andersen mentioned 20 in his Monday presser, but I'm going off the game stats). Caputo said a couple of weeks ago he worked on his pass coverage, and it showed on a nice pass breakup in solo coverage undercutting a route in the first half. He has a sense for the ball at all times, as he recovered a fumble that led to a Badgers touchdown the drive after. Last year, he showed he could start and was an All-Big Ten honorable mention by the media. This year, he has a chance to break out even more, and he's just a junior.

"Unbelievable game out of that young man," Andersen said Monday.

Marcus Trotter is a great story. Former walk-on, stepped up big at Illinois and Iowa last season when Chris Borland was injured. Saturday, he had 12 total tackles, led the team in tackles for loss with 2.5 and registered a half-sack. It seemed like he was in on every rushing stop and plugged the holes quickly against Hilliard, Fournette and Terrence Magee early on. Andersen also praised Trotter for both he and Landisch's work on Saturday, though he said there needed to be some changes late in the game when some freshmen were inserted during critical times with injuries mounting.

That Zagzebski and Herring escaped major injury. Yes, this isn't technically during the game, but news Monday of both seniors escaping major injury is huge. The Zagzebski head injury was a scary sight for all to watch, but hearing news Saturday night/Sunday morning that he flew home with the team always trumps game results. Neck/head injuries are always lurking when playing this game. Thankfully he's okay, and Andersen noted he should be ready by this week, if not two weeks from now. Herring is "day-to-day" per Andersen, but many thought the worst (ACL tear) when he was rolled on in the third quarter. It did not look pretty. Both, if they're able to, will be depended upon to restore depth on the defensive line that was gashed.

Owning the line of scrimmage for the first 2 1/2 quarters. Through three quarters overall, Wisconsin held LSU to 225 total yards (49 rushing). In the first half, the Tigers had nine drives; outside of the 80-yard touchdown pass to Dural, only one went more than six plays. LSU had only 56 total yards gained from the rest of its drives. Wisconsin got on and off the field, resting its defense.

Third-down conversions. Except for the fourth quarter, where LSU converted four of its five third downs, Wisconsin forced three three-and-outs and held LSU to 6-of-17 on its third-down conversions. A variety of nice blitzes, disguising personnel and sending corners Sojourn Shelton and Darius Hillary kept the Tigers tamed for most of the game.

Holding Fournette. It wasn't the debut everyone wanted out of the former five-star recruit. Fournette fumbled a pitch in the third quarter and, overall, didn't make an impact. Caputo even took him head on when LSU drove into the Wisconsin red zone. Kudos to Wisconsin for also stuffing him in the kickoff return game.

Injuries to Herring and Zagzebski. Though Andersen said he wouldn't use it as a crutch, the loss of the two seniors in this game was critical. The depth at defensive line was already in question with its youth. If the two injuries don't occur, it's a different game and Wisconsin has more veteran presence late. Personnel-wise, it would have taken some pressure off of young players like Chikwe Obasih and James, both of whom weigh 268 and 259 pounds, respectively, in playing the nickel defense late against LSU's 11 personnel. Herring's injury might have been more key, as he was in at defensive end after Zagzebski's injury more, with Arthur Goldberg working at the nose guard and playing 50 plays, when he was only slated for 25. Our own Neal Olson had the following rushing numbers after the Herring injury:

Second-half drives by LSU. As noted above, the Badgers got off the field early and often, and had chances to rest against a stout offensive line that enjoyed pummeling opponents. Starting in the second half, however, that changed. LSU had consecutive scoring drives of nine, nine and eight plays (14 points total), which wore down the Badgers' defense, nearly having to stay on the field for almost 12 minutes. Couple that with the Wisconsin offense sputtering with two straight three-and-outs and a quick interception thrown by junior quarterback Tanner McEvoy, the defense was gassed when it took LSU only three plays to drive for the go-ahead score in the fourth quarter.

Big plays given up in the secondary. Dural's a game-changer and a huge talent, so defending him was going to be a tall task to begin with for Wisconsin's secondary. With the Badgers up 10 early, sophomore quarterback Anthony Jennings scrambled to his right, then found Dural for an 80-yard touchdown after broken coverage by sophomore cornerback Sojourn Shelton and true freshman safety Lubern Figaro. Figaro broke toward the ball instead of staying back, leading to no one playing behind him. It appeared he had the same tendency with a similar angle on a later deep pass that was incomplete in the second quarter. Dural also beat junior cornerback Darius Hillary on a 44-yard catch in the third quarter, setting up LSU's first points of the second half. Couple that with redshirt freshman wide receiver John Diarse's 36-yard touchdown catch and the two-point conversion thereafter, and it wasn't the best outing for the secondary. "I would say in the back end we were very, very average, because we let big plays affect the game in a very negative way," Andersen said.

Missed opportunities and tackles on the first drive of the fourth quarter. Jake Keefer sacked Jennings, setting up a 2nd-and-14 from the LSU 48, but the defense game up a 27-yard completion to Dural the immediate play afterwards. The very next play, a fumbled pitch to Fournette gave the Badgers a chance to hold the Tigers to a field goal at the worst, but five missed tackles by the Wisconsin defense allowed Diarse to score from 36 yards out on 3rd-and-21. The momentum swung even more in the Tigers' favor after this score.

Fourth quarter: The go-ahead score. LSU drove ahead using its three-wide receiver look, forcing Wisconsin to go to a nickel look (2-4-5 scheme) on that go-ahead drive. Along with the 22 and 21 personnel, a lot of the 11 personnel was implemented in the second half, which stretched Wisconsin (the last two LSU touchdowns came from this personnel). The Tigers used a read-option look out of the shotgun for all three plays on that drive. 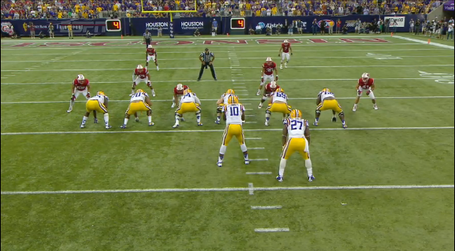 On the touchdown itself, Hilliard ran behind right guard Hoko Fanaika after Landisch went to the outside looking at Jennings. This left open a huge hole for Hilliard, who ran for 110 yards in the game and 93 in the fourth quarter. 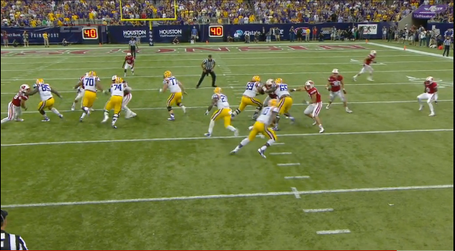 "We have a lot to learn. We'll study that tape. We'll study it hard. Put it in the back of our mind. But as I always say you're never going to forget it because we have to learn from that game. There's a recipe for success to get into these games against those big time opponents and find a way to win. And we have to be able to tweak our recipe to get to that point. And that goes years back. And we've got to find a way to get over that hump. And it's coaches, players, everybody involved."