Despite going undrafted, Jacob Pedersen still holds the promise of becoming one of the most versatile NFL tight ends in Wisconsin history.

Former Wisconsin Badgers tight end Jacob Pedersen hasn't had much time to explore and take in the fine restaurants of Atlanta yet. Though he hasn't had time to take in many sights of the city, he didn't have to travel far to get some great cooking.

Pedersen experienced the Atlanta Falcons' second annual Grill with the Falcons tailgate event at the Mall of Georgia on June 14. Eighteen teams consisting of diehard Falcons fans grilled their hearts away, competing for such awards as Best Ribs Dish, Best Burger and Most Outstanding Overall Tailgate, while some players themselves took part in the event.

"If you want some good food in Atlanta," Pedersen said, "just come to an Atlanta Falcons football game and head to the tailgating section, and you'll find some good stuff."

It's one of many new experiences for the 6'5, 240-pound tight end. Since the day after the NFL Draft, the Atlanta Falcons rookie has been very busy adjusting to NFL life.

Mike Bruesewitz spent his first full professional basketball season in Israel. Now, the beloved Badgers standout hopes to reach out to young athletes with his first run of basketball camps.

The whirlwind of events began immediately after the draft in early May. After signing with the Falcons, the Menominee, Michigan, native had to drive back down to Madison to fly down to Atlanta. From there, he participated in rookie camps, organized team activities and the mandatory minicamp that finally wrapped on June 19.

For Pedersen, it's been a hectic transition. He's treated the OTAs and minicamps like college spring ball, adjusting to a new offensive system lead by Pro Bowl quarterback Matt Ryan and the dynamic duo of wide receivers Julio Jones and Roddy White.

Tasked with learning a new offense that ranked seventh in passing yards under offensive coordinator Dirk Koetter last season, Pedersen to this point been used in similar fashion to his Wisconsin days, playing in both the standard "Y" and hybrid "F" tight end positions, willing to line up wherever Koetter and head coach Mike Smith see fit.

Pedersen, who's traded in his trademark No. 48 Badgers jersey for No. 81 with the Falcons, also had to adapt to geographical changes, moving 850 miles southeast from Madison to Georgia.

"I've been in the Midwest basically my whole life, so going down south to 'Hotlanta' was probably the biggest change," Pedersen said

All were former teammates with Pedersen during his five years in Madison. It's made it easier enter a new setting, though he said his Falcons teammates have been supportive as well.

For OTAs and minicamp, he roomed with Wozniak, a recognizable face who he was also roommates with in his years in Madison. 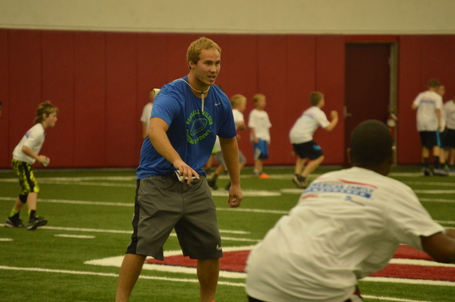 "That kind of made it even a little bit easier transition just having the same guy I've had for the last five years be there through most of it," Pedersen said.

Pedersen, Wisconsin's all-time touchdown receptions leader for a tight end, didn't necessarily have events go as he wanted during draft weekend. Projected by many to be a mid-to-late round pick, he ultimately went undrafted.

Now, he looks at his climb towards securing an NFL roster spot the same way he dealt with his critics out of high school, where he was written off by many people heading into Wisconsin after being offered only one week before National Signing Day.

"Fortunately, Atlanta, I was one of their priorities as a free agent, so I ended up signing with them," Pedersen said.

"I knew the coaching staff from the Senior Bowl, and I'm going to do everything I can to prove to them that they made a good decision, and I can help their team win."

Many people have taken notice of Pedersen's versatility and performance so far. The Atlanta Journal Constitution ranked him as one of the five undrafted free agents to watch during training camp, and it appears Falcons fans are growing fond of him.

He heads back to Atlanta July 22, but for now, he's kept busy in the state of Wisconsin. Last Saturday, he was a guest coach at the Russell Wilson Passing Academy at the McClain Center in Madison. Later that night, he took in the Luke Bryan concert at the Marcus Amphitheater in Milwaukee during Summerfest with fellow former Badgers standout Jared Abbrederis.

On Monday, he joined many of his former teammates, playing at University Ridge in the annual Legends of Wisconsin Classic golf outing.

In less than three weeks, Pedersen will be competing for an NFL roster spot. With his experiences as a Badger behind him but not forgotten, the former Wisconsin tight end is ready for the long grind ahead.

"I know it's going to be a lot of work, obviously, but I think Wisconsin prepared me really well for what an NFL training camp will be like."