Wisconsin didn't place anyone in the 2014 NBA Draft, though it did fare well against several of the players picked Thursday night.

Share All sharing options for: 2014 NBA Draft: How picks fared against Wisconsin in 2013-14

Though zero Wisconsin Badgers were selected in the 2014 NBA Draft, there's still a UW-related angle to be found. The Badgers faced a total of 12 eventual draft picks last season -- seven from the first round and five from the second -- and fared decently against these talented young players.

Note: Recognizing the talent that got these players to the NBA, past stats will not be included in this breakdown. The lone exception in which stats will be derived from the 2012-13 season is for Mitch McGary, who missed both contests due to back surgery in November. The remainder of the stats presented are from the 2013-14 regular season.

Badgers in the NBA

The former Wisconsin sharpshooter won't have to travel far to audition for a NBA job.

Badgers in the NBA

The ultra-athletic forward didn't show off his offensive ability very well in the Elite Eight, shooting 27 percent from the field. To put it frankly, he shot a lot of bricks. Gordon made a three-pointer in overtime to tie the game at 57 but missed his last nine threes prior to that. Granted, the outside game isn't Gordon's forte; he excels when he can flaunt his athleticism. He had 18 rebounds, for goodness sake, and was explosive around the rim against Frank Kaminsky, Nigel Hayes and others. He's an athletic freak, comparable to Blake Griffin. But the Badgers did enough in the end with a 64-63 victory, and the rest is history ... since 2000.

The Dallas native chipped away against the Badgers when Kentucky and Wisconsin faced off in the Final Four. He shot when he was open within the offense, and he didn't try and get fancy by extending his range. In all, Randle shot an outstanding 60 percent for 16 points and muscled inside for five rebounds.

The freshman star had his way against Wisconsin during the team's two conference meetings. The Hoosiers snapped the Badgers' 16-0 start the first time around, 75-72, but Ryan's squad found revenge with a 69-58 victory in Madison. The one thing that stood out to me from Vonleh was his range and the success he had with it. He shot 60 percent from the field; not to mention, he was unstoppable from beyond the arc, shooting 80 percent.

Payne was an absolute monster during Michigan State and Wisconsin's regular-season and conference tournament matchups. He extended the floor tremendously, shooting 62 percent, and was aggressive in attacking the rim early and often. Payne also showed the ability to bring his game on the block en route to averaging 21 points per game, an extremely advantageous quality for the NBA. However, he averaged four turnovers per contest.

The lefty swingman had his way with the Badgers' perimeter players, leading the Wildcats in points (17) when the teams faced off at The Jerry Dome. Young also tacked on three rebounds and three assists. As a left-handed shooter myself, I really liked his game and the way he spaced the floor. 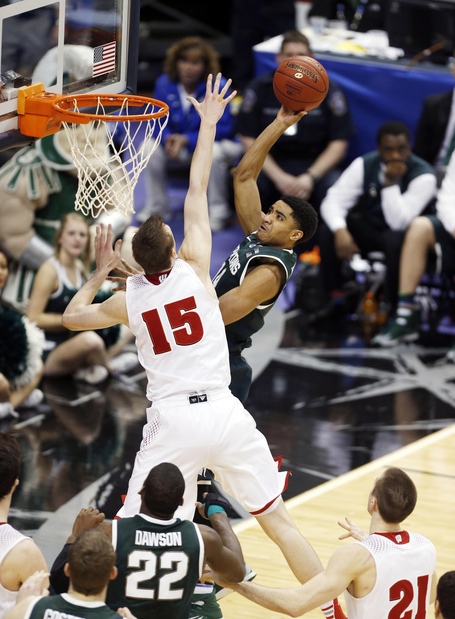 While some are deeming Harris the steal of the draft (he legitimately might be), the athletic small forward didn't fare too well against Wisconsin. He was downright awful in his team's 60-58 loss in Madison, only converting on three of his 20 shots. You could make the argument it was because of Josh Gasser's defense, but let's not get ahead of our ourselves. Harris rounded out with 12 points in the second matchup and averaged seven rebounds per contest.

During the 2012-13 season, McGary added 12 points on 6-of-10 shooting when Ben Brust hit the half-court shot to tie the game in regulation, plus nine points in the Big Ten tournament game. He was also a terror on the boards, recording 15 rebounds. It's still crazy to think Wisconsin swept the 2013 NCAA tournament runner-up.

Harris also shut down by Gasser's stifling defense, shooting 10 percent from the field for a mere two points in a 48-38 loss early in the season.

LITTLE DOG! Robinson was one of the most steady players that the Badgers faced against last season. He wasn't flashy, but shot 65 percent from the field and averaged 12 points per.

The Pac-12 Player of the Year put forth a fairly noticeable stat line in the Elite Eight. Facing an array of defenders, Johnson tacked on 16 points with four rebounds and four assists. His offensive foul in the winding seconds of overtime, however, proved to be costly.

Besides Harris', Brown's performance against Wisconsin was the worst among the future draft picks. He fell into early foul trouble and was taken completely out of the rhythm of the game. He only scored two points on 1-of-5 shooting, and added one rebound despite standing 7'1. To add salt to the wound, the Minnesota native had five turnovers in a 69-66 loss.

Last, but not least, is the player who had some of the best games of his season when he faced the Badgers. In Wisconsin's 75-73 victory in January, Marble was on fire, scoring 27 points from just about everywhere on the court. He showed off his full game in the second matchup, adding 21 points, four rebounds, 11 assists and three steals. I can imagine the Badgers are looking forward to not facing him twice a year.