Impressed by the sights and sounds of Wisconsin's campus, the Texas linebacker gave his verbal pledge to the Badgers earlier in June.

Two weekends ago, Wisconsin head coach Gary Andersen and his staff saw four recruits give their verbal commitments to the Badgers. It was one of the most highly anticipated high school camp weekends in some time, and the results didn't disappoint.

Desoto, Texas, junior linebacker Chris Orr joined the 2015 class as Wisconsin's 10th commit that Saturday. The future Badger, who comes from a football-rich family, bonded with the coaching staff immediately and enjoyed the university campus and what the city had to offer.

In fact, it didn't take long in Orr's trip for him to realize he wanted to be a Badger.

"It'd probably be around kind of halfway through the day when I saw how much I meshed with the coaching staff and the players from the team that I met," Orr said.

"I knew I had kind of a good, established relationship with [safeties coach Bill] Busch and [defensive coordinator Dave] Aranda, but I didn't know I was going to mesh that good with the rest of the coaching staff and the rest of the players that I actually met."

Kyle Penniston ready to be a Badger

You've seen his tweets as the unofficial social media ambassador for Wisconsin. Now Kyle Penniston is in Madison this weekend, excited for the beginning of his collegiate career in January.

Your destination for Wisconsin football recruiting news, analysis and discussion.

Kyle Penniston ready to be a Badger B5Q Recruiting

Orr spoke primarily with Busch and Aranda during the recruiting process. Wisconsin ultimately offered Orr, a three-star prospect by 247Sports and a two-star recruit by Scout.com, on Memorial Day. He traveled up to Madison and arrived June 13.

The 6'0, 190-pound linebacker noted how the family-oriented atmosphere from the coaching staff and faculty was one of the things that stood out to him the most upon his arrival to Madison. Upon touring the campus area, a few other key spots sparked his interest.

"The next key thing that actually stood out was the view actually from [Memorial] Union -- I liked staying on the lake -- the new academic facilities, and the stadium," Orr said.

He and his parents also had the opportunity to travel off campus and take in one of the city's well-known establishments, The Old Fashioned.

"That was an eye-opener," Orr said.  "I didn't know Wisconsin had good eating spots like that."

On the field, Orr said Busch and Aranda see him playing the "rover" linebacker position in the Badgers' 3-4 base scheme. He likened the position to a 4-3 weak-side "Will" linebacker but in a 3-4 package, looking to plug the run and attack the line of scrimmage as a "run-and-tackle, run-and-attack guy."

He models his play after his older brother, Zach, who recently signed with the Baltimore Ravens after playing at North Texas, along with Atlanta Falcons linebacker Sean Weatherspoon and a name many Wisconsin fans know and adore: Chris Borland.

"An admirer of former UW linebacker Chris Borland, Orr does a good job of shedding blockers in order to make tackles and moves well from sideline to sideline, showing more burst than his 4.6 40-yard dash time would indicate," Worgull said. 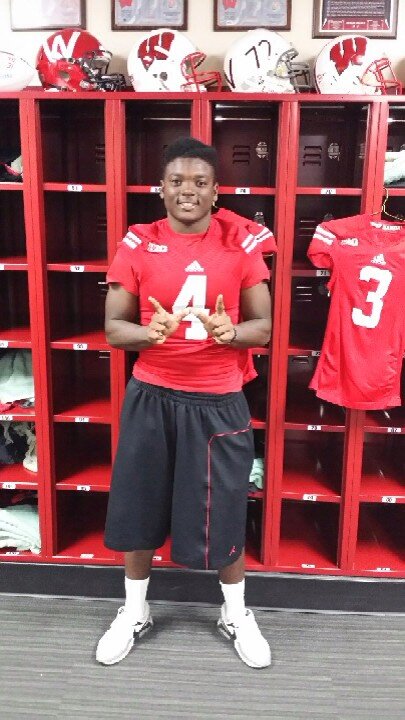 "He's still a raw athlete but has a lot of good characteristics that will fit in real well with UW's 3-4 defensive scheme, likely as an outside linebacker to start out."

Orr describes his style of play as "physical and smart," as he believes his lateral quickness and instincts are assets to his game. The one area he would like to improve upon is in the physicality department, as he hopes to level opponents with a little more impact.

Football runs in Orr family genes. Chris' father, Terry, was an eight-year NFL veteran who played tight end, and his brothers -- Terrance, Zach and Nick -- all have played college football at the very least. As Chris began to think about playing at the next level, he asked for advice from his family at times but largely stayed independent throughout his decision-making process.

"I didn't really look to them for guidance," Orr said.

"I mean, I asked them about, told them the scheme and how they wanted me to fit in it, and they thought that was a good fit. Big Ten is 'Linebacker-U,' basically. It's a linebacker conference.

"It's a place that I can take my skills to the next level."