The Badgers picked up their second commitment of the weekend on Sunday in the form of Barnegat, New Jersey, offensive tackle Sam Madden.

As expected, Wisconsin picked up a commitment from Barnegat, New Jersey, offensive tackle Sam Madden on Sunday. 247 Sports was first with the scoop, and Madden quickly confirmed the news on his Twitter account (which is private). 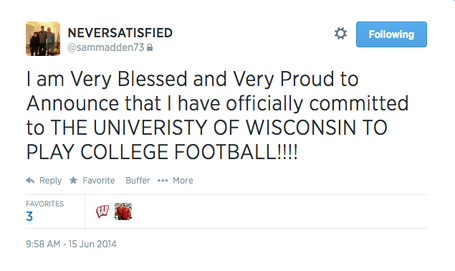 Madden is a four-star offensive tackle who will come to Madison with the size to play quickly -- 6'7, 345 pounds -- as the 11th commitment to the Badgers' 2015 class. He's rated the No. 37 offensive tackle in the country according to 247Composite, as well as the No. 7 player from New Jersey. Wisconsin's 2015 class also now ranks 24th in the country and fourth in the Big Ten in those composite rankings.

Madden is a gigantic road grader, perfect for any team that runs a downhill gap scheme. He swallows up most opponents, and consistently wins battles in a phone booth. He controls defenders with his long arms and lower body strength, and reacts well to movement for such a large athlete.

Madden was also offered by such schools as Iowa, Louisville, Miami, Nebraska, South Carolina, Virginia Tech, and West Virginia. After his commitment, expect the Badgers to throw most of their recruiting efforts on the offensive line toward San Marcos, California, tackle Kevin Estes.

First-year running backs coach Thomas Brown is credited with Madden's commitment, with an assist from offensive line coach T.J. Woods. Madden is the third offensive tackle in Wisconsin's 2015 class, joining Jon Dietzen and David Moorman. Madden is also the second commitment of the weekend for the Badgers, as DeSoto, Texas, linebacker Chris Orr announced his decision on Saturday.

Aside from his apparent natural fit as a traditional Wisconsin lineman -- again, he's already 6'7, 345 pounds -- Madden seems likely to endear himself to Badgers fans.

Sam Madden told me he put together a spreadsheet charting each team's track record with OL, including combine/draft. Wisconsin stood out.

Sam Madden told me he'd love to play with Barnegat HS (NJ) teammate Manny Bowen at next level. Wisconsin is one of linebacker's 30+ offers.

And one more feel-good indicator about this recruiting class:

Just got to Camp Randall. Group of Penniston, Moorman, Dietzen, Kafentzis and Pfaff all welcoming Sam Madden to to the Badgers family.