Wisconsin depth chart 2014: A post-spring look at the Badgers' defense

Last week, we looked at Wisconsin's possible post-spring offensive depth chart. This week, as the defense loses nine key contributors, we look at who's shown flashes and possibly earned some reps heading into fall camp.

Share All sharing options for: Wisconsin depth chart 2014: A post-spring look at the Badgers' defense

It's been three weeks now since Wisconsin spring football concluded. Though fans are looking for answers from a month's worth of practices, the real answers won't come until the Badgers put on the pads against LSU on Aug. 30. With an abundance of injuries at multiple positions (disclaimer), the spring provided some much-needed reps for younger players.

So, where could certain players stand at their respective defensive positions (and make this the faster defense many are dreaming of)? B5Q's Luke Mueller and myself give our thoughts below.

Note: Luke created the depth charts below as he witnessed many more practices than I did over the course of the spring. You'll see our discussion and breakdowns thereafter. 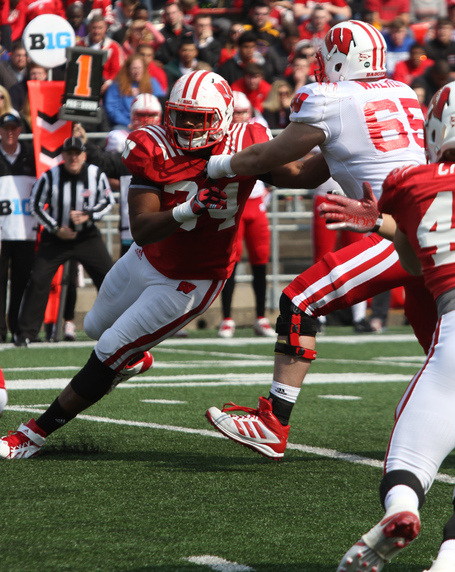 Jake Kocorowski (JK): The front seven is hit hardest by graduations/expirations of eligibility, as four defensive linemen and four linebackers -- all substantial contributors to last's year solid defense -- have moved on from the program. At defensive end, the experienced group of Pat Muldoon, Tyler Dippel and Ethan Hemer held down gap assignments to allow guys like Chris Borland and Ethan Armstrong to make plays as linebackers. This year's crop of players returns a senior in Zagzebski, who took on a leadership role after a bad day of spring practice. That, and you saw the emergence of Obasih, whom players like Beau Allen have commended. What did you see out of Obasih and other young players like James, who moved from outside linebacker to a hybrid defensive end/linebacker role?

Hey, did you hear the Badgers are recruiting in Texas? Plus, Offer List Lightning Round and a couple of sleepers.

Luke Mueller (LM): Obasih is an extremely hard worker and a very cerebral player. After talking with him, I could tell he is his own toughest critic. He still is a bit raw, but he has undeniable talent. He has athletic ability that I haven't seen from a Wisconsin defensive end since Erasmus James, but he has a long way to go before he can even be mentioned in the same sentence.

Alec James, on the other hand, has shown great speed and overall talent. He is quick to the ball and seems to have a high football IQ. I look for he and Obasih to give opposing offensive lines headaches this year because of their speed and athleticism. One thing fans must wait for with James is for his body to evolve into what coaches expect at his new positions.

JK: Herring and Zagzebski are the two experienced players, both seniors, on this defensive line. They're also the linemen that have received some significant playing time when it counted. Herring could possibly line up as the nose guard and also in a three-technique as a defensive end. One has to think head coach Gary Andersen and defensive coordinator Dave Aranda would need to be comfortable with players like Gilbert and Goldberg to allow Herring to be used in this fashion, though. What did you see out of the nose guards in the spring?

LM: Herring is head and shoulders above both Gilbert and Goldberg, but with that being said there is still talent at the position. Andersen's also mentioned incoming freshman Jeremy Patterson. If he's able to step in and make an impact immediately, Andersen and Aranda will have the flexibility to move Herring around. I really only saw Herring play end when the Badgers were in a 3-3-5 set. Gilbert and Goldberg have a bit more size and will eat up more space in goal-line settings. Herring will undoubtedly be the heart and leader of this defense along with Zagzebski and Mike Caputo. 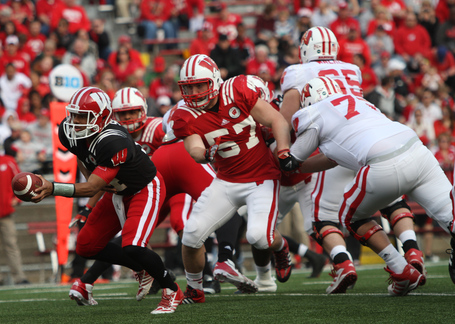 JK: You saw a lot of movable parts from both the inside and outside linebacker positions this spring, as Schobert initially moved inside then back outside, Leon Jacobs went inside and Caputo initially switched to the F-side outside linebacker position before bouncing back to safety. Following last season, I thought Schobert and Biegel would be the the starting 'backers with the losses of Armstrong and Brendan Kelly, and judging by your depth chart, Luke, it appears you agree in my assessment. Who in this group impressed in the spring?

LM: Schobert showed great versatility after being involved in the shuffle you mentioned. He is a guy that always seems to be in the right place and the right time. He rarely misses an assignment, and should be great in run defense. Personally, I thought he was the most impressive this spring at outside linebacker.

JK: Gone is Borland, quite possibly the most dynamic linebacker Wisconsin has ever had, along with blitz specialist Conor O'Neill, who was utilized nicely in those 1-4-6 packages with a defensive lineman (normally Dippel) standing up. Landisch started three games last season and played extensively last season as the "rover" linebacker. I firmly believe Marcus Trotter, the "mac" linebacker, will be a solid replacement of Borland, as seen when he led the team in tackles at Illinois and Iowa with Borland injured last season. His brother, Michael, also moved to the "rover" position from safety this spring, and Jacobs switched from outside to inside linebacker. There will naturally be a bit of a drop-off after losing Borland's versatility, but I'm not concerned given the experience Landisch and Marcus Trotter have. What do you expect to see out of this group heading into fall camp?

LM: I think the inside linebackers are going to hold this defense together. With all the losses on defense, it is encouraging to see Landisch and Trotter have stepped up in real game situations. Landisch is another guy who just seems to be where he is supposed to be. I don't recall him ever missing a tackle all spring. He is a great open-field tackler. Trotter, on the other hand, filled in very nicely in the absence of Borland. I don't believe these performances were a fluke. Both Marcus and his brother Michael are very smart kids who understand the defense up and down. They will be invaluable this summer during teaching moments for younger players. Michael has done a good job bouncing between positions and looks comfortable at the "rover" position. Finally, Jacobs is an athletic freak that I know many fans are excited about. Give him time. This year should be good for him to occasionally see the field and serve as a learning experience. His athleticism is all its cracked up to be. Look for him to be a future star on Wisconsin's defense. 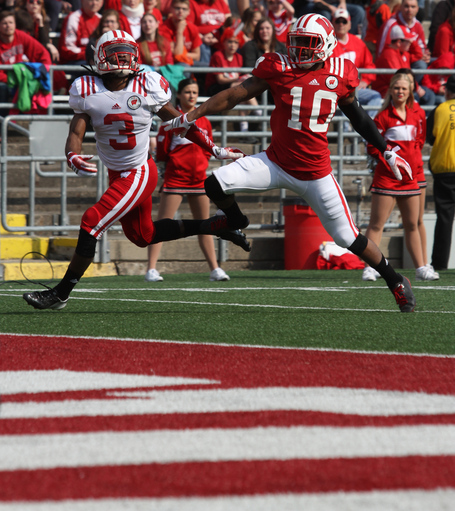 JK: For a change, the cornerbacks are one group I feel comfortable with entering the second year under Aranda and also Ben Strickland as the cornerbacks coach. Shelton, Hillary and Caputo at safety are three of the four returning starters. The feel-good story of camp revolved around Gaulden, who after a couple seasons of injuries stepped into the nickel back position nicely. What did you notice out of this group in the spring?

LM: You couldn't help but notice the overall calm the secondary has. I would expect Shelton to make far fewer mistakes than he did last year, although he is still the same physical player he was last year. Hillary and Shelton will be one of the best combinations come this fall. Hillary is an undervalued cornerback who does not get enough credit for the impact he has on defense.

Like you said, you also couldn't help but notice Gaulden's return. He looks like he hasn't lost a step since his injuries. He's great in coverage and will be a pesky nickel back for any slot receiver. He may be the most fundamentally sound corner of the group, which I believe is due to his work off the field and in the film room during his time away.

JK: Caputo moved to outside linebacker, then came back to be the starting safety with his nose for the football toward the line of scrimmage. But there's an intriguing battle for the other safety position between Jean (who as of today is still listed as a cornerback on Wisconsin's official roster) and Musso. Throw in Hudson with Hammon -- who has game-time experience with the various subpackages Aranda deployed in 2013 -- and a returning Ferguson, who's coming back from injuries last season after contributing on special teams and getting snaps in garbage time, and you have yourself an interesting competition heading into fall camp. Note there's still incoming freshman Lubern Figaro as well as A.J. Jordan, who looked sharp in early spring (granted, a small sample size) but had to play both sides of the ball due to the injuries at wide receiver. Who has the edge heading into preseason camp?

LM: Caputo will no doubt be a starter. As you mentioned, the rest is really up for grabs. I think that Jean has a leg up on everyone as it stands today because of his speed and athleticism. Hudson is still raw, but he helped his cause by enrolling early. I would look for Hammon to play a safety/linebacker role in some defensive sets that Aranda concocts because of his size. Jordan is the wild card of the bunch. He has the most size, speed and athleticism of the group, and has proven to be versatile with all of his previous position-switching. Andersen would not commit to saying which position Jordan would play come fall camp, but when Jordan was at safety he looked very comfortable.