New this year: a free t-shirt is up for grabs! Sign up here: http://y.ahoo.it/HWspkJ3L

Yes, we have a 2014 bracket pool! We'd love to get as many B5Q community members signed up, so we're putting a real special prize up for grabs: One of two t-shirt designs from our Gameday Depot site store! 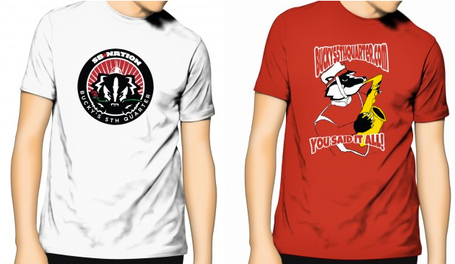 Official Rules for the 2014 Bucky's 5th Quarter NCAA College Basketball Brackets Contest
No Purchase Necessary. A Purchase Will Not Increase Your Chances of Winning.

1. Eligibility: The 2014 Bucky's 5th Quarter NCAA College Basketball Brackets Contest (the "Contest") is open only to legal residents of the United States (excluding territories and possessions) and Canada (excluding Quebec) who, at the time of entry, are at least eighteen (18) years of age and are registered members of www.buckys5thquarter.com (the "Contest Site"). Employees, independent contractors, interns, officers, directors, and agents Sponsor, other companies associated with the Contest, as well as the immediate family (spouse, parents, siblings, and children, and their respective spouses) and household members of any of the foregoing, are not eligible to enter.
2. Sponsor: The Contest is sponsored by Vox Media, Inc., 1201 Connecticut Avenue NW, 11th Floor, Washington, DC 20036 ("Sponsor").
3. Agreement to Official Rules: By entering the Contest, you indicate your full and unconditional agreement to, and acceptance of, (a) these Official Rules and (b) Sponsor's decisions, which are final and binding. Winning a prize is contingent upon fulfilling all requirements set forth herein.
4. Entry Period: The Contest begins at e.g. 12:01 pm ET on e.g., March 18, 2014 and ends prior to the scheduled tip-off time of the first game in the second round of the tournament (currently scheduled for Month, Date, Year) after which all selections must be finalized and may not be revised (the "Entry Period"). Entries submitted before or after the Entry Period will not be eligible. Sponsor's computer is the official time-keeping device for the Contest.
5. How to Enter: To enter the Contest, you must (i) be a registered member of the Contest Site, (ii) be a registered member of the Yahoo Sports Tourney Pick'Em (the "Tournament Site"), (iii) be a registered member of the league entitled "Bucky's 5th Quarter 2014" (the "League"), and (iv) create and submit an entry for the League on the Tournament Site.

iii. Becoming a Member of the League. Locate the League in the Tournament Site's Group Directory and click to join.

iv. Creating and Submitting an Entry. Once signed up to participate in the League on the Tournament Site, an entrant must submit his or her "selections" in accordance with the rules of the Tournament Site to predict the outcome of all games in the 2014 Men's NCAA Basketball Tournament (an "Entry"). There is a limit of one (1) entry per person/e-mail address. Entries will not be acknowledged. The use of an agency or any automated system to enter is strictly prohibited and Sponsor reserves the right to disqualify any entries received through such methods, as determined by Sponsor, in its sole discretion.