How did Heisman Trophy winner Ron Dayne run wild on Stanford in the 2000 Rose Bowl? We asked Bill Ferrario, the former Wisconsin and Green Bay Packers guard, all the details within the play that sparked Wisconsin's second-half comeback.

Welcome to the first entry into a new series at Bucky's 5th Quarter called "Xs & Ooooooooos," affectionately named after one of the student section's favorite pastimes. No, not that one chant you hear through your TVs each week.

Each episode of the series will dive into a particular play in Badgers' lore, either recent or past history, and break down the play itself. What personnel/formation was called, the assignments of key players and of course, the result. We also hope to include a bit of context, such as the lead-up to the play during the game, what players/coaches were seeing, among other nuggets of knowledge, hopefully with the help of a special guest who was on the field at that time of the game.

As the all-time leading rusher in FBS history is set to be honored Saturday with an NFF Hall of Fame On-Campus Salute, we felt compelled to begin this series with a look at one of the many impressive runs by Heisman Trophy winner Ron Dayne.

We look at the 2000 Rose Bowl game, at that time not presented by Vizio. Barry Alvarez's Wisconsin Badgers, ranked No. 7 in the BCS, took on the Stanford Cardinal. The Badgers won their third Rose Bowl of the Alvarez regime, 17-9, but it took a second-half spark led by Dayne and his offensive line to overcome a 9-3 halftime deficit and score 14 unanswered points to defeat the Pac-10 champions.

One play in particular, a 64-yard run by Dayne on the second play in the second half, ignited the Wisconsin offense. We courted one of the five starting offensive linemen from that 1999-2000 team, former Badgers guard Bill Ferrario, to help us break down the play. Video of the run was surprisingly hard to find, but through Ferrario's retelling and the diagrams below, we can still relive one of the most pivotal plays in Wisconsin history.

The lead-up to the play

Wisconsin went into the locker room at halftime down 9-3. The underdog Cardinal defense only allowed a field goal, and the Badgers didn't gain a first down in the first quarter. The Cardinal defense stacked the line of scrimmage, moving eight or nine guys in the box to plug all the holes hoping to be opened, suffocating their running game.

Ferrario remembers an animated Alvarez getting on his players to shape up for the second half, though he was still recovering from knee replacement surgery less than two months before the game.

"He had a cane for the Stanford game, and that was not holding him back one bit," Ferrario said.

"I don't know if Wisconsin just was traditionally, got off to slow starts in bowl games, but I think coach Alvarez did a little bit of yelling, he got his point across, and made us realize what we needed to do and what we went out there to California to do."

The Badgers started 1st-and-10 from their own 20-yard line to start the half, and gained five yards on a Dayne run.

The play itself: 2nd-and-5 from the Wisconsin 25

Wisconsin offensive coordinator Brian White called another run. Ferrario remembers his lineman assignment known as "25 Zone." The initial formation had two wide receivers lined up left ("twins") in an offset I-formation. Fullback Chad Kuhns (No. 41) lined up near the strong side by tight end John Sigmund (No. 85). Note the eight defenders in the box and close to the line of scrimmage. Strong safety Tim Smith (No. 10) lined up next to linebacker Marc Stockbauer (No. 90). 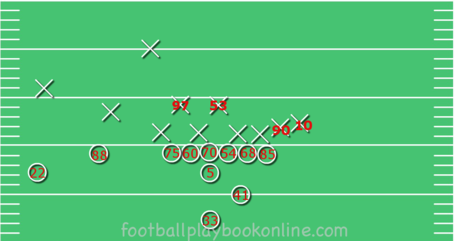 Quarterback Brooks Bollinger (No. 5) set Kuhns in motion from the tight end side back towards wide receivers Nick Davis (No. 22) and Chris Chambers (No. 88) on the back side. This motion forced the defense to make a major adjustment as linebackers Riall Johnson (No. 97), Sharcus Steen (No. 53) and Stockbauer moved to their right, a purpose motion should accomplishment, per Ferrario. Seven defenders are to the left of center Casey Rabach (No. 70), while Smith also backs off five yards from the line. The cornerback covering Chambers, Frank Primus, cheated in to the left. 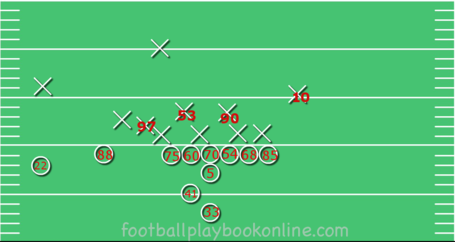 As Kuhns got parallel with left guard Ferrario (No. 60), Bollinger took the snap and proceeded to hand the ball off to Dayne. The linemen assignment was "25 Zone," an inside zone run that was supposed to go to the left over the outside hip of the left guard, which in this case, was Ferrario himself.

"The front we had on the left side of the line, we had a nose guard and I believe a wide five technique (defensive end lineman lined up to the outside shoulder of the left tackle), so it's pretty much two double teams on the front side of that play, up to linebacker level," Ferrario said. The combination of Ferrario and Rabach double-teamed the defensive tackle in between them, with left tackle Chris McIntosh (No. 75) and Kuhns taking on the end. On the right side, guard Dave Costa (No. 54) and tackle Mark Tauscher (No. 68) doubled up on their assignment of the other defensive tackle. 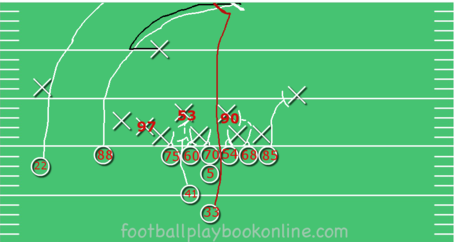 This double-teaming served a big purpose.

"The key to any type of zone play is getting movement on the down guys (defensive linemen), pushing them back to linebacker level and making those linebackers make a decision," Ferrario said.

That movement to that second level, and the linebacker's decision on where to position himself into what gaps, allows one of the linemen to come off the double-team and block him. Ferrario and Rabach pushed their defender two yards forward, making the linebacker Steen go towards the right side "B" gap. Ferrario himself pulled off of the nose guard and latched on to Steen. Likewise on the back side, where Costa and Tauscher move forward, Stockbauer looked like he abandoned the "A" gap he was lined up over and headed toward the left side "B" gap. Sigmund blocks out Smith.

"If you could get him a yard of movement, it's almost guaranteed he's going to get you five yards." -Bill Ferrario on Ron Dayne

Although the play was designed to go off of the left side, Dayne took the ball and ran between Rabach and Costa to the right, the result of the double-teams creating multiple holes for the back to read and react to.

"You're making three-to-four holes you're creating on that offensive line," Ferrario said. "Obviously, the hole's designed to go one way, but there's always cutback lanes, and Ron has the ability to choose which hole he's going to go through."

Tauscher got just enough of Stockbauer as Dayne ran through the two hole and broke his tackle at the 30. Two key blocks downfield by receivers Chambers and Davis allowed him to sprint downfield until Primus finally horse collared him down at the 11.

"What really made that play successful, that made a lot of Ron's big runs successful, were our receivers at Wisconsin," Ferrario said.

"Not only were they really good receivers for being at a school that didn't throw the ball a lot, they were phenomenal downfield blockers."

Two plays later, Dayne got a key block by Kuhns and scored the go-ahead touchdown to put the Badgers ahead, 10-9. Dayne accumulated 200 yards on 34 carries and won the Rose Bowl MVP for the second year in the row to cap off his final game as a Badger.

"Ron was one of the best backs ever to block for," Ferrario said.

Out of the 11 players on the field for Wisconsin during that play, at least nine went on to play in the NFL.

Special thanks again to Bill Ferrario for spending some time with B5Q to break down this historic play. Follow him on Twitter @Bill_Ferrario, and check out PackerEvents.net to book your favorite past Packers (and, coming soon, Badgers) for a business event.