A Swedish studio made what may be the only badger-centric video game known to man, and we played it. It's awesome.

Share All sharing options for: 'Shelter:' B5Q reviews a PC game about badgers

Some of you may remember that Mike featured a badger-themed PC game on the site a while back. The trailer followed a pack of badgers, traipsing through the woods, foraging for grubs, hunting foxes and running from hawks.

The game is called Shelter, and I've been following along with production for the last several months through the game's Facebook page. A couple weeks ago, I contacted the developers, Might and Delight, to see if I could get an advanced copy so I could write about it for B5Q. They obliged, graciously, and that's why you're reading this now.

First, a quick confession. Before I started playing, I figured this space would contain the usual glut of B1G in-jokes, probably comparing teams to woodland creatures (Purdue would have been a tree, behind a bush, behind a mountain), but I was too absorbed in the game -- my ears tuned to twigs snapping, my eyes mining the dark for anything edible, my heart thumping fast as I outran flames licking at my feet -- that I forgot that I was supposed to be snarky about everything.

There is a bit at the end about what an indie PC game made by a bunch of Swedes might say about this year's Wisconsin football team. Before that, I'm going to talk about the game itself. If you want to skip ahead, just know this: Shelter is an engrossing, beautiful, emotional trip.

Shelter opens without any preamble. You immediately take control of a mother badger in a den surrounded by five cubs. Only, one of the cubs isn't feeling so well. Instead of dutifully following you when you walk, like his four cheery siblings, he lays curled up in a colorless lump on the ground.

As you walk ahead, you see a stalk sticking out of the ground. Go up to it, give it a sniff, left click your mouse and your mama badger avatar will pull out a tuber, which you can then give to your cub. The color will rush back to his pelt, and he will hop back to his feet with an excited yelp. A guitar strums somewhere to let you know that you've done well, and you and your posse are ready to step out into the world. 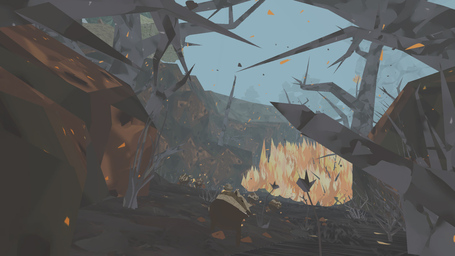 Despite being a European game, these appear to be American badgers. Also, fire.

After a long wind through the den's tunnel entrance, Shelter opens onto a scene that can best be described as the finest shoebox diorama ever crafted. The world looks as if it was preciously molded out of pastel construction paper by a Japanese origami artist. Which isn't to say that world is still. You'll see birds flying, frogs hopping and rodents milling about. You'll hear them, too, as well as the rush of water set to a tranquil acoustic soundtrack. In later levels, rain and debris may be falling and flittering around you, to eerie effect. Shelter is wonderful to look at, which is why it is almost unfortunate that so much time is spent with your nose to ground.

The opening scene of Shelter illustrates the game's core objective: Keep your cubs alive. You need to be on a constant hunt for food, either more root vegetables or something gamier. Frogs and rodents are a good source of nourishment. Foxes are best, but you will have to be cunning to snag one, using the surrounding high grass to creep close enough to pounce. Fail to keep your children fed and the color will slowly fade from their pelts until they can't carry on any further, just like the poor little guy in your den.

I promise that you will have named your cubs by the time you finish Shelter. You will play favorites, and yes, one of them looks like Bucky.

Shelter's master stroke is its ability to make you care, desperately, for the pixel kinder following you through the landscape. At first, nothing seems imperative. There is no goal except to forge ahead wherever the woods may take you, and the miniature creatures lagging behind are a nuisance, if anything. That is, until disaster strikes. Beyond a few peaceful stretches in the opening level, you will never be safe in Shelter, and at some point you're going to screw up. You will leave one of your cubs exposed for too long. He will die, and it will be all your fault.

In addition to starvation, your mother badger is also combatting larger forces of nature. Hawks also have to eat, and they will be stalking from up high while you are trying to escape an inferno or cross a river before onrushing rapids sweep you away. All of these obstacles are conquerable, but not without quick, careful and precise calculation. You will never feel cheated by Shelter, but you will curse it for winnowing away your pack of children after each careless mistake. Your pack will fall from five, to four, to three, to oh god -- until the little creatures that you resented at the outset become all that ever mattered.

I promise that you will have named your cubs by the time you finish Shelter. You will play favorites, and yes, one of them looks like Bucky.

Scored by strings and pianos and thumping percussion that ramps up one tick ahead of your heartbeat every time danger is near, Shelter will run you through every point along the emotional spectrum. The game's tensest moments rival Hitchcock, and when you're not running for your life you'll be alternating between feelings of accomplishment and utter hopelessness. The journey is over quickly -- the game shouldn't last you more than four hours -- but it's a trip worth taking.

Shelter is unique. There is no running score counter, and there is nothing on screen that isn't a part of the world that you inhabit, outside of an occasional unobtrusive prompt to teach you the controls. For those used to games of the pointy-shooty or throwy-catchy variety, the lack of defined goals may be difficult to digest and the short run time may feel a tad underwhelming. If you're in the mood for something off-beat, however, Shelter should itch that spot. The game is made all the better if you have a particular affinity for badgers. A few of you might. 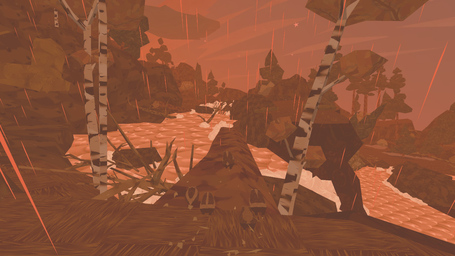 What it means for Wisconsin

Shelter's narrative arc actually has some rather neat parallels with Wisconsin's upcoming football schedule. For example, the introduction level is akin to the opening matchups against UMass and Tennessee Tech. If the game is any indication, Wisconsin should cruise with a bump or two as a natural result of rust. Then the game switches to a nighttime scene, which would be when Wisconsin heads west to play Arizona State.

I could break down the entire schedule this way, but I'm afraid to say more for fear of spoiling things. Here's a season prediction without context. Do with this what you will.

Gary Andersen is the mother badger, obviously, and a five-loss season is a worst-case scenario, one loss for each cub. Lose five children, and that's bad. Lose none, and that's good. I lost three, so:

The team won't be prepared for Arizona State and will lose, but they will bounce back nicely and go on a run that includes a win at Ohio State. They will lose at Iowa (I'm just reading digital tea leave here), and as they're reeling they'll overlook a fired-up BYU squad. Luckily, Indiana and Minnesota don't present much of a challenge. I promise that gophers will be torn to shreds. By this time, Wisconsin will be back on its feet, and will turn in a confident win over Penn State to head to the Big Ten Championship Game for the third year in a row.

And then ... I don't know, man. Everything gets sort of fuzzy from there.

SWEDISH VIDEO GAME DEVELOPERS PREDICT: 9-3 (7-1), and then a lot of funny feelings about death and stuff.

I'll use the wonky grading system that UW used while I was there and give Shelter a solid A/B. The game is well worth your time if you're into odd video games or badgers. If both, then HOO BOY YOU'RE IN LUCK.

How to play the thing

You can't play until the game is released on Wednesday, but you can take advantage right now of a pre-sale on Steam or at the game's official site to get a reduced price.