Wisconsin finished seventh in the nation for men's college basketball attendance, the program tweeted from its official @BadgerMBB account Tuesday. That marks the 2012-13 season as the 13th consecutive top-10 appearance for the Badgers, as well as their 11th years as being among the top two teams in the Big Ten. Kentucky, Syracuse, Louisville, North Carolina, Indiana and Creighton were the only schools ahead of them.

And not to be outdone by the ongoing saga that is Wisconsin football fall camp, the basketball program produced another bit of enticing news Tuesday, along this vein:

One week until the #Badgers leave for Canada. It's almost hoops season!

Badgers to have pair of free web streamed games in Canada | UWBadgers.com

We've known Wisconsin's schedule for its upcoming exhibition trip to Canada for a while now, but Tuesday we learned two of the games will be streamed live online, for free. Those two games include the Aug. 22 contest vs. Ottawa and the Aug. 25 tilt with Ryerson. Both of the host programs will be responsible for the stream, and you can find their sites in the link above.

Yes, that's "'Canes" as in the Miami Hurricanes. No, I have not lost my mind.

Rather, one of those newcomers is former Wisconsin defensive end David Gilbert. We closely followed his departure from Wisconsin, which was supposedly due to lingering foot issues that were forcing him to end his collegiate career early.

I won't deny him the excuse that his injury healed better than expected, but I will say that most Madison people seemed to overlook his apparent desire to play closer to home. Gilbert wasn't made available to the media on Tuesday after the 'Canes had their first full-pads practice of fall camp, which is interesting, but not necessarily surprising. We did, however get to hear from Al Golden*.

"In his mind, he was going to come here or one of the other Florida schools," Miami coach Al Golden said Tuesday. "He wanted to be closer to home. So we got involved, made sure his foot was OK and everything. I guess he missed (football). I guess he wanted to continue to compete. We're very fortunate to have him.

"He's on a mission. He wants to go to graduate school and he wants to play in the NFL. He's guy that can rush the passer, so we're excited to have him."

Roles for many of Miami's defensive linemen remain up in the air, so it remains to be seen if Gilbert will be used well enough to boost his draft stock. We remember the skill he always seemed to entice coaches with, though I'd argue he never really lived up to the hype that presented. Nevertheless, I wish him nothing but the best in Miami. Even if he did kind of wiggle his way out of Wisconsin, I can't fault a guy for wanting to get closer to home.

*That's Al Golden, as in the Al Golden that was supposedly, possibly the one-time favorite for Wisconsin's head coaching job this past offseason.

That's, umm, a lot. That also fits at Wisconsin, where assistant coaches have come and gone through some sort of ridiculous, figurative turnstile over the past three-four years. For DeCicco, who appears likely to contribute among UW's talented quartet of tight ends with Jacob Pedersen, Brian Wozniak and Sam Arneson, the coaches each had enough of an impact to where he supposedly didn't hesitate to recount their names. They are, in chronological order from his recruitment to the present day:

From the "I had to" department: I particularly enjoyed making this Internet discovery last night: 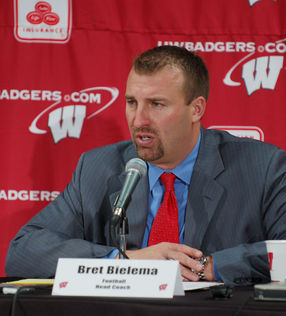