NCAA Football 14 updated its uniform selections this week, and some additional Wisconsin features could indicate new uniform possibilities for this season.

Honestly, I'm hoping this comes to fruition because previous Wisconsin jersey discussions have went like this and this, and those ranged from decidedly "meh" to "DEAR GOD NO." adidas also tweaked the Badgers' football jerseys for the 2012 Rose Bowl by making the red jersey numbers rose-patterned, which was cool but a little too cutesy, if you ask me.

The latest (potential) uniform debate comes from the source of many great uniform debates: EA Sports' NCAA Football. The latest iteration, NCAA Football 14, was released July 9 with the fairly standard, deep roster of uniform choices for all of college football team's. Oregon has about a dozen (no lie), many schools have nearly as many and Wisconsin has its traditionally slim selection of red and white jerseys and pants, plus a few of those recent adidas alternates.

On Tuesday, EA pushed out the first update to NCAA Football 14's uniform selections via a Xbox Live and PlayStation Network. Uniforms for 21 teams were added, totaling 120 different uniform pieces. Wisconsin additions, per EA's release, included "2013 adiZero gloves with "W" logo, Red jersey (red Base layer), White jersey (red base layer), white pants and red pants." A fairly ordinary selection, and much different from what was originally included in the game.

But thanks to underthecode.com, we have a visual of what one potentially new combination could look like, and what that "red base layer" might mean. Naturally, we are talking about a video game here, but we've seen before when NCAA Football 14 teases out upcoming uniform changes. 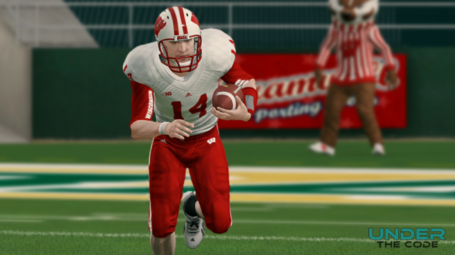 The most glaring changes involved red, in the sleeves and the pants. The sleeves, with "Wisconsin" and the Motion "W' each on one, seem new to me. The red pants, of course, aren't, but they're typically reserved for the Rose Bowl.

You'll also notice the pattern on the white jerseys with a hint of grey. That could just be the style of jerseys adidas has implemented, the sort of "technology" you'd see touted in a press release. It could also be an intentional design choice intended to spice up what is an otherwise bland -- but classic, don't get me wrong -- white-and-red jersey.

My take on this combination? I'd be surprised if the sleeves weren't available to players, but of course not everyone has to wear them. Red pants in the regular season seems like a bold move, given past history, but perhaps they'll want to mix it up for a big road game this year (Ohio State?).

What do you think? Is this a uniform combination you'd like to see Wisconsin implement, or do certain elements need tweaking?