Marcus Cromartie's journey to the NFL begins in San Diego

The former Wisconsin cornerback is looking to make an impact for the Chargers as an undrafted free agent. Can he stick in the NFL?

Share All sharing options for: Marcus Cromartie's journey to the NFL begins in San Diego

This week, NFL teams open up their respective training camps. Veterans, young players and rookies will battle for 53 spots on 32 teams over the next several weeks. Wisconsin has produced solid NFL prospects in the past few years, especially in Texans All-Pro J.J. Watt and Seahawks signal caller Russell Wilson. Three Badgers -- Travis Frederick, Montee Ball and Ricky Wagner -- were selected in April during the 2013 NFL Draft.

Others, like cornerback Marcus Cromartie, were not, but signed with teams with hopes of making an impression worthy of a roster spot. The former UW defensive back started training camp with the San Diego Chargers on Thursday, competing to fulfill a dream of playing in the NFL. 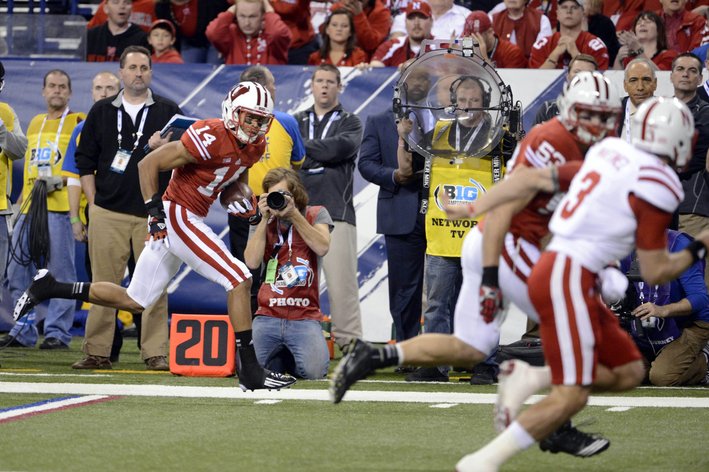 "I think I kind of walked into a good situation, with a new GM [Tom Telesco], a new head coach [Mike McCoy], a new defensive backs coach [Ron Milus], so it's kind of like a fresh start for everybody," Cromartie said Sunday night on the Kielbasa Kings Sports Extravaganza. "OTAs went well, as well as minicamp, so I'm just excited for training camp this week."

The three days of the draft had their share of emotions for Cromartie, as well.

"Just watching the rounds go by, watching the picks go by, and I mean, different coaches would call you throughout the draft and say, 'I'm gonna be looking at you in this spot, looking at you in that spot,' and the spot would go by. I mean you got to take it all in stride, and at the time I was disappointed, but things happen for a reason, so I'm just gonna take my opportunity and run with it."

Cromartie signed with the San Diego Chargers on May 13 and has been through the team's Organized Team Activities (OTAs) and minicamps. He knows there's a difference between the college and pro game.

"I think everything has a transition period. Even in the NFL, ultimately you gotta learn how to be a pro -- that's what you are, a pro," he said.

"I think the NFL is different. In college, everything is allotted. 10 minutes here, 10 minutes here, hour here, hour there. NFL is more like, you come in and do your job and then you got free time. And what you do with your free time is ultimately makes you the best player you can be, if that is getting treatment, getting in the cold tub/hot tub, watching film. That's what makes you a better pro."

Cromartie feels his time as a two-year starter for the Badgers helped him prepare for this chance in the NFL.

"Obviously, there's gonna be ups and downs in professional, at practice and just in life in general. You have to keep coming back and keep telling yourself you're gonna be better, and that's basically what I took from my career at Wisconsin."

"The main thing I've taken is keep competing, never give up," he said. "I felt like I played my worst game against Oregon [in the 2012 Rose Bowl] and just coming back for my next season and not letting that determine my career, and then playing my best football my last season at Wisconsin. Obviously, there's gonna be ups and downs in professional, at practice and just in life in general. You have to keep coming back and keep telling yourself you're gonna be better, and that's basically what I took from my career at Wisconsin."

In the few weeks or so in between teams' last OTA sessions and the beginning of summer training camp, many players take vacations, get married (like former Badgers guard Kevin Zeitler) and generally rest their bodies before the grind begins. Marcus, on the other hand, went to Los Angeles to train with his cousin, New York Jets All-Pro cornerback Antonio Cromartie.

"He's been really helpful in helping me transition for my first year," Cromartie said. "We've been competing. Obviously, this is the time to relax and make sure your body's right for training camp, but at the same time, you want to make sure you're in pretty good shape."

Although taking the time to train extra with his professionally successful cousin up the Californian coast, Cromartie has had time to get to know San Diego and enjoys his surroundings.

"The good thing about OTAs and minicamps is it gets you a lot of free time. We come in the morning, and we do our job, and the afternoons are pretty free, so I got to get out on the city a few times, especially the weekends," he said.

"One thing you learn about the city of San Diego is the weather is awesome. We don't even have an indoor facility, if that can tell you anything. It's 75 degrees here today, and it only rains 10 times a year. The city itself is pretty amazing, I gotta say."

Cromartie's kept in touch with several of his former secondary teammates, including Aaron Henry, Shelton Johnson, and Devin Smith who are all still competing for a shot in the pros.

"We all just talk about going out and competing and just having fun," Cromartie said. "I mean, obviously, the risk of getting cut is there. As long as we're playing the game we love, let's just do it. Let's not worry about all the logistics that go with it."

With 90 players on the Chargers' roster at the start of training camp, 36 are rookies or first year players, with 21 others in their second or third seasons. Cromartie hopes to show Telesco, McCoy and the Chargers organization he deserves a spot on their team.

"The GM has a great plan going forward, and I just hope that I'm part of the plan - going down there and with busting my butt and doing everything I can to be successful and making this team better."