Changes in diet and attitude last season were steps in the right direction for Frank Kaminsky, but will they be enough for the 6-foot-11 big man to provide a serious low-post presence?

Share All sharing options for: Badger Bits: It's your turn, Frank Kaminsky

During his tenure in Madison, head coach Bo Ryan and his staff have received national attention for their work in developing lanky high school players into successful college athletes. This has been particularly evident in UW's frontcourt over the last few seasons with the likes of Jon Leuer and Jared Berggren.

Although both arrived as four-star recruits, they had to "grow into their bodies" in order to becomes fixtures in the post. If you glance over Leuer and Berggren's college stats, you'll notice both made significant gains in minutes and consistency on the court in their third season of playing time. Now, it's time for forward Frank Kaminsky to do the same. 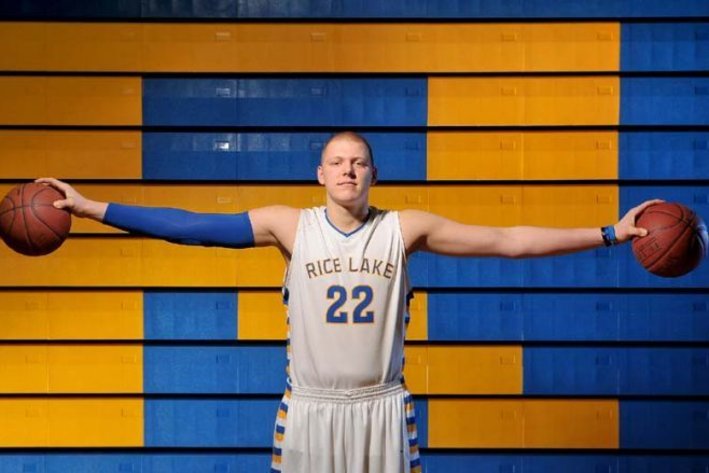 Following a season of uncertainty in Wisconsin's backcourt with veteran players in the frontcourt, it appears the 2013-14 season will be quite the opposite. The Badgers will feature a deep rotation of guards but lack serious depth in the post.

Kaminsky is currently the most experienced big man on UW's roster, which is a bit alarming considering he averaged just over 10 minutes a game last season.

Jesse Temple of Fox Sports Wisconsin wrote about Kaminsky's importance to the Badgers and how he's embracing his new role. Kaminsky even described how he cleaned up his diet last season, especially by kicking Qdoba to the curb in favor of healthier alternatives. But although Kaminsky is saying all the right things, can he be the next Leuer or Berggren? Can he take the next step in the progression of Wisconsin big men?

It's really not an option. For the Badgers to remain competitive in a physical Big Ten conference, it's imperative for Kaminksy to bolster his game and assert himself under the basket.

Fascinating interview with Russell Wilson following his youth football camp in Madison over the weekend, including what type of reception he expects when his Seahawks travel to Lambeau this fall.

Director of Athletics Barry Alvarez and coaches throughout the UW athletic department thank Badger fans for their support of Wisconsin athletics (specifically, a 95 percent renewal rate for football tickets to go along with 1,800 new season ticket holders).

Yeah, it may be unrealistic, but who cares? BTN's Tom Dienhart maps out the ULTIMATE season-long road trip for Big Ten fans this season. Interesting take: Dienhart would have you watching Northwestern more than any other team in the conference.

The biggest rush for me is when you go through game week and you hit everything you did and the players buy in and are ready to roll and believe they are going to win and have done the necessary studying and have asked the right directions. And as a coach, you have been given the time and resources to succeed, and you go into a game confident and you know you are going to win. I attribute that to Coach Andersen’s approach. We went into every game with that feeling. And it’s a great feeling. We wanna get that going again.

Some cool new pics inside Camp Randall (Just 60 more days till the opener!):

View from the top of the new scoreboard at Camp Randall #Badgers pic.twitter.com/kN0rMg3HzO