Josh Gasser continues to make progress in his rehab from a torn ACL. With a remarkably young roster coming into 2013, how good can the Badgers be with a healthy Gasser?

We're all considerably excited about the future of Wisconsin basketball, but with just how young this team is right now, how good can it be in 2013? That's the million-dollar question, granted, but I had just that discussion last night with some friends and I couldn't really decide where I stand. I'm tempted to lean toward this year being a potentially underwhelming, they're-just-too-young kind of season. Bronson Koenig, Nigel Hayes and Vitto Brown are exciting, and it'll be sweet to see how much Sam Dekker develops after his freshman season.

But can you really rely on that much young talent, that heavily? Especially with much of it focused in the frontcourt?

One thing that'll absolutely help everything will be the return of a healthy Josh Gasser. After bum luck led him to a torn ACL in practice Oct. 27 (the same day as the crushing, Joel Stave collarbone-breaking loss to Michigan State), Gasser continues to rehab with new strength coach Erik Helland. Mike Lucas has a good look inside that recovery process, as well as a glimpse into Helland, who replaced Scott Hettenbach in May as Wisconsin's head strength and conditioning coach after serving on the Chicago Bulls' staff since 1988. Helland seems cool, even after dropping this kind of weird, kind of funny, generally nice bit of trainerspeak:

"The first time I met him (Helland),'' Gasser recounted, "he said to me, `I love ACLs, I love working with them.' That kind of struck me that he was all in for me and he was going to try and help me out. Personally, every time he talks, I'm listening, I'm taking in everything he says.

Hey, I love ACLs, too. Especially when they're fully intact. Let's keep them that way, eh Josh?

Why College Football Will Be Dead Within 20 Years | Corn Nation

This is a bold take, and the argument is one we've probably all scoffed at before. My crystal ball's a little dusty, but I found this piece from our SB Nation college bros well worth a read. It doesn't just hit on the extremely well-noted concussion and health issues, but also the business side of skyrocketing cable fees and whatnot. There's also this, which is probably the central point:

The biggest problem facing college football comes from within colleges and universities themselves.

College football will die as we know it because within the next two decades colleges and universities as we know them will cease to exist:

Some people, like Harvard Business School professor Clayton Christensen, predict that in as little as 15 years half of the colleges in the United States will be in bankruptcy, upended by online learning and the move to hybrid models in which only select classes are taught in person on campus. Others see more incremental shifts, with virtual learning remaining a tool rather than a transformative technology in higher education.

Yo. I imagine this is a polarizing piece, but that only means the discussion should be fascinating. Is Jon Johnston onto something?

This is big: active players are now part of the likeness lawsuit against the NCAA. Arizona Wildcats Jake Fisher and Jake Smith, Minnesota Golden Gophers Moses Alipate and Victor Keise, Vanderbilt linebacker Chase Garnham, and Clemson cornerback Darius Robinson are the big six, and as Patrick Vint explains, their inclusion is interesting, if not kind of confusing:

The use of everyday players could also counteract one of the NCAA's strongest arguments against class certification. Should O'Bannon successfully argue that players deserve a share of proceeds for the use of their likenesses, the NCAA has claimed that star players would be entitled to damages greater than role players. Such a differentiation may lead the U.S. District Court to deny class certification, effectively derailing O'Bannon's claim and potentially generating a cottage industry of litigation by individual players.

This was published yesterday, but it's so much fun that I had to make sure you all saw it. I think we all remember that slim period of time where Hall was purely dominant as a kick returner, and I think many of us would leap at the chance to relive it. 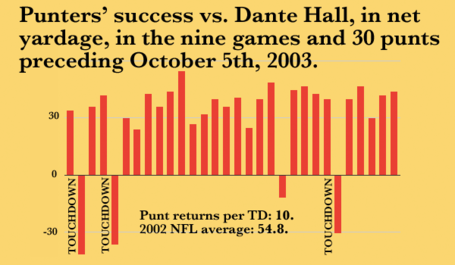