The ol' ball coach made a(nother) mistake on Twitter yesterday, and by now you know what kind of reaction that elicits. WPS indeed, Bret.

Share All sharing options for: Badger Bits: The misadventures of Bret Bielema continue

There are 51 days left until Wisconsin football returns. At least I think that's the number, and if I'm right, we'll have a cool 50-day countdown to coincide with tomorrow being Friday. Hooray, round numbers.

In fairness, this really isn't so bad. For those of us who cam down in front of our computer screens all day long, the standards for hot sports takes and hilarious, sarcastic social media endeavors hit purely ridiculous heights. Considering Bielema has, you know, a football program to run, we'll grant him an LOL here and move on... except there a few great things about this:

1. The return of this picture, which somehow can be found in the archives of most major photo wire services: 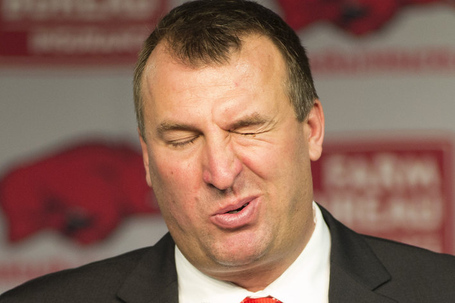 2. Bielema deleted the tweet pretty quickly, so SEC speed and all that.

3. As our bud Rodger Sherman points out in the link above, Bielema managed to coincide this latest gaff with the release of Arkansas' media guide -- actually, no, just the cover. Weird. But that cover glaringly tries so hard to let you know "WE DO SOCIAL MEDIA," as you can see right here. Yes, Arkansas. We know.

Because there's no way Marshall Henderson could go quietly* into the full night of the offseason, we have this story. Digs aside -- perhaps we're still bitter from March -- this is kind of a sad story, because while Henderson can frequently be obnoxious, he's clearly talented and I think most of us enjoy talent blossoming to its great potential.

Henderson may end up seeking rehab now, and if that's the case, here's hoping he can turn things around.

*Asterisk here because Henderson kicked off Wednesday with this tweet, leading many to believe that was the cause for the suspension before the failed drug test was reported.

As you may remember, Stewart Mandel made the bold move of doing a best/worst coaches list earlier in the week. He revisited that list with a mailbag yesterday, beginning it with the generally entertaining tweets of angry Iowa fans. Kirk Ferentz, if you remember, was one of the five worst coaches. About them, Mandel had this to say:

Folks, I have never seen a fan base defend a coach coming off a 4-8 season the way Iowa fans defended Ferentz this week. It's been incredible. ...

College sports get B for diversity | ESPN.com

I think the fact that this story gets just four "sentences" of coverage in an AP blurb says a lot, but of course the front-page headline reads "Diversity institute: College sports regressed." Aside from the fact that the "B" grade is reported without any context -- I can remember more than a few college classes where I gladly escaped a semester with a B, sadly -- the report is also inherently misleading. The report, which addresses gender and racial hiring practices in college sports, includes a few dips in racial hiring, but increases in gender hiring -- that phrasing sound weird to anyone else?

Also, the overall score fell to 81.1 from 81.5 That seems fairly minor to me, so again, I think some more context would be helpful here.

Wrapping up: NHL 94 will be implemented in the upcoming release of NHL 14, and as the summary here states, that means we're probably all gonna buy it.