If you're unaware, B5Q is doing a new thing where links go in the their own separate post. I'm now free from the oppression of link scouring, which wasn't an oppressive task at all, actually, and now I'm finding myself missing my shackles a bit. I'm not really sure what this space should be now, and I'm anxious to see it evolve. Mike suggested free-form poetry. I like that idea, though I may explore conventional forms a bit further. Until you guys shout me down I promise to remain relatively weird. Promise.

But first, something topical. Jacob Pedersen was named to John Mackey Award watchlist, which isn't at all surprising. Preseason watchlists for college football awards consist of everyone you may have vaguely heard of in passing at any big school, plus maybe a good small school dude or two. Ohio State's Jeff Heuerman was named to the watchlist. Jeff Heuerman has all of nine career receptions.

If there are people in this world who bet on the winner of the Mackey Award, they are probably giving better odds to Pedersen than Jeff Heuerman. In fact, Pedersen was good enough to be named a semifinalist for the Award in 2011 after catching 30 passes for 356 yards and eight touchdowns. He missed the cut in 2012, but his production took only a slight dip. Pedersen had 27 receptions for 355 yards in a Russell Wilson-less offense, which is probably what accounted for the big dip in touchdowns, from 8 to 4. 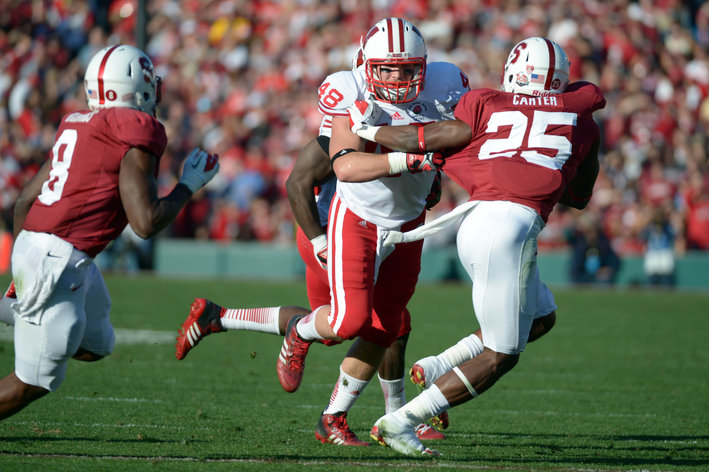 An offshoot of the unanswered questions at wide receiver? The tight ends for Wisconsin are so intriguing, we could well see a couple split out wide this season.

Pedersen's 2012 season could be considered an improvement. He was a modestly bigger part of the offense, catching 16 percent of Wisconsin's completed passes vs. 13 percent in 2011, and he went from being the Badgers' definitive No. 3 option to the definitive No. 2. Institute Bart Miller and a teflon Joel Stave from Week 1 onward, and Pedersen could have had much better numbers.

So Pedersen is, by the numbers, pretty good, but is he good enough to be join the rarefied air of Mackey Award winners? Possibly, though describing Pedersen's best assets is a difficult task. He is slightly undersized as an inline TE at 6'4, 241 pounds, and he isn't a mauler of a blocker as a result. He moves well enough that Matt Canada felt comfortable calling his name on an end around, but he has yet to do anything jaw-dropping on the field. Pedersen gets open and catches the things you throw at him, however, and that's incredibly valuable.

The better question: Will Pedersen have the opportunities to compete for the award? If Utah State's offenses under Gary Andersen are any indication, then no. In Andersen's four years as head coach, only one tight end ever had more than 15 receptions in a season. Kellen Bartlett was able to haul in 38 passes last year, five for touchdowns, but he was the Aggies' fifth most productive pass catcher with just 272 yards receiving.

Andy Ludwig provides more hope. San Diego State had no problem throwing to their bona fide NFL prospect tight end Gavin Escobar the last two seasons. Over that span Escobar had Mackey-esque numbers, with 93 receptions for 1,323 yards and 13 touchdowns. Ludwig's OC days at Cal and Utah were leaner for tight ends, but he apparently had a good time dialing up red zone calls for someone named Tim Day at Oregon in 2004.

The biggest factor, however, may be the quarterback situation. Pedersen was downright explosive when catching the ball from Joel Stave. The two connected 11 times last season for 192 yards, an average of nearly 17.5 yards per reception. Pedersen averaged just over 10 yards catching passes from anyone else. Should Tanner McEvoy start, his mobility could draw defenders and create more space for Pedersen to run after the catch, though McEvoy is still an unproven commodity.

Wisconsin has had a mighty fine tradition of tight ends over the last few years, from Owen Daniels, to Travis Beckum, to Garrett Graham, to Lance Kendricks. If Pedersen isn't recognized as the best tight end in college football this year, he at least has the chance be held in similar regard to those who came before him (only Beckum and Kendricks were named finalists for the Mackey). Given the right circumstances, Pedersen can be just as productive, but a new head coach and Wisconsin's third offensive coordinator in three seasons mean that we truly don't know anything.

I don't know how anyone will think of Pedersen when he is gone. I don't know how to think of him today. He has been around forever, but mostly as a spot player, contributing dutifully when called and lying in waiting in the meantime. It's an awkward spot to be in for a multi-year starter who has done everything he has been asked. James White, Jared Abbrederis and Chris Borland were selected as Wisconsin's player representatives at Big Ten Media Days, and no one batted an eye because all three have made plays that have won games for Wisconsin. Like his three teammates, Pedersen is also entering his senior year, yet somehow he still has everything to prove.