Are Wisconsin fans complacent, or do they just hate the NBA?

Have you ever wanted proof that Badger fans are the good kind of fans? A new study ranking Wisconsin low in producing NBA talent (duh) but high in brand equity is a step in that direction.

Share All sharing options for: Are Wisconsin fans complacent, or do they just hate the NBA?

If you cruised around SB Nation at all this weekend, you may have stumbled across some of the great work done by a pair of professors at the Emory University's Goizueta School of Business regarding talent development in college athletics. Louis linked to some of their football research earlier today in Badger Bits.

Michael Lewis and Manish Tripathi created the wonderful Emory Sports Marketing Analytics blog to share some of their work investigating "brand equity and customer loyalty" in sports. I'm sure the football-related material gets more oohs and ahhs, especially around these parts, as studies have started giving Wisconsin its due when it comes to churning out draft picks.

As a hoops nut, I'm finding the college basketball numbers more interesting because I haven't seen as much data on the sport.

In their research, the two professors sought to analyze the best fan bases in college basketball using a revenue-based method, then also captured which programs converted more of their top-rated high school into NBA draft picks, very similar to the duo's football research.

Wisconsin ranked fourth in the conference in Lewis and Tripathi's Revenue Premium Based Brand Equity Rankings. Brand equity (i.e. the quality of a team's fan base) was calculated by comparing actual revenue per year over the last five years to expected revenue given the school's on-court success. Though none of its teams ranked in the top 10 overall, the Big Ten was the highest rated conference according to the results. So, pretty good for the Badgers, right? 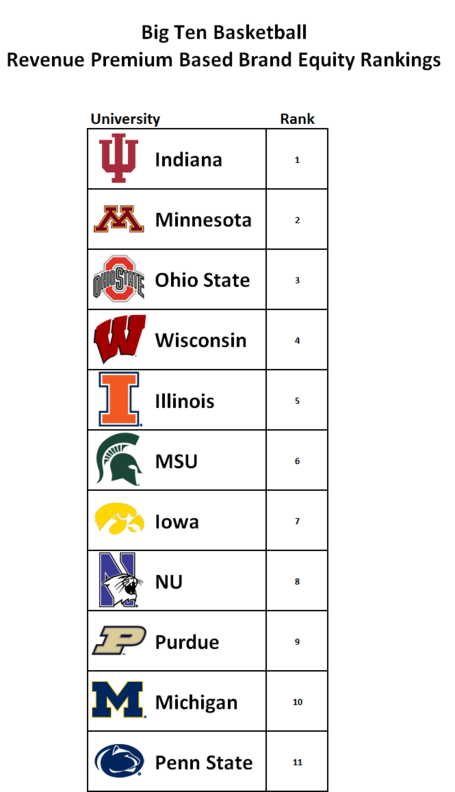 Draw your own observations, but the standouts were obviously Minnesota being so high and national runner-up Michigan being so low. Also a sad face for Purdue.

Brand equity aids in recruiting, for obvious reasons which have always been harder to quantify. When it comes to Wisconsin basketball, recruiting enthusiasm among fans usually alternates between "there is nothing to get excited about" and "OMG, they've signed a 3-star kid who looks pretty special" (and much thanks to Sam Dekker for breaking up that monotony).

This time, Lewis and Tripathi used data from a recent 10-year period to come up with the best NBA talent processing factories.

Yet here, Wisconsin is very low. And not only in the Big Ten. The program's "conversion rate" against expectations in the last five years would place it near the bottom of almost every conference for which the Emory professors have released their findings. 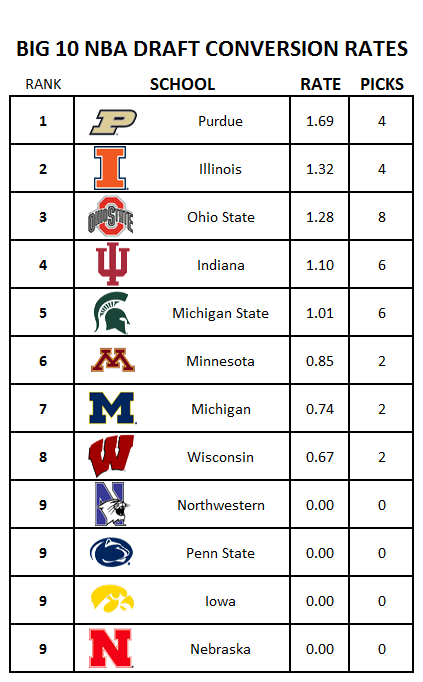 Some of the others results are shocking at first, too (domination by Boston College, Iowa State, USC, etc.) but they make sense after reading through the methodology.

Even so, now there exists a disconnect for Badger fans. This is the first bit of evidence, if you will, which a Spartan or Gopher fan could use to support the notion that Bo Ryan actually underperforms in player development based on the talent he signs.

But the finding is only relevant as it pertains to NBA draft picks, which certainly isn't the only way of measuring the quality of a college basketball program. Heck, it might be a downright terrible way to look at things. Sadly, the top recruits may not always consider that angle.

The good news is that Wisconsin fans still support their men's basketball program at a high level regardless of what it may lack in NBA relevancy. This proves there doesn't have to be any connection between the two. (We can all thank the Milwaukee Bucks' decade of mediocrity for lowering the state's collective interest in pro basketball.)

I would argue, though, that the correlation does say a lot about the expectations surrounding Wisconsin's program and how well the athletic department has marketed and supported its teams since bringing Pat Richter aboard as AD in 1989. Generally speaking, we don't care how good the athletes that don the cardinal and white are, we just enjoy winning.

Just for a second, stop to imagine what effect signing a few 5-star recruits in the coming years might have on that prevailing attitude.

At any rate, the guys at Emory have promised even more in-depth analysis of recruiting and draft picks in the coming weeks. It dovetails nicely with the NBA pedigree series running on ESPN's college basketball blog recently, which I hope to do a related post on soon. You can follow Lewis and Tripathi's work through Twitter @sportsmktprof.