Of course, it was for a good cause, and it's not a completely clean shave. Plus, he's getting first-team looks in Dallas.

His poor performance at the NFL Combine left much to be desired by professional scouts and executives. Even his abysmal bench press mark -- just 21 repetitions of 225 pounds -- bewildered most Badger after hearing about the guy's outrageous capabilities in the weight room for four years.

But Travis Frederick is proving during Dallas Cowboys OTAs why the measurements and numbers aren't always indicative of a player's true potential. Especially when you consider the center position, throw out all those excessive tests and ridiculous drills.

It's really quite a simple process. Now I know more goes into being a center than the elementary description given above, but you get the gist.

Frederick knows how to play center, and he knows how to do it at an elite level. Was it surprising he went in the first round of the NFL draft? Absolutely. But then again, the Cowboys are run by one Jerry Jones, and his mind operates differently than just about anyone else's in the league.

All Frederick needed was one team to take a shot. He got exactly that at the end of the first round, and for that I say, "Thank you, Cowboys."

While Frederick still has much room for improvement, here is the latest from Dallas Cowboys football analyst/scout Bryan Broaddus:

Rookie Travis Frederick took the majority of the snaps at center with Phil Costa and Ryan Cook serving as the backups. Frederick was much better in this practice handling the twist stunts in the blitz period than he was at the rookie mini-camp. Where Frederick had his struggles was sitting down on rushers like that used power against him. There was were a couple of times where he didn't adjust to the quickness and burst of Jason Hatcher and he was walked back. There was another play where Robert Callaway got the best of him with a power move. He also took a nice shot to the head when he went up onto the second level and ran head first into Sean Lee who stopped him in his tracks. What Frederick is going to have to learn against these veteran players is how to finish blocks.

In unfortunate Travis Frederick news, he shaved his immaculate beard yesterday. What a sad, sad day -- though he did chop it off for a good cause. 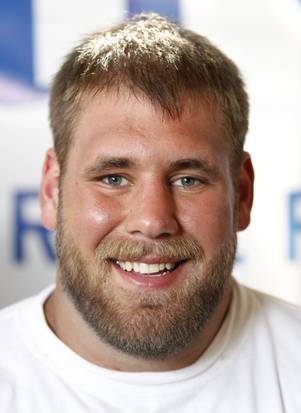 Jared Berggren has been invited to pre-draft workouts for multiple NBA teams, and he says playing in the league would be a "dream come true."

Madison is a place that exemplifies the mantra, "Work hard, play hard." That also goes for the student-athletes, who excel beyond their respective playing fields, as well. 138 Badgers were named to the spring Academic All-Big Ten Team earlier this week.

Rutgers says thanks... Ohio State president Gordon Gee is in some hot water after lambasting, well, many things yesterday. For a guy with as much power and swing as Gee, the comments were off base -- but I say amen to the SEC jab.

... but reminds us it's still indeed Rutgers. One last head scratcher to end your week: the university spent $70,000 on a background check for new AD Julie Hermann. What? That seems like it worked.