What Gary Andersen's trip to Culver's means for Wisconsin Football.

Gary Andersen 's visit to Culver's was by far the most exciting thing that happened yesterday. Living in New York, it made me long for the comforts of tacky booth seats and cheap prints of flowers and sailboats, not to mention $1 cheese curds and scrumptious ButterBurgers. 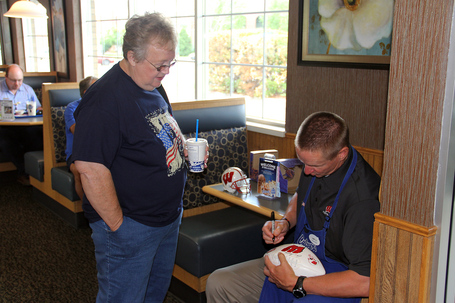 GARY ANDERSEN WON'T FUMBLE THE DANG FOOTBALL, YOU CAN BET ON THAT

Look at the grip on that white souvenir football. That's five points of contact, fingers spread wide at 3-inch intervals. That lady will not be taking that ball back until Gary Andersen is done putting his dang Hancock on it, nor will anybody else. I sure hope James White and Melvin Gordon are paying attention!

GARY ANDERSEN SHOULD HAVE GIVEN UP HIS SEAT FOR THAT LADY

I refer you to Core Value No. 2. I don't care if you were up late cutting film then had to get up early for a publicity stunt, that woman should be given a seat, and you should make dang sure to ask if she needs a refill. Is she drinking an Oreo milkshake? Does Culver's have those? Doesn't matter, because you're already pounding out Oreo crumbs in a Ziploc bag just in case. Where is your head, Coach? I sure hope you can keep your head in the game on Saturdays!

#Badgers Coach Andersen delivers some @culvers to a car w/a #Gophers sticker. Guy said it was his sister's car twitter.com/BadgerFootball…

It's worse than we feared. How could Coach Andersen let this man enter the drive-thru, much less get his food without a thorough interrogation? The guy said he was driving his "sister's car." Ha! That story has more holes than an order of Culver's delicious onion rings. If he'll let Jerry K. Gofer pull the wool over his eyes at a fast food restaurant, imagine what Minnesota will try to get away with on Nov. 23.

That old rascal. Sure, Coach Andersen comes off as having a squeaky clean persona; squeakier than Culver's delicious fried cheese curds before they're dipped in oil, even! But beneath that lovable exterior is the soul of a wily old badger. Methinks our good friends, the Gophers, have no idea what's in store!

I'M CONCERNED ABOUT THOSE HAMBURGERS, AND BY EXTENSION, THIS SEASON

Is it just Coach Andersen managing that grill? He looks like he needs help in this picture. Is he asking for help? Do we want a ball coach who needs help? There are two rows of patties that clearly aren't being flipped in sync. By the looks of things, the first row will need to be flipped when the second row is finishing. Something is bound to burn! Will we see the same thing on gamedays? Will Andersen panic on the sidelines, just like 'ol Bret "Burn Our Timeouts" Bielema? That's no way to run a team, coach. Get your act together!

THOSE HAMBURGERS, AND BY EXTENSION, THIS SEASON, WILL BE FINE

Relax, Coach Andersen has everything under control. Everyone knows that Culver's griddles are set to just the perfect temperature so that their patties cook thoroughly in minimal time and minimal risk of charring. Even still, you can be sure that Andersen checked everything out before he picked up a spatula. See that look on his face? He's telling the man behind him "back off son, Coach A got this." That confidence reminds me of a young Bret Bielema, who faced down "critics" and "haters" before taking Wisconsin to three straight Rose Bowls. Hopefully Andersen will know how to use his timeouts better!

#Badgers Coach Andersen has taken over the grill Culvers vine.co/v/b9dgw0UOKKl

DOES HE FLIP THE BURGER, OHGODIDON'TKNOW

There is a burger, and whether it is flipped skillfully and in time will determine whether that burger is juicy and delicious, or dry and unbecoming of Culver's name. We have no idea what happened to this patty in particular. It may be that everything already has.

In one universe, that patty landed in the most delicious deluxe ButterBurger ever created, and Andersen was revered by the patrons of Culver's. A few years down the road, Andersen might even be named the greatest chef to have ever manned a griddle. There may be a parade, trophies, and, heck, maybe they will build a statue in his honor! In another universe, that ButterBurger was undercooked, sending a 62-year-old Oconomowoc woman with tired legs to the hospital. Thousands vow to never attend Culver's again. Culver's will struggle to bring in skilled waiters and cooks, and after years of budding momentum, the restaurant will forever be regarded as a third-tier fast food restaurant. Alas, the fate of the burger is unknown, just as the fate of our lives.

The burger is an analogy for Wisconsin football, by the way.

Beau Allen is one of the best defensive tackles in the conference, says OTE.

Oh, and a Gopher potluck.

Michigan believes Ohio should be exempt from the United States, which is probably okay with everybody.

Former Rutgers quarterback Ryan Hart won an appeal to pursue a lawsuit against EA Sports for using his likeness in the NCAA Football series. Given how far the Ed O'Bannon case has come along, Hart could be another stake in the heart of the NCAA down the line.

Beer and Loathing is a very fine title.

Grantland comes up with 20 types of depressed sports fans.