The Big Ten once again has its New Year's Day cluster, with five bowls competing for space on the airwaves.

The final BCS bowl schedule was released on Wednesday, setting the stage for the final lineup in the pre-College Football Playoff era. The final BCS National Championship will be played Jan. 6, 2014, and there a few other changes that SB Nation's Jason Kirk laid out here. 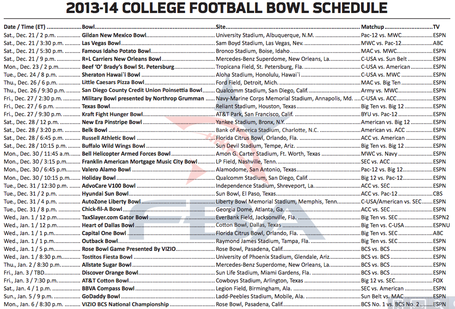 Assuming the Big Ten does indeed place a team in the Rose Bowl, five conference teams will be playing on New Year's Day. That holiday cluster is nothing new -- Big Ten teams went 1-4 on New Year's Day last time around, with only Northwestern managing a win. It's also relatively frustrating -- between the forced channel-surfing (my attention span is limited enough as it is) and the Big Ten's recent level of bowl-season crapitude, the cluster is generally aggravating to most fans of the conference.

Also, and it's probably not much compensation, but this schedule brings the 100th Rose Bowl Game Presented by Vizio. Presumably, the first few Rose Bowls weren't Presented by Vizio, but either way, that's a cool round number we can celebrate. Rose Bowl stadium renovations are also expected to be completed by then, so that'll actually be cool. At least I think so -- this schedule .PDF is one heck of an eyesore.