Rutgers' pool of AD candidates was trimmed over the weekend, leaving the embattled university with a pair of candidates that also have previous issues to explain.

It's been a week or so since we've heard more regarding Wisconsin deputy athletic director Sean Frazier's candidacy for the vacant Rutgers athletic director position. Tom Luicci of The Star-Ledger put forth some new information, however, with a Monday report not only confirming the pool of candidates has dwindled to two, but illuminating the fact that each one still has significant past issues to address.

Rutgers, of course, remains embroiled in heavy-duty image repair after the Tim Pernetti resignation/Mike Rice scandal and last week's revelation that new men's basketball coach Eddie Jordan never actually earned a degree from the university, despite explicit statements to the contrary. Luicci reports the two finalists to replace Pernetti are Frazier and Julie Hermann, the senior associate athletic director and senior woman administrator at the University of Louisville. Fresno State athletic director Thomas Boeh was previously considered a finalist before he withdrew from consideration on Sunday night.

At this point, the "issues" attached to both Frazier and Hermann don't seem significant enough to prevent the hiring of either one. Of course, the "at this point" caveat is necessary because Rutgers really needs to nail this hire with 1) the 2014 transition to the Big Ten looming and 2) the fact remaining that it's nowhere near the clean program it surely wants to be. 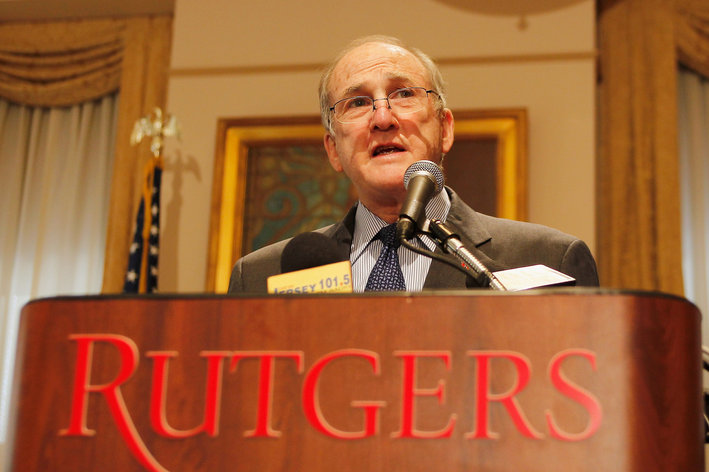 On the Banks cites the need for due diligence as a reason to delay the search.

Frazier will have to address the scandal the University of Wisconsin faced when former athletic department administrator John Chadima allegedly made unwanted sexual advances toward a student employee of the department at an alcohol-fueled party prior to the 2012 Rose Bowl. Neither Frazier nor Director of Athletics Barry Alvarez was at the party, though they are obviously the two people bearing the most responsibility among the department -- Alvarez's role and statue need no further explanation, and Frazier is essentially in charge of the daily operation of UW's athletic department.

An internal investigation by the university blamed a lack of oversight that allowed underage drinking at an athletic department-sponsored party for far too long, leading to Chadima's ultimate resignation and the whole story essentially fading away fairly quickly. Otherwise, Frazier's tenure at Wisconsin has been generally spotless since coming to the university in 2007.

As for Hermann, her previous history reads somewhat murkier. From Luicci's report:

In the case of Hermann, the senior associate athletic director and senior woman administrator at the University of Louisville, a pregnancy discrimination lawsuit filed against the University of Tennessee when she was the head volleyball coach there is something Rutgers officials would have to reconcile if she is hired.

Assistant volleyball coach Ginger Hineline won her $150,000 suit against the school in 1997.

According to the Knoxville (Tenn.) News-Sentinel's reporting on the suit, Hineline said she asked Hermann if she would lose her job if she became pregnant and that Hermann responded by saying "I hope it doesn't come to that."

"Julie and I had various conversations that discouraged me from becoming pregnant," the paper quoted Hineline as saying.

Hermann may also have to explain why she is suddenly interested in becoming an athletic director for the first time after telling The Chronicle of Higher Education, in a 2011 story about female college administrators, that she enjoyed her role as "silent partner" to athletic director Tom Jurich.

The article said Hermann "relishes the responsibilities she has as the Cardinals' No. 2." She is in her 16th year at the school.

"I've never thrown my hat in the ring (to be an athletic director)," Hermann was quoted as saying. "I'm not interested in being a candidate."

Now she is a finalist to assume command of athletic department awash in turmoil and red ink.

One more distinction worth making: Frazier, in addition to his daily duties overseeing the entire athletic department, oversees Wisconsin's landmark football program. Hermann supervises 20 of Louisville's 23 and oversees the school's marketing efforts and fundraising, but she would be adding football as a new responsibility for a program desperate to make an imprint on the Big Ten over the next few years.