The Big Ten has realigned its divisions for football. Best news of all? They are punting "Legends" and "Leaders" as division names.

The new divisions will be aligned geographically, and will go by the names East and West. That means the league will do away with the heinous 'Legends' and 'Leaders' division names.

Wisconsin will be in the West, along with Illinois, Iowa, Minnesota, Nebraska, Northwestern and Purdue. The East will contain Indiana, Maryland, Michigan, Michigan State, Ohio State, Penn State and Rutgers. 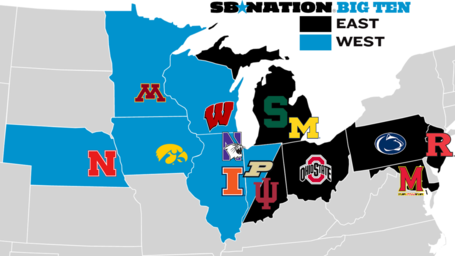 From the Big Ten press release:

The new division alignments will feature Indiana, Maryland, Michigan, Michigan State, Ohio State, Penn State and Rutgers in the East Division and Illinois, Iowa, Minnesota, Nebraska, Northwestern, Purdue and Wisconsin in the West Division. All schools in the East Division are in the eastern time zone and all schools in the West Division are in the central time zone with the exception of Purdue. Each school will play the other six schools in its division plus two teams from the other division in 2014 and 2015, which will serve as transitional years in which the schools will still be playing eight-game schedules. Beginning in 2016, each school will play three teams from the other division as part of its nine-game schedule. The cross-division games will include one protected matchup on an annual basis between Indiana and Purdue.

The new alignment means that Wisconsin will play long-time rival Iowa every season, in addition to Minnesota, which had been considered a cross-division protected game.

Based on recent program strength, it also appears that the Badgers are making out like bandits in terms of the strength of the West compared to the East. Nebraska is always tough, but compared to Michigan State, Ohio State, Michigan and Penn State in the East, Wisconsin came out of this smelling like flowers.