Breaking Down the Joel Rumpel Save vs. St. Cloud State

Share All sharing options for: Breaking Down the Joel Rumpel Save vs. St. Cloud State

During Friday's WCHA Final Five semifinal contest between Wisconsin and top-seeded St. Cloud State, there was a controversial save made by goaltender Joel Rumpel. The Badger netminder makes the first save on an SCSU shot, but as the rebound is being shot towards the open part of the net, Rumpel's stick comes flying out of nowhere to make the save.

The play was reviewed, and ruled no goal. If the referees were to have ruled that Rumpel threw the stick on purpose, they would have awarded a goal to St. Cloud State. SCSU fans have been in a tizzy all week over this, so I went back and broke down the film to explain the play and why it clearly shows no intent on Rumpel's part to throw his stick.

Part 1) Rumpel has made the initial save and is retreating to get in position to handle the rebound that he kicked into the slot. UW defenseman Kevin Schulze is right outside of the crease trying to defend the net. Notice the stick angle and position of Rumpel's blade. When a goaltender is in this position (panic mode) and is looking to dive across the crease, he wants to swing that arm out wide so that he can stop any sliding shot on the ice. 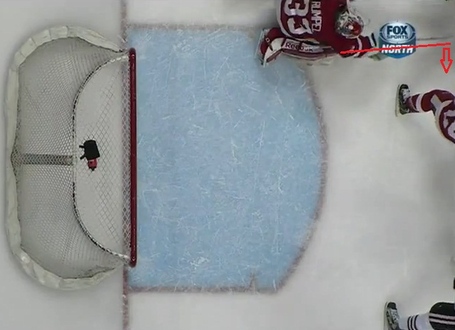 Part 2) As Rumpel tries to swing the blade of his stick to the right, his whole stick evens out as the trajectory of the blade is going from his left to his right. Notice that Schulze has drifted closer to Rumpel, and that Rumpel's stick is on a collision course for Schulze's skate. 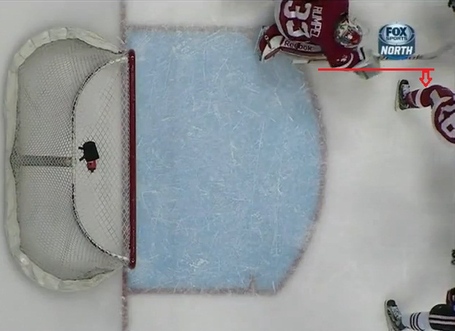 Part 3) Rumpel's stick collides with the toe of Schulze's skate, which changes the trajectory of Rumpel's stick and jars it from his hand. The blade of the stick had been going left to right, but with impact is now headed back right to left, while the knob continues to go left to right in a lever fashion. 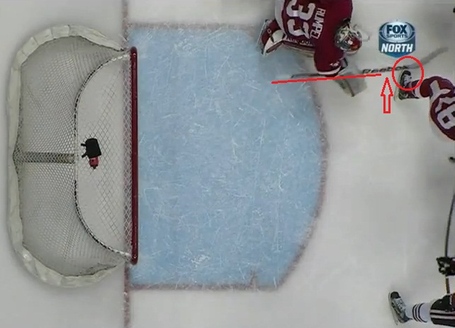 Part 4) The impact of the stick's collision with the skate is impeding Rumpel's ability to swing the blade, but his momentum is still carrying him to his right, which jars the stick loose even further as the butt-end of the stick continues on its course. 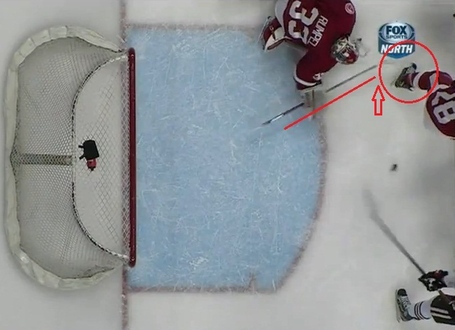 Part 5) The stick is now jarred from Rumpel's hands, as his momentum continues to carry the stick towards the puck. 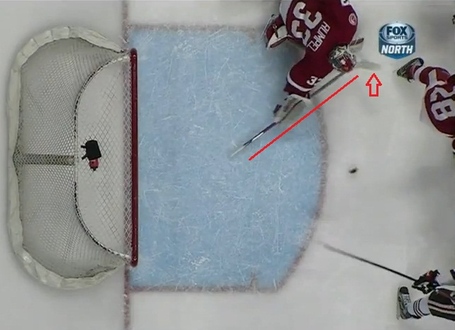 Part 6) Stick makes contact with the puck heading towards the goal as Rumpel attempts to regain his stick. 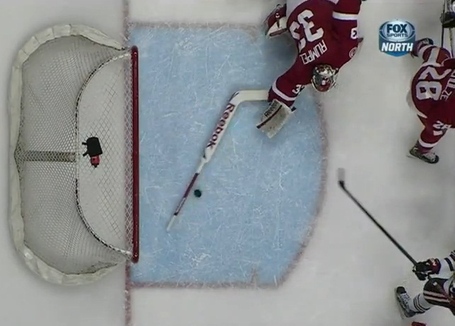 So clearly Rumpel's stick makes contact with Schulze's skate, taking it off its original course and jarring it from the hands of the Wisconsin goaltender. In an incredibly lucky twist, the loose stick happens to go on the same course as the puck, keeping it out of the net.

2013 NCAA Hockey Tournament: No. 4 Wisconsin Falls to UMass-Lowell in 1st Round