Wisconsin never settled into a groove on the offensive end, but a similarly poor beginning from Ole Miss kept the Badgers in decent position -- until Marshall Henderson and the Rebels heated up over the last 10 minutes.

Wisconsin entered the 2013 NCAA tournament confident it could build off a strong Big Ten Tournament showing for a deep March run. But against the No. 12 seed Ole Miss Rebels in the West Region, the No. 5 seed Badgers were plagued by a careless, inefficient offense that was unable to sustain Ole Miss' late push. Wisconsin shot just 25.4 percent from the field and was held without a field goal for the final three minutes ff the 57-46 loss at the Sprint Center in Kansas City, Mo.

Ole Miss advances to the Round of 32 and will face the winner of No. 4 Kansas St. and No. 13 La Salle. Wisconsin, meanwhile, has its season end despite a strong showing in last weekend's Big Ten Tournament. The loss was the Badgers' first opening-game exit in the NCAA tournament since 2006, and just the second one-and-done in coach Bo Ryan's 12 seasons at UW.

Wisconsin led by as many as six multiple times, but the Badgers were sloppy from the start and closed the first half with an uncharacteristic eight turnovers. UW entered the day averaging just 9.8 turnovers per game, but nevertheless managed to carry a 25-22 lead into halftime. That also came thanks to an Ole Miss offense that shot almost just as poorly in the first half (31.3 percent to Wisconsin's 30.4), but attempted nine more shots. And while the Badgers had been so reckless with the ball, the Rebels managed just four points off those eight turnovers. Comparatively, Wisconsin produced seven points off Ole Miss' five first-half turnovers.

Perhaps most glaringly, Wisconsin's lead was still slim despite a horrid shooting effort from Ole Miss' top scorer, Marshall Henderson. The volatile, explosive junior guard leads the Rebels with 20.1 points per game, but shoots just 38.5 percent from the floor. A volume-shooter in the truest sense, Henderson was at his worst in the first half before erupting in the second half to finish with a game-high 19 points on 6-of-21 shooting (3-of-12 from 3-point range). 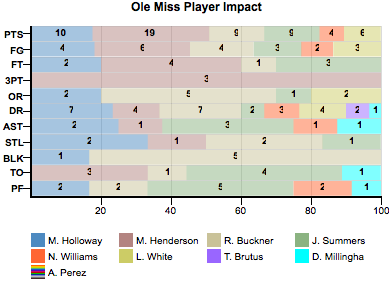 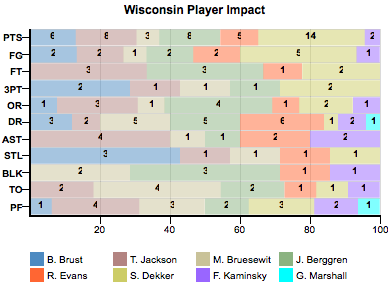 A 9-0 run for the Rebels extended into 8:35 mark in the second half and gave them a lead they never relinquished.

Wisconsin's frontcourt especially struggled in this one. Senior center Jared Berggren needed a 2-of-10 shooting effort to reach eight points, though he did add nine rebounds and three points. Senior forward Mike Bruesewitz scored only three points and added six rebounds, and his four turnovers -- all in the first half -- were especially critical. Senior -- notice a trend? -- forward Ryan Evans struggled with his jumper, going 2-for-8 en route to five points and seven rebounds.

The lone bright spot -- offensively, at least -- was freshman guard Sam Dekker, who put on a solid show on the greatest stage of his young career. Likely a big part of Wisconsin's immediate future, Dekker scored a team-high 14 points on 5-of-13 shooting, though he did struggle in going 2-of-10 from 3-point range.