The future Badger and a current UW target both won state championships at the Kohl Center over the weekend.

Don't look too far past this year as Wisconsin still has some more business to attend to, but take just a second to think about the future of Badger basketball.

Coach Bo Ryan's recruiting class that will come in next year has been highly regarded for some time now with prized recruit Bronson Koenig as the headliner.

Koenig won a state championship for La Crosse Aquinas on Saturday at the Kohl Center. He tallied 16 points and five assists as the Blugolds (24-4) withstood a late rally from Lodi (24-4) to win their second state championship in the past three years. B5Q was in attendance to scout Koenig's final high school game and here is what we saw:

His game is "smooth," personified. He was in complete command of his team at all times and could get whatever he wanted on the offensive end.

In fact, Koenig has a pro-style game when the ball is in his hands. He took ball screens from the top of the key on just about every possession for Aquinas and his decision-making coming off those screens was spectacular. He had a great feel and knack for look-away pocket passes to the rolling big man and knocked down multiple mid-range jumpers. We only noticed one weakness in his pick-and-roll game: he showed his hand too early. You could tell when either a pass or pull-up jumper was coming as the play was developing and he rarely turned the corner. All in all though, that's a minute problem to have and the Wisconsin coaching staff should be able to correct that quickly.

You can tell that Koenig is a kid that lives and breathes basketball by the way he plays. He has textbook form and great elevation on his jump shot, and he has already developed his own go-to move: a beautiful crossover dribble and pull-up jumper from the elbow area. Koenig did, however, fall in love with that mid-range game a little too much in the second half and stopped trying to get all the way to the rim. On a day when he struggled shooting from the field (6-of-18), Koenig should have tried attacking and getting himself to the foul line, but he should learn that in time. Overall, his court awareness and feel for the game were exceptional -- he just needs a little fine-tuning of the details once he steps on campus. Below is a shot chart from his performance on Saturday: 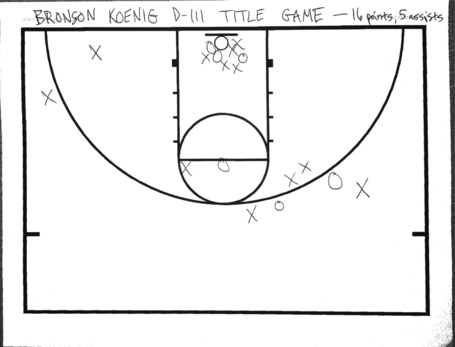 Next year's stable of guards might just be the best Ryan has ever assembled in his time at UW. Traevon Jackson, Ben Brust, Josh Gasser, George Marshall and Koenig -- that has to have Badger Nation beyond fired up. Koenig will need time to develop defensively in the way that the coaching staff wants, but offensively he probably has the most complete game of all those guards right now. Expect him to step in and play substantial minutes as the first or second guy off the bench once he officially suits it up in the cardinal and white.

Stone wins a second championship, too

A Wisconsin recruiting target was also playing for a state title on Saturday at the Kohl Center. Sophomore Diamond Stone poured in 22 points and added 16 rebounds as his Whitefish Bay Dominican Knights repeated as Division Four champions.

Stone wouldn't be a Badger until the 2015-'16 season, but the possibility of him rocking the Motion "W" is intriguing nonetheless. He's currently ranked as the No. 2 player in the country, according to the ESPN 25, and Ryan has already extended him a scholarship offer. He'll be a tough grab for UW as his offers list includes the likes of Florida, Indiana, Georgetown and many other top-flight programs.

What really stood out about Stone's performance against Auburndale in the final was his excellent touch around the bucket. Rarely do you see a 16-year-old with the soft hands that he has already developed.

He's a good, not great athlete, but give him time to further grow into his body and it's likely his athleticism will jump to another level. He threw down one ferocious alley-oop in the second half but aside from that, his athleticism didn't jump off the page.

If Stone's going to be a Badger at some point in the future, he'll really need to improve on the defensive side. For being 6-foot-10, Stone didn't show great shot-blocking prowess. He had a couple blocks due solely to that height, but for the most part he just altered shots. As the second half wore on, you could tell that Stone was winded and that showed in his defense. He was late rotating on multiple possessions and that prevented him from adding to his blocks total. Better conditioning will come with age and that will help him in all areas of his game.

The talent is there for Stone to remain as one of the top players in the country by the time he will be signing a letter of intent. Let's just hope Ryan is the coach who gets the coveted call because Stone has the potential to be a program-changing get for Wisconsin.