A Tank at a fork in the road: Frank Kaminsky has arrived

Frank Kaminsky set a new Wisconsin single-game scoring record. Now he has a legacy to build.

Share All sharing options for: A Tank at a fork in the road: Frank Kaminsky has arrived

The Kohl Center crowd was electric Tuesday night, no doubt intoxicated by the onslaught of points being scored in the building. Junior forward Frank Kaminsky was the primary recipient of the cheers, serenaded by shouts of "FRANK! THE! TANK!" as he appeared to score effortlessly toward a new Wisconsin standard for most points (43) in a single game.

Without Kaminsky's sterling 16-of-19 shooting performance, Wisconsin's exciting 103-85 win over North Dakota would not have been possible.

Now the question is, which way will Kaminsky break? What does he do for an encore?

Instead of being "just" a part of a well-balanced scoring attack in yet another NCAA tournament season at Wisconsin, Kaminsky will be mentioned any time another Badger gets hot and scores 30-plus points in a game, threatening to make a run at one of the program's most hallowed records.

Furthermore, it's not too often that a Badger basketball player starts trending worldwide on Twitter, but last night it did. And national hoops columnists don't always burn rubber to their keyboards to type up a story about a career 3.7 points-per-game scorer so they aren't left behind ... but last night they did. 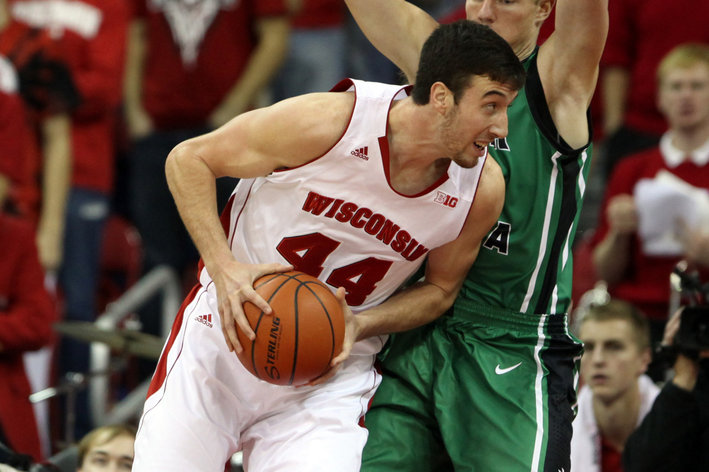 We didn't know if Frank Kaminsky's name would ever be mentioned in the same breath as Badger greats like Devin Harris and Alando Tucker. Now, we have no choice.

Ultimately, Kaminsky's name will be atop some plaque inside the men's basketball facilities for future players to see and strive to reach, for as long as the record stands ... which as we've learned, could be a while.

Back in 1965, Ken Barnes scored 42 points and hauled in 23 rebounds in UW's 92-73 loss to Indiana. No Badger has had a game like that since. Such lofty rebounding totals have long since disappeared from the game, ensuring Barnes' place in UW history. Even his scoring feat stood alone for almost 30 full years, until the legendary Michael Finley tied the mark in December of 1994 -- again in a loss -- on the road at Eastern Michigan as a senior.

The legacies of the two players who previously shared UW's scoring record couldn't be much farther apart though.

Finley was a four-time All-Big Ten honoree who helped usher in the modern Badger basketball tradition. He was a Playboy All-American, Team USA bronze medalist, 1st round NBA Draft pick and eventual world champion with the San Antonio Spurs. Finley's piece of the record was a logical step for the man who would leave Wisconsin as its all-time leading scorer the next spring.

At 6'2", Barnes was a starter for two seasons on some of John Erickson's worst teams at Wisconsin, averaging less than 10 ppg in a higher-scoring era. If you'd have asked die hard Badger fans a week ago who held the single-game scoring record, you likely would have heard replies of Finley, Tucker, Danny Jones, or Ricky Olson.

Barnes, who died in 2011, has nearly been forgotten 50 years after reaching his basketball pinnacle.

After setting the initial record, Barnes finished up what was a solid junior season for Wisconsin, leading the team in rebounds (8.8 per game) and free throw percentage (.738). The Baltimore Bullets drafted Barnes in the 16th round (pick #109) of the 1966 NBA Draft, in a time when teams drafted until they didn't want or need any more players.

Fast forward to Kaminsky. The seven-footer broke Barnes' and Finley's mark with a nice shot fake, drive and lay-in with 1:14 left in the North Dakota game. Unlike either of his predecessors, however, Kaminsky led his team to a win in the process. That fact alone hints at the transformation of Badger basketball in the last 25 years.

Because of that transformation, Kaminsky grabbed some of the national spotlight for Wisconsin on Tuesday. Though a lot has been made of how Kaminsky "came out of nowhere" to accomplish something so significant (sure, maybe there was something magical about last night), there were signs of Kaminsky's potential before this.

As a true freshman, Kaminsky played in 35 of 36 games for a 26-win team. Last season, Kaminsky posted the highest offensive rating of any Badger, thanks to high assist and free throw rates and his good shooting percentages across the board. He also showed flashes of brilliance. Like the 19 points in 23 minutes against Illinois and 16 points on 4-for-4 three-point shooting versus Samford.

Kaminsky's sophomore numbers were similar, if not more impressive than those of Jared Berggren and Keaton Nankivil at the same stage.

Now a guy who never came close to scoring in double-digits in back-to-back games has followed up 16 with 43.

Reminding myself that Kaminsky was abusing North Dakota, and therefore, I shouldn't get too worked up over this record does not take away from it at all. Kaminsky gained a lot of confidence on Tuesday. He's gotten exponentially better every week. That will pay dividends for Wisconsin.

For the rest of the year, Kaminsky will be scouted and known to opposing teams as the guy who scored 43 points (or "Tank the Destroyer" ... their pick). Which is fine, because we have already seen he can shoot, pass, dribble and work in the post on offense and block shots on defense. In his third season, Kaminsky knows he can do these things, and now he knows he can do them really well.

Is Frank Kaminsky the next Michael Finley? No, he's not. Is he like Ken Barnes? I doubt it. Berggren or Nankivil? Only Kaminsky can decide.

I really don't know where this is leading. But I'm hopeful that Kaminsky wants to be great.