On the third anniversary of one of the most memorable events in recent Wisconsin history, we break down David Gilreath's kickoff return touchdown vs. Ohio State with the help of former Badgers fullback and current Atlanta Falcon Bradie Ewing.

There are few plays in a football season that can justifiably carry the "season-defining" moniker.

Offenses in college football can run between 50 and 80 plays per game, and each one contributes to the successes or failure of the team throughout a high-contested game. One throw, one run, one tackle or fumble can change a game.

But a season? David Gilreath's 97-yard kickoff return against Ohio State on Oct. 16, 2010, redefined the Wisconsin Badgers' season, and not only set the tone for the UW's 31-18 upset win over the No. 1 team in the country, but paved the way to the first of three consecutive Big Ten championships.

So how did Gilreath break this season-changer? A combination of great blocking, miscues on the Buckeyes' return game and the breakaway speed of the dangerous wide receiver broke open the flood gates. With the help of ex-Badger and current Atlanta Falcons fullback Bradie Ewing, the lead blocker on the return, let's break down a moment that has already cemented its presence in Wisconsin lore.

Leading up to the game

The 2010 season unfolded with a successful, yet shaky start. The Badgers opened 5-1, but not without some close encounters. A Shelton Johnson tackle at the end of the first half vs. Arizona Stated saved a would-be Sun Devils kickoff return for a touchdown in a 20-19 win at Camp Randall Stadium.

Following a tough loss at Michigan State the week earlier, Wisconsin rebounded with a homecoming win and retained Paul Bunyan's Axe against Minnesota in a 41-23 romp, albeit with some controversy. Head coach Bret Bielema went for a two-point conversion when up 41-16 midway through the fourth quarter, drawing scrutiny from media pundits for not only the decision, but also his reasoning behind it. 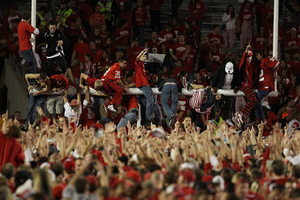 B5Q founder Adam Hoge went big with this one, caps-locking the headline and taking a personal route in his recap of Wisconsin's 31-18 win.

But the week leading up to facing quarterback Terrelle Pryor and the Buckeyes was different, a new week that had a different energy than most game weeks. A buzz and heightened anticipation for the game was evident throughout campus for its team ranked No. 16 in the nation. ESPN announced its famous College Gameday show was coming to Madison for the first time in years. Ewing remembers it all quite fondly.

"The atmosphere just building up there, even in class, the students just had a different pep about them, and different hype about them," Ewing said. "That was the talk of the entire week."

The build-up to the game fostered that special quality one sees only in these historic games. It also could have served as a double-edged sword, had the off-field momentum not matched the on-field proceedings.

"There was a lot of build-up, and to come out, a lot of times when you have that build-up you can have that let down, too, at the beginning of the game because there's so much build-up," Ewing said. "But to come out at the very first play of the game and return the opening kickoff and to be a part of that with David Gilreath, amongst other people, was just insane."

Success in special teams can be attributed to having the right talent on the field, but it's mostly in the film study sessions where only a handful of plays can be the deciding factor in a close game. Special teams coaches will study every second of film to key in on any frequent tendencies players show. For kickoff returns, a defender's undisciplined lane coverage, among other factors, will help determine the game plan for that Saturday.

"So if they bring their coverage unit down the field and they have a tendency to twist, do like a 4-5 twist, which would be the fourth man in and the fifth man in twisting as they run down the field, or if they could run a totally different stunt, we have a game plan for that."

Wisconsin had quite the film to pick on the Buckeyes' special teams. Coming into the game (and stated by ESPN during the broadcast), Ohio State's special teams had two field goals blocked (one returned for a touchdown), a punt blocked and both a kickoff return and punt return taken back for six points each. There would be opportunities in this game to produce a special moment, and it was up to the players to take the coaches' schemes and make plays.

"You get all that information on film throughout the week, and the coaches map up a great game plan to attack that scheme, and that's what they did that week," Ewing said.

"And then it takes some good luck as well, and some good execution."

The Buckeyes line up with five defenders to the left and right of their kicker, with the ball just a hint to the right of the middle of the field as he kicks off. Wisconsin employed six players up near midfield, and they dropped back to engage their opponents between Wisconsin's own 25- and 35-yard line, with three at the second level hustling back and organizing near the 20. Ewing watches from the 8 as Gilreath catches the ball at the 3 and begins his sprint upfield.

Wisconsin ran a certain type of blocking scheme for these returns, one that paid dividends that October night.

"I don't exactly remember the call, but to have the opportunity, I'm sure there was a double team there at the point of attack, and then possibly a trap block, and I usually led up in the double-team trap block, and usually the kick returner follows me." 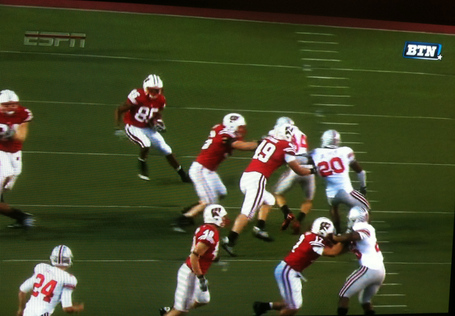 Tight end Lance Kendricks (No. 84) comes from his position at the left side of the second level of blockers and crosses over to the right. Meanwhile, the tandem of linebacker Ethan Armstrong (No. 36) and tight end Brian Wozniak (then No. 49) forms a double-team on the Buckeyes heading towards Gilreath's left. Although the two siphoned off of each other to take out individual defenders past the 20, they came across the left along the same principle which Ewing referenced above.

Defensive end David Gilbert (not pictured) makes a key block on defensive lineman Jonathan Newsome to Gilreath's right. Note how No. 20 in the picture above gets out of position with his lane assignment. He should be right in Gilreath's path but allows himself to be taken out of the play by Wozniak's block and cannot get back to his proper lane. This opens a lane for Ewing to run through and have a one-on-one showdown with the kicker, then-freshman Drew Basil, for Gilreath's path to the end zone. 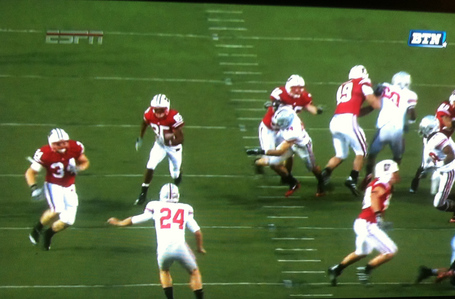 As the video above shows, Ewing steamrolls Basil as Gilreath jets off for the first score of the game 12 seconds into the opening quarter, not letting a defender get within 5 yards of him.

"In that game, everything worked perfect, everyone kind of executed their block, and you saw the final result," Ewing said.

Wisconsin scored the first 21 points of the game en route to a 21-3 halftime lead, then held on with 10 unanswered points to seal the victory. Running back John Clay ran for 104 yards and two touchdowns to help drive an offense to 184 yards on the ground, but it was Gilreath, who accumulated 194 all-purpose yards in that game, and his opening score that sparked the team and the rabid sellout crowd that Saturday night to one of the most memorable wins in program history.

It's a game, a moment and a crowd Ewing says he'll never forget.

"Probably the loudest I've heard Camp Randall was after Gilreath scored that touchdown in my whole career, I would think.

"It was just unbelievable, so it gives me goosebumps thinking about it right now. That was pretty awesome."