Thank the good lord above that conference season is finally here. I for one believe coach BB when he claims it was one of the toughest non-conference slates the Badgers have faced in a while. Seriously, do you have any idea how difficult it is to gather material to make fun of Utah State?

But we now get to spit venom at our most loathed family members. It’s worth noting that the majority of these pot-shots will not be new takes, but simply reinforcing stereotypes and making crude jokes about player arrest records and coaches' wives.

So on to Nebraska, where the pace of life moves fast...

Your Tradition Died With The Triple Option 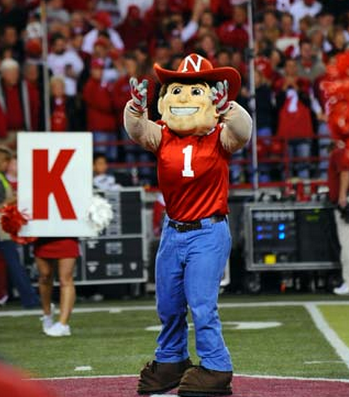 What do Lawrence Phillips, Mike Rozier, Irving Fryar all have in common other than being massive NFL busts and chemically imbalanced morons? (The final word should give you your hint).

Yes, for all the glory years before Nebraska was allowed in the Big 12, Lincoln was a safe haven for all academic partial and non-qualifiers. Have a pulse? Can’t spell? Coach Tom Osborne has a class schedule for you! Once Nebraska had to join the Big XII, they’ve basically been, well, Wisconsin. Not bad, but certainly not elite.

It all goes to the fact that Nebraska as a football "powerhouse" in the modern era is on a fragile foundation. Much like Penn State in 1990, Nebraska is under the impression that they will dominate the Big Ten, which they will most certainly not.

Is it nice to have Nebraska in the conference? Meh, sure? Would Missouri have been a much better academic fit? Yes, by a long shot.

"The Best Fans in College Football"

Don’t give me this shit about being polite, knowledgeable and agreeable fans. Cheering and respecting your OPPONENT is for piss poor individuals that don’t relish competition. Oh, you don’t boo your team when they are getting whipped? Then you are mentally feeble fan that does not expect excellence. I’ll gladly boo Bretty B if we are not performing. How you guys haven't run Pelini out of town is beyond me.

Last year in Madison, I had three run-ins with chump Nebraska fans either talking shit about football, littering or telling us how Lincoln is superior to Madison. I’m not going to lie -- it felt good. It got me hyped-up and stoked for the big game. Screw me? No, screw YOU!

But wouldn’t you know it, seconds after each altercation, I was approached by g’damn Joe and Mary Omaha pleading with me that "we’re not like that -- those guys don’t represent us." Like hell they don’t! This isn’t family -- it’s football -- it’s us versus you -- and when it comes to a fight, I'm picking my side of the Big Red every damn time.

Between being known as courteous or crude, give me the latter. The image I want to portray is nothing short of "When Bucky comes to town, lockup the liquor cabinets and make sure the police is on notice." I want our fan base to be known as the beer swilling, foul mouthed, fuck-you-eat-shit rascals that can give English Premiership supporters a run.