Hell, at this point, it’s got to be more fun to poke fun at the Badgers than our opponent – right? From a quarterback "competition" that’s a race to the bottom to the return of the listless Beliema camera shots and wondering if Matt Canada is calling plays drunk, we’ll have plenty of time for self-deprecating laughs this season.

A Coach of Destiny!

Oh baby, this story has certainly aged well. The hot-shot Xs and Os coach from the Pac-10 heads down to redneck central and gets bamboozled by a past-her-prime stripper named Destiny that looks like she polishes off two packs of Parliaments a day. From the caller response of "Roll Tide" – "It’s Rolling Baby!" – no UTEP game is complete without More Good Times Price being mentioned. 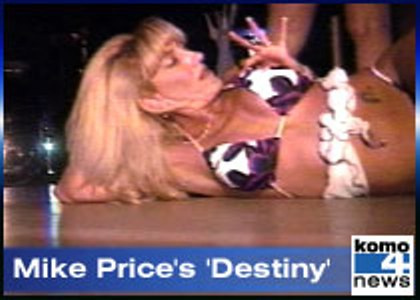 Coaching big time college football does not have a second act (Hi George O’Leary!). After being the hottest coach in the country, Price now finds himself in a dead-end program because. (Hopefully a certain coach with the same initials as Bob Barker is taking note).

But don’t think for one second Señor Price’s party habits have slowed down one bit while living on the real-life set of "From Dusk Till Dawn." That kind of reckless awesomeness is a gene you can’t get rid off. He’s a tragic figure of good times on the Redneck Riviera.

Or, well, maybe not. Because, sigh, none of it was fucking true.

Please, no more mentions during the tournament and no more documentaries or awful movies.

Much like Ken Burns with Negro Leagues or Dick Ebersol with Jessie Owens in the Olympics, it’s maddening the utter sappiness and wax-nostalgic way the media portrays this team.

Listen gang, we get it – they were a special team, Adolph Rupp was a jackass bigot and good triumphed over evil. Stop shoving it down our throats. Hell, the only person from that fateful day to actually make something of himself in the game of basketball was Pat Riley. And since then, the only UTEP player of note is noted homophobe Tim Hardaway. Tell’em what you think Mr. Miner!

Maybe it’s just our core Midwestern values, but if there is going to be sexy time at Camp Randall, Badger supporters prefers the Port-O-Johns. We’re a discreet fan base.

I know it’s easy to pile on El Paso, what with the crime rates, cartels and general malaise of the population. But seriously, have you ever actually stepped foot there? It’s a crumbling metropolis full of litter, drugs and cheap plastic bottle tequila.

I attended the 2000 Sun Bowl, and much like agent Hank Schrader, I left with a bruised mind and soul.