If you look at the Jeff Sagarin computer rankings, the Badgers sit in 25th place. Sagarin produces two sets of ratings: the Elo rater, which doesn't account for margin of victory and is used in the BCS system, and the Predictor, which takes into account margin of victory and is better at, well, predicting. The overall rankings are an average of the two.

The Badgers rank 19th in the Elo Ratings and 27th in the Predictor, mostly thanks to a schedule that looks significantly better by the numbers than it does by names -- Utah State sits 51st, Oregon State 41st and Northern Iowa 84th, well ahead of a number of FBS teams (124 FBS teams, 246 including FCS).

I think, regardless of your statistical leanings and knowledge, everybody understands why Wisconsin is lower in the Predictor.

When I first thought up the color scheme for my drive charts I figured this year would offer something a bit less drab. Thanks to the inverse qualities of the Badgers' offense and defense, we are once again left with a lot of gray:

Let's take a look at what we can learn from the Badgers' two scoring drives.

This one was most reminiscent of the Northern Iowa game, the one in which the Badgers offense looked at least something resembling competent. The Badgers weren't able to get explosive plays -- nothing beyond 20 yards -- but they pushed the ball up the field with short-to-medium passes and moderate runs. The drive featured passing plays of 12, 19, and 17 yards as well as a seven-yard run to get the team into field goal range.

But then, the stall. For the game, the Badgers posted a success rate of 32.3% lower than New Mexico State's nation-worst 33% mark last season. It's their second straight week hovering around the 33% mark. If you want to see the real problem, just look at how the Badgers performed on downs when they needed four yards or less: 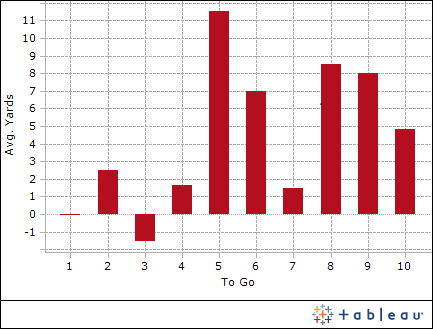 The Badgers were able to get yards when Utah State was forced to defend a first down marker five yards or farther from the line of scrimmage. As soon as the first down marker tightened up to the line of scrimmage, so did the Aggies defense. Most notably, the Badgers averaged 0.0 yards on four attempts at 3rd-and-1, succeeding just once. Unacceptable, and offense-killing. In the case of the fourth drive, it was a no-gain on 3rd-and-2 that squelched the drive and forced the field goal.

Remember this? The Badgers fed Montee Ball six times. He ran for 42 yards, including pickups of 11 and 17, and lumbered into the end zone without the Badgers even attempting a dropback. This was a guy who was supposed to be a Heisman candidate carrying the team on his back and dominating a defense. Will we see it on a week-in, week-out basis like we did back in 2011? Unless this line figures something out, almost certainly not. But it's a great sign to see that Ball is still capable of such feats.

The defense, on the other hand, continues to play impressively. Utah State entered Saturday's game with a 47.3% success rate and scoring 0.38 points per play, 34th and 42nd in the nation respectively. Outside of an early touchdown given up on a big play and a 24-yard drive thanks to a Badger turnover, the Wisconsin defense shut down the Utah State offense with regularity.

The Aggies ended the game with a 32.9% success rate. They ran 72 total plays, coming out to just 0.19 points per play. Now, the Badgers should easily be the best team on the Aggies' schedule so far, so maybe it shouldn't be surprising, but if this year has taught us anything so far, it's to stop making such assumptions. And the Badgers had undue struggles with a number of awful offenses last season. Illinois put up their fourth-highest conference yards per play against the Badgers last season. UNLV managed a success rate over 40%. Bad things happened, disguised by the all-around-assault offense.

Now, at least record-wise, the defense is disguising the offense. Weird. But according to the Fremau Efficiency Ratings hosted on Football Outsiders, it's the truth: the offense ranks 117th of 124 teams. The defense ranks 23rd. And that's all without forcing a single turnover, something we should expect to change eventually (hopefully?).

Individually, there isn't much to say. Danny O'Brien was fine through the field goal drive, but collapsed afterwards, ending with his fumble towards the end of the first half. Joel Stave didn't do anything worth mentioning.

Montee Ball ran for 137 yards but needed 39 carries, 3.8 yards per. Like with most athletes, his efficiency decreases with increased usage. The atrocious offensive line certainly isn't helping anything, and his personal touchdown drive should be greatly credited for the Badgers' victory. As mentioned above, at least there was a whiff of that Heisman talent left on the field. But he managed just a 31.2% success rate, with many of those failures coming on the 3rd-and-1s and 3rd-and-2s that ended drive after drive. Is short yardage on the back? On the offensive line? Both? Regardless of what you think or even regardless of what the truth is, it's an issue that must be fixed for the Badgers to score enough to compete with better teams.

Thanks to Kenzel Doe's massive punt return and John Thompson's whiff, we can say the Badgers won the special teams game, but Kyle French is leaving much to be desired. There was hardly fanfare over Philip Welch's phenomenal extra-point kicking when he was at Wisconsin, but wouldn't we want to have his 207-for-211 (98%) accuracy back? French is 30-for-33 on his young career, a 90% mark that might make some high-school kickers blush.

At the end of the day, I don't think we learned much from this game. Danny O'Brien still looks lost. The offensive line still looks lost. Montee Ball can do things, but not without some help from his offense. The defense looks pretty good, maybe even very good. A fast guy running back a punt made a huge difference. These are, for now, your Wisconsin Badgers. There is plenty of time for a young team and an inexperienced coaching staff to grown, but for now we're left hoping for something to materialize on offense and for the defense to just hold on for dear life.