Share All sharing options for: Film Study: Early Minutes of Stanford vs. UCLA

Did you miss me readers? Probably not. First order of business: let me formally apologize for my prolonged absence from the page. Sickness/finals/The Badger Herald/football & basketball beat coverage ended up consuming my soul, but I'm eager to win back your hearts and minds by offering a little bit of insight into the Stanford matchup.

And if this isn't enough, well just send me your address and I'll send you a gift basket or something. Or maybe the Badgers will win the Rose Bowl. That would top any gift I could give you.

So, no gift baskets.....sorry I got off topic there. The coffee at the media hotel in LA is free and I've been overindulging that privilege.

The first thing that jumped out at me when watching the initial minutes of the Pac-12 Championship game was the aggressiveness of UCLA attacking the edge. Almost eight straight plays were either jet sweeps or wheel routes to the outside. Why? UCLA knows Stanford has the best running defense in the country, and that success comes from its front seven. With all the strength of the 3-4 lying in the middle, UCLA scored its first touchdown of the game on a run up the middle.

How was this run possible against the nations best defense? Simple. The Bruins set up the Cardinal with their focus to the outside. With the Stanford corners struggling to get off blocks on the outside edge, receivers and running backs like Johnathan Franklin set the tone early picking up several first downs. Then, when the Cardinal shifted its attention with linebacker/safety help shifted to the outside (something that was observed pre-snap) Bruins' offensive coordinator Noel Mazzone dialed up a simple delayed draw up the middle to Franklin, and with some terrific execution from the offensive line and a missed tackle, Franklin burst up the middle for an easy score.

Here are a few frames of one of the opening plays that led to the first score. 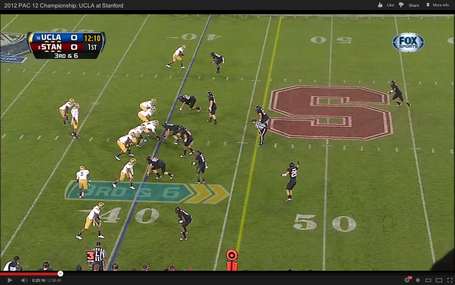 Stanford likes to mix up their looks and sometimes drops a middle linebacker out of the 3-4 into coverage, sort of like a bandit. For anyone unfamiliar with the term (and I haven't heard it used since my high school football days), a bandit is a hybrid linebacker/safety in a 3-3 formation, fitting the initial set we have here from the Cardinal.

UCLA opens in a trips right, split left, out of the shotgun. Bringing the offset receiver in motion helps give the Bruins an idea of whether the Cardinal is in zone or man or to perhaps force an adjustment/mismatch. 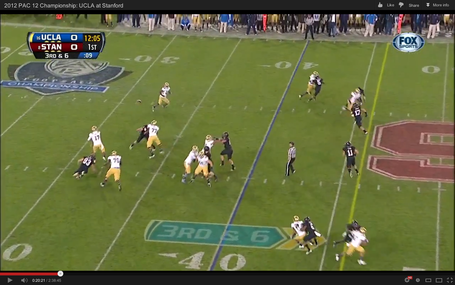 Stanford rushes four and drops into what looks like a man cover-2, so UCLA quarterback Brett Hundley checks down quickly to Franklin in the flat. Since Stanford brought up a safety to cover the receiver in motion and no open receivers elects to give his running back the ball in space. 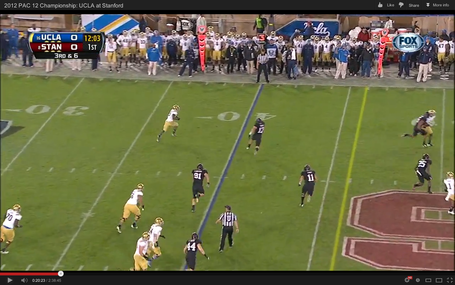 Franklin was a Doak Walker finalist as well, and with the struggles he endured getting anything going between the tackles in the previous game with Stanford just six days before the Pac-12 Championship game, the team made the point of getting him the ball in open space. Now, just a single Cardinal defender remains for Franklin to beat for a first down. In open space with a talented back like Franklin, I'd take my chances.

Bets are the Badgers try the same. 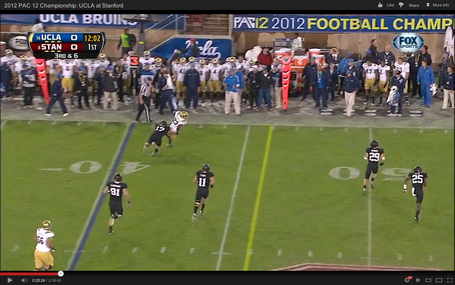 How do the rubber soles on his cleats taste? 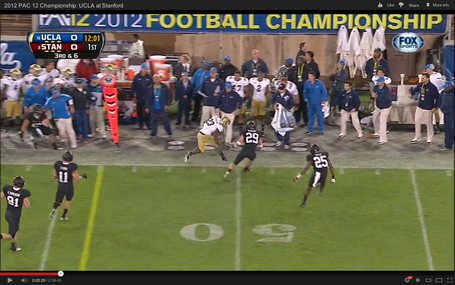 Big completion sets up the first down and has Stanford head coach David Shaw on alert that the focus and success of UCLA early has been to the outside of the field.

Now we turn to the score on the next play by Franklin. 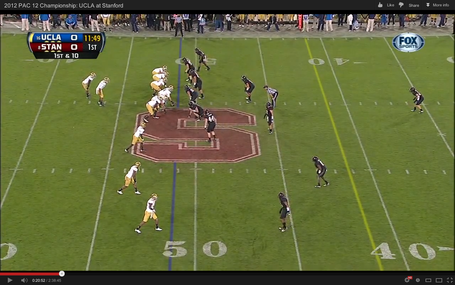 Stanford shows a stacked look on the line against UCLA's heavy right, trips right out of the shotgun. 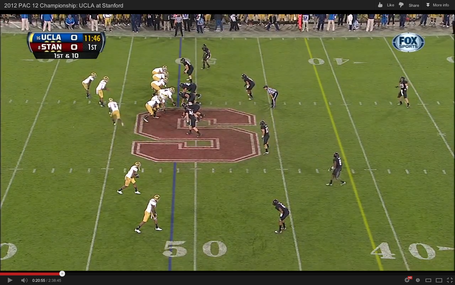 The Bruins bring motion left and the Cardinal has already seen enough in the opening series to know there is a high possibility the play will be either a jet sweep or a swing pass to the man in motion. So, the defense adjusts by bringing help to the left in accordance to the shift, freeing up the middle just a bit. 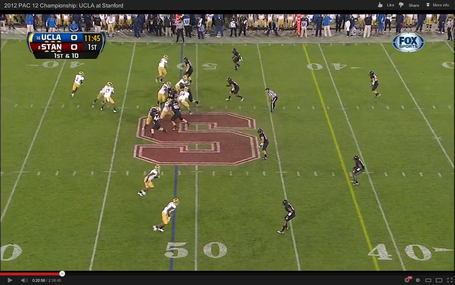 Nothing fancy here but a designed draw play to Franklin. Five Stanford players have eyes locked to the outside on the potential of an outside pass, making the offensive line's job a bit easier getting a solid block on the secondary level. 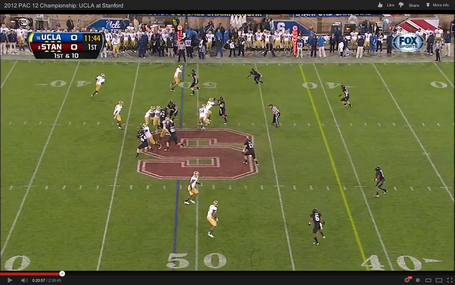 Like I said earlier, the offensive line does a great job reaching the outside linebacker, sealing him off to the draw up the middle to Franklin. 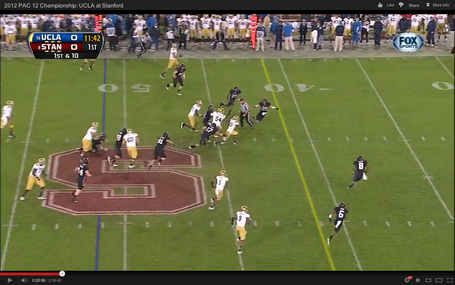 And suddenly, Franklin uses a burst of speed and a few broken tackles to get loose in the middle of Stanford's defense. 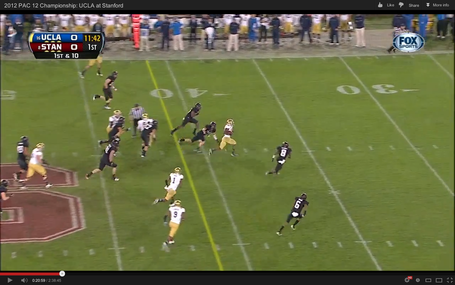 Because the outside help/contain men on the left side at the beginning of the play were so focused/committed to the idea of the play being to the outside with the use of motion, they're a half-step slower in their initial reactions, giving one of the nation's most talented backs all the room he needs to operate. 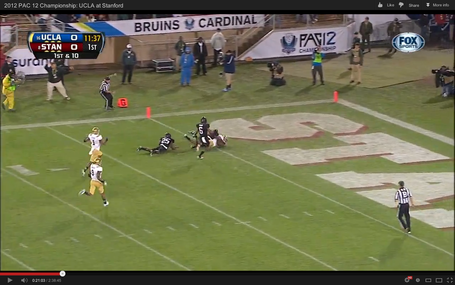 Touchdown UCLA. This formula of success early in this game was pretty simple. Attack Stanford's weakness on defense by running outside sweeps, swing passes and stretches to attack the cornerbacks (who struggled to get off blocks) and then, eventually, gash the middle.

Eventually Shaw and Stanford made a terrific halftime adjustment to turn the tide of the game but the fact remains this: Wisconsin has three ELITE running backs. I was stricken by how much Franklin reminded me of Ball in the overall balance of his running game. But Wisconsin has someone with better speed (Melvin Gordon) that can maybe beat anyone in the country to the outside. James White is that quick change-of-pace and solid No. 2 back, and there's a strong possibility Matt Canada will be extremely creative in his formations, finding ways to put all three in the game at the same time.

UCLA showed Stanford is beatable. Now it's up to Wisconsin's ground game to carry the team to its first Rose Bowl win since 2000 which was, ironically, with Barry Alvarez coaching against the Cardinal.