Breaking down the scoring plays of the Hoosiers' 24-21 victory over the Hawkeyes last Saturday.

Share All sharing options for: Film Study: Indiana vs. Iowa 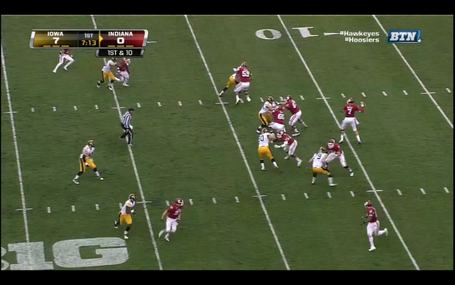 First off, I'd like to give my initial impressions after immersing myself in Indiana film for the past two days.

These guys aren't that good.

Sure, their offense (second-best in the conference) and passing attack are solid (statistically the best in the Big Ten at 299.9 yards per game), but the Hoosiers haven't beaten any solid competition in the conference yet this season. Unless you count wins over a horrendous Illinois team and a reeling Iowa group as quality wins, Wisconsin will have no problem handling Indiana in Bloomington come Saturday.

Sure, Hoosiers quarterback Cameron Coffman had a great day in last weekend's 24-21 win over Iowa, throwing for 315 yards and three touchdowns. But largely until the end of the first half, Coffman was sitting on the bench after being yanked by head coach Kevin Wilson. Coffman had also been yanked in Indiana's game against Illinois, as quarterback Nate Sudfeld (No. 7) took over duties against Iowa in the first quarter. But Sudfeld has a knack for making mistakes as well, throwing a pick-six to Iowa's Christian Kirksey (pictured below) during his first series replacing Coffman. 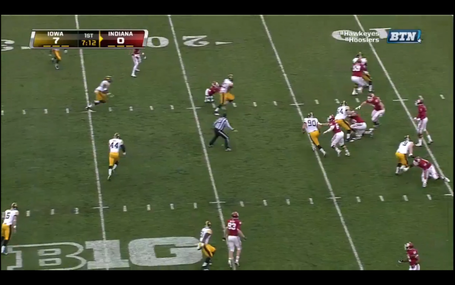 Kirksey just does a good job staying at home in coverage. While the quarterback does a good job looking off a bit to the left in the beginning of the play, Kirksey just jumps the route as soon as Sudfeld looks back right, resulting in an early 14-0 lead for Iowa. 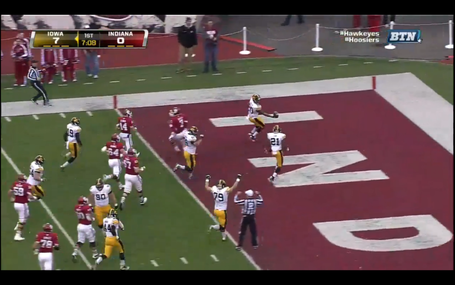 Indiana has experimented with both of its quarterbacks this season after losing stater Tre Roberson, although Coffman has thrown 249 passes this year compared to Sudfeld's 81. 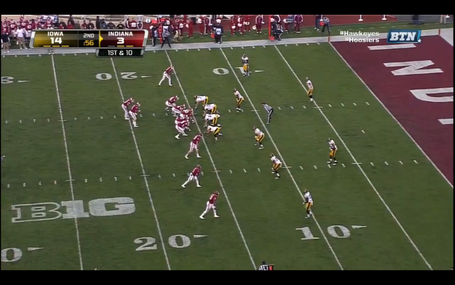 Under Wilson, the Hoosiers love to run a hurry-up spread offense based exclusively out of the shotgun. And, for the large part, it works. By controlling the pace of the game and keeping it up-tempo, spread passing attacks like this gas opposing defenses, as the mental toughness and conditioning of defenses are tested on long drives. Defenses can rarely get in substitutions for tired players, usually having to wait until they see the offense subbing to know they have a chance at doing so.

This is Indiana's first touchdown pass of the game. All three of Coffman's touchdown strikes came to standout sophomore wide receiver Cody Latimer, who keyed in on some slow-reacting Iowa safeties to find open space in the Hawkeyes' zone coverage.

Here's a basic formation Indiana runs out of. Four receivers on the field, heavy set trips right with Latimer isolated on the left. 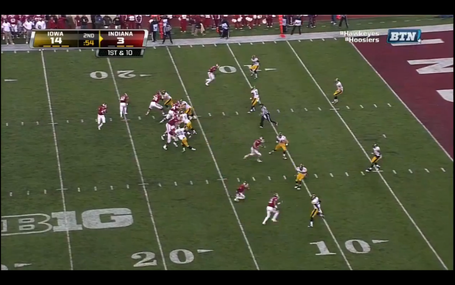 With two deep safeties but a heavy set of receivers to the right, Iowa has man coverage to the right and a linebacker also keying not only on Latimer, but also the left flat in case of a wheel route by the Indiana running back out of the backfield. 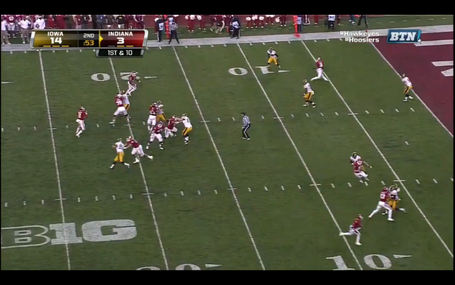 With Coffman looking at the running back first, he temporality freezes the left corner and the linebacker, as well as the deep safety, who is slow to react to Latimer slipping in between coverage. Whether this was a mental error or not is hard to tell. Most likely, the corner should have been playing underneath coverage on Latimer, adjusting to the depth of his route with safety help over the top. 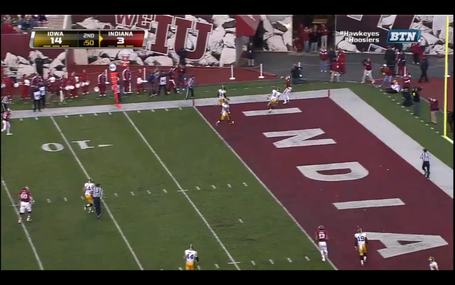 Whatever the case was, Latimer finds himself alone in the endzone and Coffman gets him the ball. The kid's just a sophomore, but he displays terrific knowledge of finding the gaps against soft-zone defenses. From what I saw as well, Indiana has no problem checking down to short screens to Latimer and others if they notice coverage is backed off at the line, something Wisconsin is notorious for doing (much to the fanbase's disgust). Wisconsin's Devin Smith, Marcus Cromartie and Darius Hilary all need to play fine games as corners for a defense that has, at times, struggled with its efficiency on pass defense. 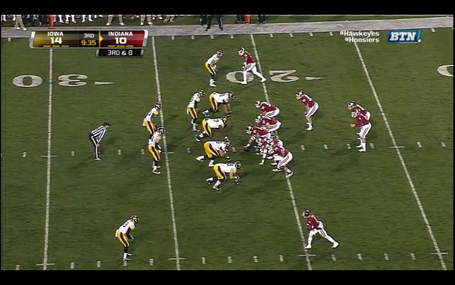 This play isn't that special in terms of X's and O's, but it does serve as a haunting reminder of Wisconsin's struggles on broken down plays last year. Somehow, Coffman manages to escape the pocket and the Iowa defense loses No. 13 Kofi Hughes from Indiana for a play that was originally ruled a touchdown but brought back to the 2-yard line. 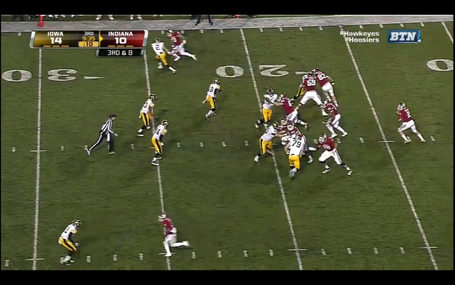 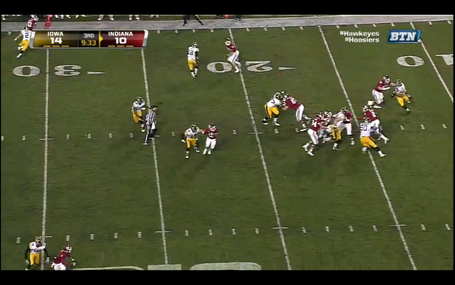 Also, I came away unimpressed with the play of Indiana's offensive line. When it came to long drop-back passes, Iowa almost always found a way to collapse the pocket. But what Iowa failed to do was wrap up, and multiple times Coffman got away -- sometimes even twice in a single play -- from a surefire sack, allowing the play or in many cases, the drive, to continue. 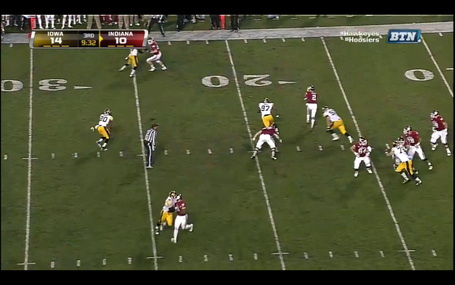 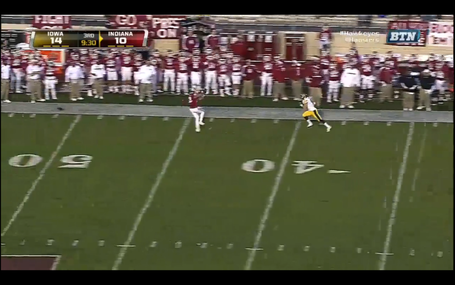 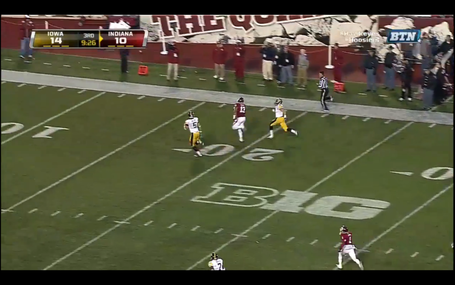 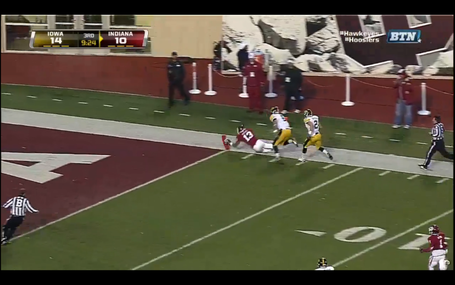 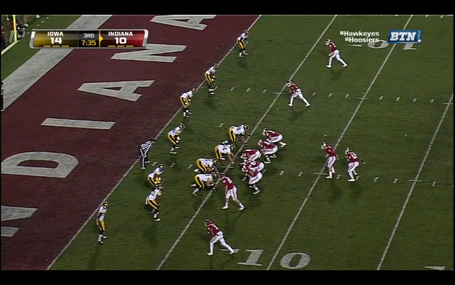 Four-receiver set, with running back Stephen Houston (No. 12) motioning out of the backfield to the right side. 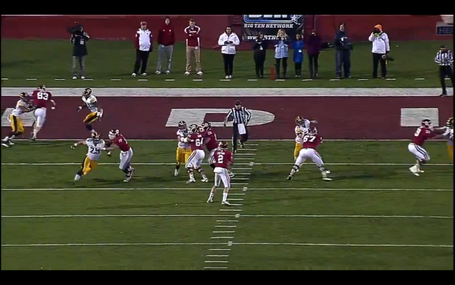 Indiana's big tight end, Ted Bolser (No. 83), performed a terrific double-move on this play, drawing in two players in Iowa's secondary, freeing up Latimer on a quick slant to the middle of the field. Because Bolser is 6-foot-6, Iowa paid special attention to him in the red zone. 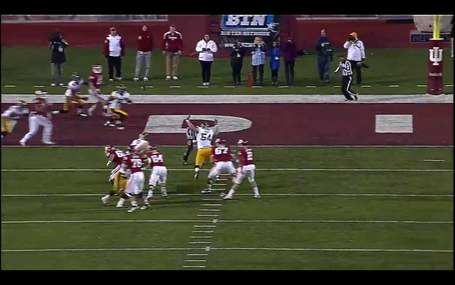 And the throws away... 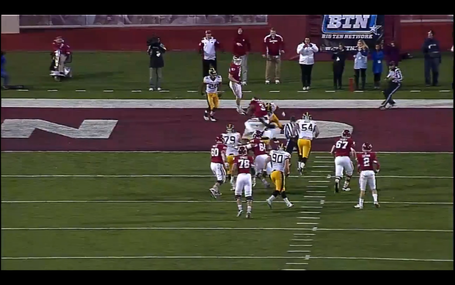 Touchdown No. 2 for Latimer. 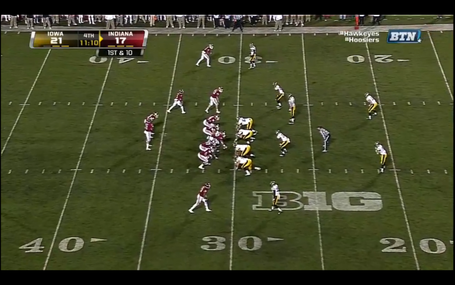 Now for touchdown No. 3. Sure, Iowa let Latimer get behind their safety ... AGAIN ... but Coffman throws one hell of a ball here. Probably the most impressive throw from Coffman on the day. Although I'm pretty surprised by his knack for making a poor decision or forcing a throw, he definitely has an arm that's capable of making defenses pay. 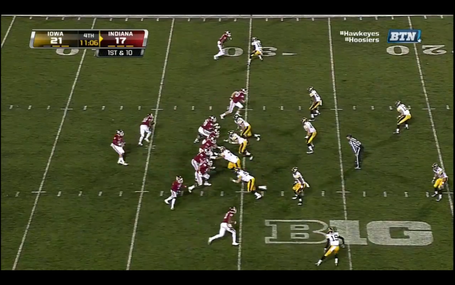 With Houston going out on a route as well, Indiana runs five receiving options out of this original four-wide set. 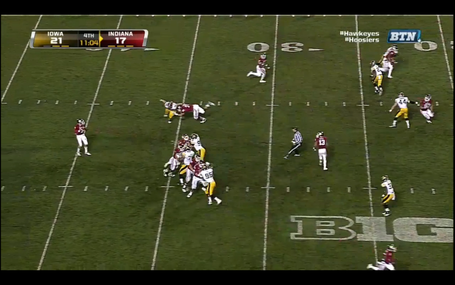 And, because Houston is wide open on his wheel route (and, coincidentally, the checkdown pass for Coffman) Iowa's linebackers panic and scramble to adjust. Coffman does a good job locking his eyes onto Houston, giving Latimer the second he needs to get past the Iowa safety. 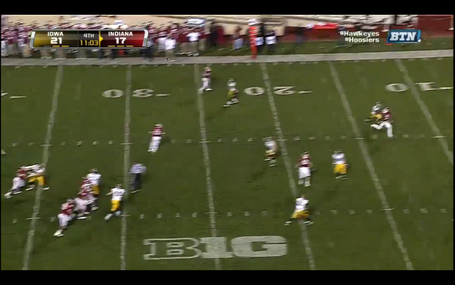 Ball's away. Look at that. You'd think, after the first two catches, Iowa would never have allowed Latimer in a situation where he'd be only covered by one man. Even though he only has a step or two, this throw and catch is pretty incredible. 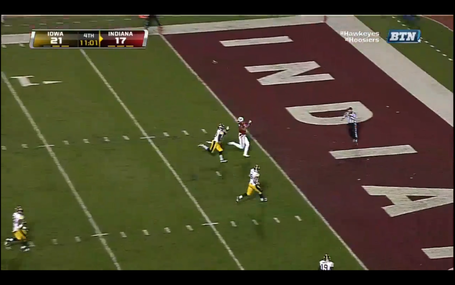 Look at that adjustment... 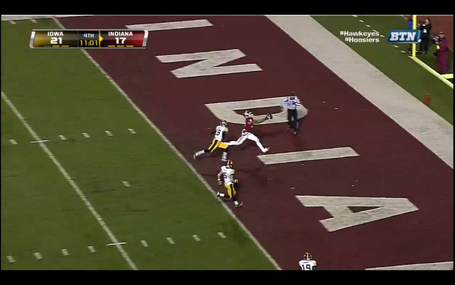 Full extension, fingertip grab. Yikes, Latimer is a scary receiver that could give the Badgers problems.

But, while this Indiana offense is strong, their defense is the worst in the conference. This game has the potential to be a shootout, but if Wisconsin establishes a ground game and controls the tempo of this matchup, it's hard to see that the Badgers don't win this game comfortably.

Wisconsin's defense will probably allow over 20 points, but if it can limit the damage, the Badgers should be set for a second consecutive trip to Indianapolis.