The Badgers finish the regular season with a road clash with Penn State. 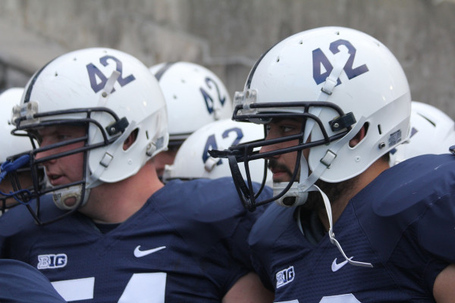 But in fairness? Them putting #42 on their helmets is the rough equivalent of us dropping the action W to put up a #44 in tribute to Chris Borland, who's not going to play. Rob Havenstein's lined up with the #1 unit in warmups, but he's visibly limping. So he's going to be up until the final moments.

The Weather Channel says that radar shows there's a real chance for snow between as the game moves into the second half, providing a feel for the game that will make the old school purists among us proud.

So join us as we see if Montee Ball can get the record and the Borland-less defense can stop Allen Robinson from having the greatest single season in the history of Penn State receivers. And of course, if we can't throw a spoiler into State College Senior Night.