White Out, Wash Out

The impending excitement of playing Penn State in a game that means absolutely nothing.

Share All sharing options for: White Out, Wash Out

Yeah, so okay, alright, well -- I am aware Wisconsin has won one time in State College in 22 years (God bless you, Jim Sorgi). But with this Saturday being Penn State's "Super Bowl" and the most tearful, most important senior day in college football history, it's vital that the Badgers ruin the day and remind Bill O'Brien why his time is better spent in the NFL. Seriously, Bill -- quit on Penn State and coach the Chiefs. 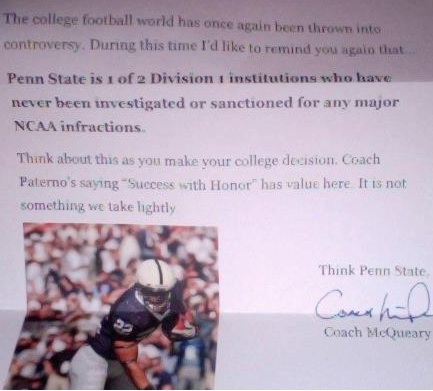 Damn you, Client of David Amendola, this used to be such a fun game. While it’s always fun to trash on a football factory like Ohio State or a pathetic step child like Purdue, the "Grand Experiment" of State College just provided so much more material.

From the late JoPa getting a hand job every year on television from the late Beano Cook to the trite chant of "We Are!" --Penn State was and still is the most holier-than-thou pile program in college football. They did it "The Right Way!" The players went to class! They're a family that raises and nurtures student athletes of character! (Especially defensive line coach Larry Johnson, who reared the consummate ladies man. Can we please lock Larry up?)

Now, after the millions of well-spent dollars from the Freeh Report, we’re supposed to have a newfound respect for Penn State? Nah, I prefer to view them as the hypocritical, once-proud program that still has gone to 50 percent fewer Rose Bowls than Wisconsin since joining the B1G. 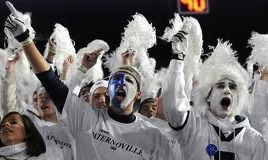 Eash, if there’s anything more hideous than a bearded Yinzer in a smelly Stillerz jersey that hasn’t been warshed, it’s the sight of a Philly Steakhead with a short fuse. Say what you want about the uniformity of the Midwest, but at least Wisconsin and Ohio have some thread of similarity.

Try as they will to assimilate to the B1G, our brothers from the Keystone State are just a lot chippier bunch than the other seven states. Moreover, they have accents -- and not the welcoming goofiness of a 'sota twang or the native bland tongue of Iowa. And now with Maryland and Rutgers joining the family, the assholes from Allentown will now be able to really engulf themselves in regional misery. 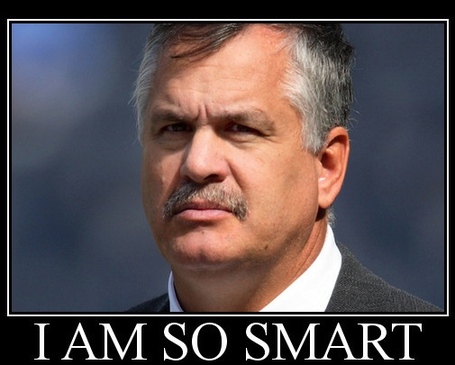 Is it the annoying overtones of dickeshness about his playing career? His stint as hands-down the worst NFL General Manager in the modern era? Either way, as has been chronicled in the mainstream press –- there is no more awful sports media man than Mr. Penn State himself, Matt Millen - who exudes Happy Valley in every whisker of his awful, dreadful mustache.