Wisconsin punted five times from within 52 yards of the endzone against the Buckeyes on Saturday. Coaching not to lose restricted the Badgers in the overtime loss.

Share All sharing options for: Stats and Charts: Punt to Win Edition

As the punt boomed, TMQ wrote the words "game over" in his notebook.

10 minutes to go in the fourth quarter, Wisconsin is down a touchdown. The Badgers are driving, building momentum. They reach the 45-yard-line but an incomplete pass brings up 4th-and-3. Do you think Urban Meyer was relieved to see the punt team take the field? What about in the first quarter, from the Ohio State 30-yard line? Or even a 4th-and-4 from the Wisconsin 49 on the first drive?

The Badgers punted eight times against Ohio State on Saturday. Aside from the above-mentioned three, the Badgers also punted from the Wisconsin 48 (a 4th-and-7) and the Ohio State 49 (a 4th-and-8), marking five punts from within 52 yards of the end zone.

So why the constant decisions to put the ball on Drew Meyer's leg -- a leg with the 71st-best punting average in the FBS? We saw the worst of Drew Meyer on Saturday -- a line-drive punt leading to Philly Brown's touchdown, two touchbacks from within the 50-yard line -- but he hadn't ever given reason to believe he's Brad Nortman reincarnate.

The Badgers' struggles on third downs have to give one pause; Wisconsin's 5-for-10 on fourth downs entering Saturday is likely much less predictive of their performance on important downs than their 34.8 percent rate on third downs (the combined 35.8 percent is even better). But regression to the mean on third down happens and appeared to be happening over the last four games -- 43.8 percent -- or even better, the last three games -- 45.4 percent.

But it is a stretching the boundaries of risk-averse to punt on the 30-yard-line, even with 12 yards to go to make a first down. Observe, the expected points for a college football team with a first-and-10, given the yard line: 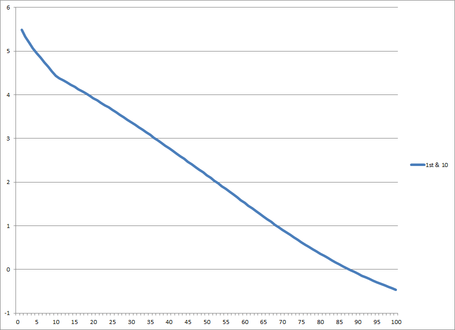 Expected points is a pretty simple concept, especially when we just look at 1st-and-10 -- particularly in the middle of the field, about every 17 yards is worth an extra expected point. Things change a bit at the extremes, but the relationship generally holds.

From this, we can calculate how successful the Badgers needed to be in order to break even relative to Meyer's punt -- that is, both decisions have the same expected point value.

Between Bret Bielema giving Meyer short fields and his own poor punting day, Meyer only mustered one punt with over 37 net yards -- a 47 yard punt with a minus-3 yard return from the Wisconsin 19 on a 4th-and-16 (an obvious decision anyway). Related: this was the only fourth down on which the Badgers would have had to convert over 50 percent of the time to break even with the punt result (58.2 percent, to be precise). And I don't think many would argue with the call on the punt returned by Brown, but rather the execution -- a 40-yard punt would have left a 53 percent break-even rate.

In every other case, the Badgers would have needed to convert only 48.1 percent of the time to break even with Meyer's punt. Given the Badgers' typical success rates on critical downs, four of the six remaining are virtual toss-ups -- break-even rates ranging from 42.9 percent to 48.1 percent.

But two in particularly must be called into question: the punt from the Ohio State 30-yard-line, and the Badgers' final punt, from the 45 on 4th-and-3 with just 12 minutes to play.

The first is made less egregious by the 12 yards necessary to convert, but it would take just a 12.2 percent success rate to break even with the touchback punt result. The Badgers are 8-for-42 (19.0 percent) on 3rd-and 10-or-more this season; the Buckeyes are7-for-53 (13.2 percent) against it. Even those numbers are optimistic enough to suggest going for it. If you can't trust your defense to stop a team from going 70 yards, why would you trust it to prevent them from going 80 or 90?

The second is made even worse by the time and score: 12 minutes to go and trailing by a score. According to the 4th down calculator at Advanced NFL Stats, the break even point for going for it in the NFL falls from 0.39 ignoring time and score to 0.22 with the game situation facing the Badgers here. The numbers won't be exactly the same in a Big Ten environment, but the point holds -- the Badgers needed possession and points here much more than they would in, say, the middle of the second quarter.

In this sort of situation, fortune favors the bold.

The college football data we have suggests a context-free break-even point of 34.3 percent. A similar drop as we see in the NFL when adjusting for the fourth quarter down by a touchdown would bring the actual break-even point down to 17-20 percent. The Badgers have been awful on 3rd-and-short situations all year by any standard, and yet they've still managed to convert on 28 of 52 opportunities (53.8 percent) from 1-to-3 yards. Ohio State, meanwhile, allowed conversions on 27 of 46 chances (58.6 percent).

Nothing particularly damning happened after the punt, although a full two minutes and 13 seconds were drained off the clock and the Badgers got the ball back on the Ohio State 46 instead of the Ohio State 45. The Badgers gained 45 yards on their ensuing drive, and if not for the drive of Curt Phillips' life, two minutes and 13 seconds would have been enough to finish the Badgers off. But an earlier score could have allowed the Badgers a chance at a game-winning drive in regulation, avoiding that pesky overtime period altogether.

All things considered, this was a game the Badgers should have won. They outgained the Buckeyes by 124 yards. Ohio State didn't have a drive of more than 25 yards after midway through the second quarter. But a lack of aggressive play calls badly limited the Badgers' chances of scoring, and in the end playing not to lose only worked until one thoroughly-dominated overtime period. One successful, aggressive play call in regulation -- including but not limited to these fourth downs (also consider going for two after the game-tying touchdown) -- could have given the Badgers the advantage they needed to put the game away in 60 minutes.

Instead, Wisconsin gave an undefeated team a chance at an overtime period. Seemingly as quickly as it started, the Badgers had lost their second straight to Ohio State.