The Badgers rallied from a 14-0 deficit to tie the game with eight seconds left in regulation, but were unable to contain the Buckeyes in overtime.

Montee Ball set out to make history on Saturday, and he did just that. But after Wisconsin forced overtime with a rousing 14-point comeback, Ball's record-tying 78th career touchdown was the lone positive the Badgers took home after a 21-14 loss to the Ohio State Buckeyes.

Ball entered the day with 77 career rushing touchdowns, and his seven-yard rush in the second quarter tied the senior running back with Travis Prenctice (Miami of Ohio, 1996-99) for the NCAA record. Wisconsin's star running back finished with 191 yards on 39 carries (4.9 yards per) and one touchdown. He had a crack at the record-breaking touchdown late in the fourth quarter, but fumbled on a carry from OSU's 1-yard line with 3:07 remaining.

After recovering the fumble at their own 6-yard line, the Buckeyes managed to gain just four yards before punting the ball over to the Badgers with 1:33 left on the clock. Wisconsin quarterback Curt Phillips then led UW on a nine-play, 41-yard drive that was capped with a five-yard pass to tight end Jacob Pedersen with eight seconds remaining. Phillips, in his second career start, finished 14-of-25 with 154 yards and one touchdown.

But the Buckeyes needed only four plays -- all rushes -- to score in overtime. The Badgers gained six yards on the subsequent first down, but after Ball lost two yards on a third-down rush, Wisconsin faced a 4th-and-6 from Ohio State's 21-yard line. Phillips targeted Pedersen with a short throw, though the ball ultimately bounced away and handed the Buckeyes their 11th win of the season.

The two teams fought punch-for-punch for most of the game, which was scoreless until the 1:58 mark in the first quarter. OSU punt returner Philly Brown took a punt from Drew Meyer 68 yards for a touchdown, giving the Buckeyes a 7-0 lead and temporarily stifling a raucous Camp Randall Stadium crowd.

After a three-and-out by Wisconsin, Ohio State began its first second-quarter drive at its own 31-yard line. Quarterback Braxton Miller led an eight-play, 69-yard drive that culminated in a 15-yard rushing touchdown by running back Carlos Hyde. Miller, the dual-threat quarterback widely tabbed as the most central player to the game's outcome, finished 10-of-18 with 97 yards, as well as 48 rushing yards on 23 attempts (2.1 yards per). Hyde, meanwhile, dealt several back-breaking runs to the Badgers, rushing for 87 yards and two touchdowns on 15 carries (5.8 yards per).

OSU led 14-0 after Hyde's touchdown run, though Ball added his record-tying score with 7:30 remaining in the second quarter. Ball, one of nine Wisconsin seniors playing in their last home game, capped an eight-play, 82-yard scoring drive with a seven-yard rush.

With Ohio State holding a 14-7 lead at halftime, neither team scored in a roughneck third quarter. On the first play of the fourth quarter, Wisconsin kicker Kyle French missed a 40-yard field goal after a 15-play, 62-yard drive. The Badgers then endured two more unsuccessful drive before tying the game with eight seconds left. 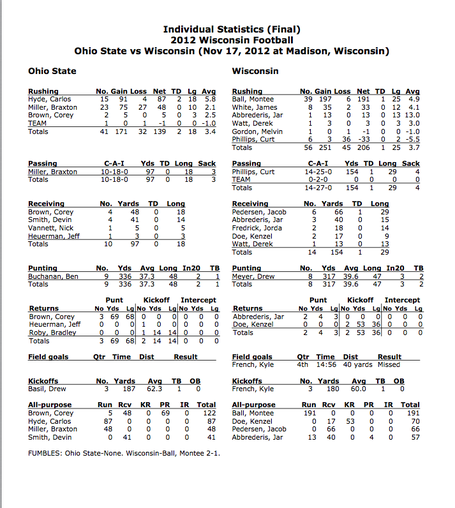