Burn in a Tire Fire, Brutus

Why we're all hyped up to play the Big Ten's most hated University.

Share All sharing options for: Burn in a Tire Fire, Brutus

Finally. Hell yes, finally -- this weekend could not get here fast enough. During my time in Madison, hatred began and ended with Michigan.

But oh, Bucky, not now – it’s not even close. For anyone associated with Wisconsin fandom, our collective vitriol, abhorrence and disgust explodes this week. Coach Bielema, as insufferable as you find the Buckeyes, Badger fans trump you tenfold. And it all starts at the top. 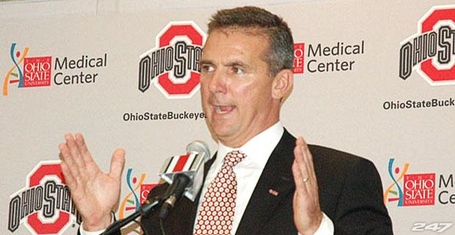 We now have the most obnoxious head coach in this region since Bobby Knight. Already reviled throughout the conference, this despicable robot has brought his brand of Ess-eeey-see sliminess and (hopefully) his wonderful player arrest record to Columbus. So while this season is a practice-run with that sham the NCAA calls probation, the Midwest’s least favorite coach can settle in.

My advice to you, Urban, is simple. If you want to be B1G legend, consume yourself with winning. Think nothing of life outside the film room. Exist on a diet of nothing but caffeine and dip (compliments of EDSBS). Don’t sleep –- sleeping is tapping out. Seriously Urban, keep working and grimacing and stressing until you weigh 80 pounds. By November 2013, you’ll wither away and be forced to spend time with your family.

Asshole in Laurinaitis Jersey wants to kick your ass

Ohio State fan dives into manure for tickets (via thebestdamnsportscom)

This fat middle finger is for you, Ohio State fan. And I’m not even talking about the thousands of moron students that will light couches, riot, break windows or soil themselves on Saturday. At least you are (or have at some point) been enrolled at the state university.

No, this one is for the typical shit-for-brains Ohio State supporter. After a pathetic stint at Kent State, you are living back home in Findlay, enjoying cheap cocaine. Lord knows what you do for work, but your discount Buckeye tattoos are fading already. There isn't a more sad sight than you and your father (dressed up as Woody Hayes) pounding Turkey and sloppily singing "Hang on Sloopy."

It’s no lie that Ohio State has the worst "townie" faction of fans in the Big Ten. Starting brawls, throwing beer, grabbing boobs and being even bigger ones on talk radio -– these guys lead a profane existence.