"I tell our guys, you want to be a goal scorer, you want the prom date? Score some goals, man."

Share All sharing options for: Film Study: Breaking Down the Badgers' New Forecheck

Despite recording the fourth fewest goals in the WCHA last season, expectations for the Badgers' offense was high coming into the 2012-13 campaign. On paper things looked great, as they returned over 80 percent of their scoring and didn't lose a forward who scored a goal.

Results on the ice have been anything but, however.

Wisconsin has implemented a new offensive system this season, going from a 1-2-2 to a 1-1-3. Through six games, Wisconsin has scored just 11 goals on the year. That's an average of 1.83 goals per game.

After a frustrating sweep at the hands of Colorado College two weeks ago at the Kohl Center, things were said. I personally wrote in an article that I felt Wisconsin needed to dump their new forecheck and go back to what the players are familiar with.

I wrote that I felt it was a lazy forecheck. In actuality, it was lazy analysis.

Wisconsin assistant coach Gary Shuchuk was on the 'Wisconsin Hockey Hour' with Brian Posick last night, and had some interesting things to get off his chest. Shuchuk was animated at times, including some quotes about not caring what the "frickin' media says."

But more noteworthy was that Shuchuk was also fired up when talking about the criticism of his new offensive systems.

"You hear about this stuff, we're implementing this new system, it's tough, and it's more defensive. It's more of an offensive system, but it takes time."

"You talk to the guys on the team, you talk to the forwards, and they love it. The defensemen love it. It just takes time. When we play it to a ‘T' it's awesome."

"It's a very aggressive system, very aggressive forecheck. The forwards are always moving their feet, they're not sitting back in a trap, and we're not doing any of that stuff. We're not in a 1-2-2 ‘wait and see.' We're a go, we want to be aggressive. Like I tell the forwards ‘want the puck, my puck mentality,' and that's what it is. When the guys do it, it's great. They understand it's a hard system, you're always moving, and you can't stay out there long. Once they buy into it, and trust me we've been doing stuff in practice and I'm pretty sure they don't want to stay out there longer than a minute, or there's hell to play come practice, so they're starting to buy into it, they realize how long 45 seconds is. I'm excited. I'm excited for it to come out."

After listening to Shuchuk talk, I wanted to go back and take another look myself. Was I fair in my analysis that Wisconsin's offensive system has looked ineffective? When you're watching a game live, you don't always remember things how they were. There's just a lot going on, it's the nature of the beast sometimes.

So I spent a few hours reviewing the first period of Wisconsin's Saturday night game vs Colorado College. Did it change my opinion? Yeah, I think so.

I should note, I'm talking about offensive possession when the Badgers' don't start with the puck. Obviously, if you can carry the puck into the zone, that's the number one option every time.

The first time through I watched the period over without stopping things, but followed closely what UW was trying to do offensively. Time and time again, I noticed that Shuchuk was right -- this is a more aggressive system than what Wisconsin had been running.

The second time I went through and provided screen shots and analysis of the play. Note that I charted every time Wisconsin pressured the offensive zone in the first period when they did not have possession of the puck entering the zone. My results are below.

1.) Puck is dumped deep into the left corner where Jefferson Dahl and Ryan Little both race after it. Dahl is the first one there and plays the puck while Ryan Little provides support on the boards. The F3 is Sean Little, who plays high on the weak side. When the puck is reversed, Sean Little steps up and wins a race to a loose puck. Wisconsin controls possession. 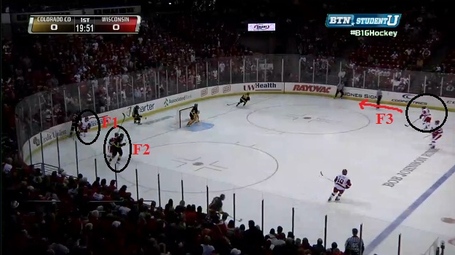 2.) Puck is dumped down the left side boards and carries around the net to the right corner. Mark Zengerle is the first forward on the puck, and creates a turnover gaining Badger possession. Tyler Barnes is the F2, and Michael Mersch is the F3. 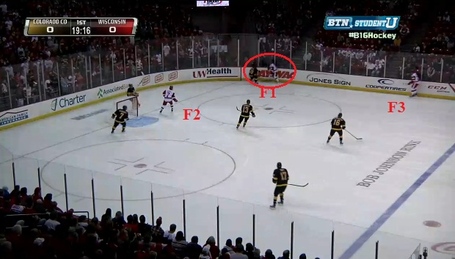 3.) Puck is dumped deep around the net. Mersch is the first guy there and the goalie shoots the puck up the side boards. Barnes is the F2 and steps up but whiffs on the loose puck, and CC is out of the zone. 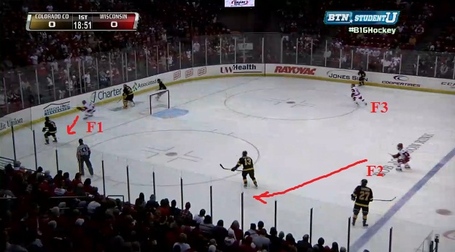 4.) Two part picture here. The play starts as the puck is dumped in the left corner. Matt Paape is the F1 and forces the defenseman to ring the puck around the boards. Brendan Woods is the F2 and gets sucked too low to cut the angle on the puck. The CC winger pucks up the puck on the far hash, and brings the puck up the boards. 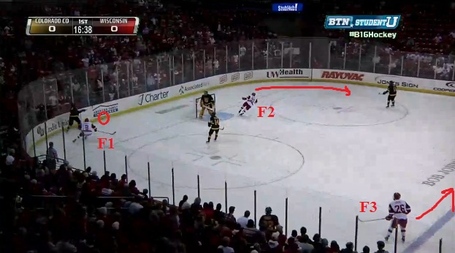 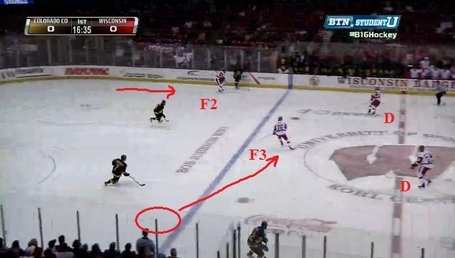 5.) Puck is dumped into the right corner and Zengerle is on him hard. CC defenseman panics and attempts to pass the puck behind the net to his partner. Zengerle anticipates the pass and is able to intercept it, leading to a scoring chance. Mersch is covering the weak side point. 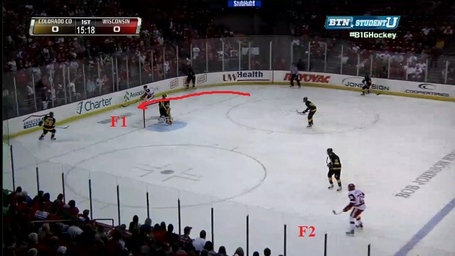 6.) Wisconsin's F1 and F2 lose the battle in the corner and CC tries to break out up the side boards. Ryan Little is the F3 and steps up on the CC player bringing the puck out of the zone. Meanwhile, UW's two defensemen are retreating. Little can take the gamble from the spot he's at because he knows he has support of his two defensemen behind him. His gamble pays off as he's able to make a hit and force a turnover at the blue-line. 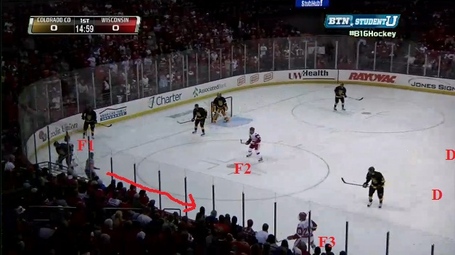 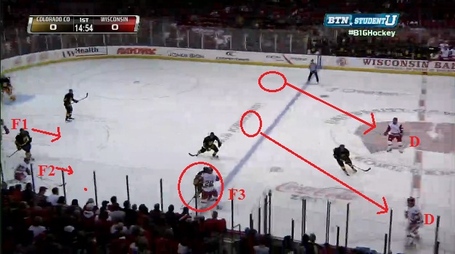 7.) Another good example of what I think Wisconsin is trying to do with this 1-1-3. Dahl flips the puck into the right corner and chases after it hard. CC passes it up the boards and the F2 Ryan Little forces it to the wall. The F3 Sean Little anticipates the pass and steps up on the winger knowing his two defensemen are retreating to cover him. Again the gamble pays off as Sean Little forces a turnover and creates a scoring opportunity. 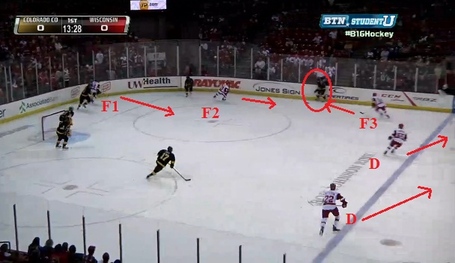 8.) Keegan Meuer flips the puck high in the air and it lands in the right corner. Morgan Zulinick charges hard into the corner after the puck, and Meuer follows to the slot area. The F3 is Derek lee who sets up high along the boards. Lee sees an opportunity to force the play and steps up into the corner. Meuer reads Lee charging in and rotates back and becomes the F3. Lee forces a turnover and creates a Wisconsin possession. 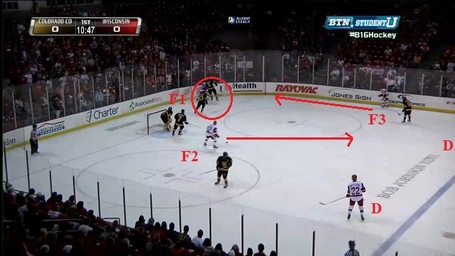 9.) Play starts with Dahl forcing the play behind the net. The CC d-man makes a nice play and Dahl slips and falls to the ice. CC d-man is able to skate around the net and make a pass to his partner who carries it up the boards. Ryan Little takes an angle on him but he's able to hit the center swinging through in stride for a breakout as Wisconsin's F3 and two defensemen retreat.

That said, given that Dahl had fallen down and the play had become a 5-4 for a split second, it's hard to fault the F3 from seeing the easy breakout and retreating to make sure UW had numbers back so CC doesn't go on a 3-on-2 the other way. 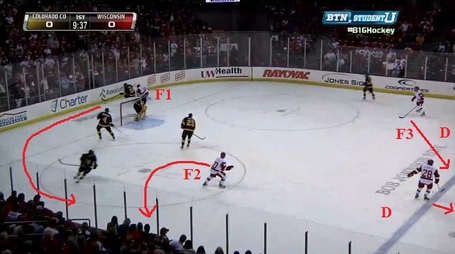 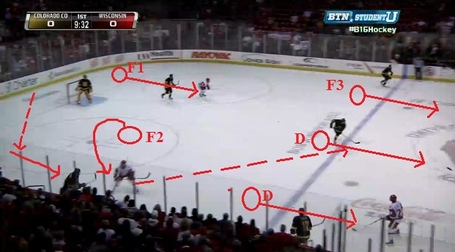 10.) On this play the puck is dumped into the right corner and Navin chases it down. Navin forces the the CC d-man into ringing the puck around the boards. From there Navin transitions from F1 into F3 and cycles back. The F2 (Woods) swings towards the puck forcing a play along the near boards. Paape was the original F3 and as he sees the play happening steps up along the wall and along with Woods forces a turnover and creates a Badger possession. 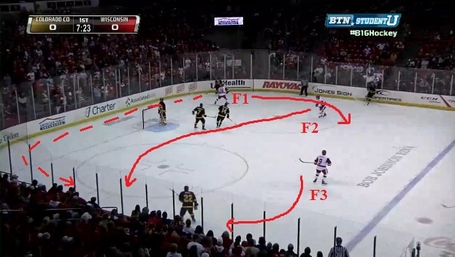 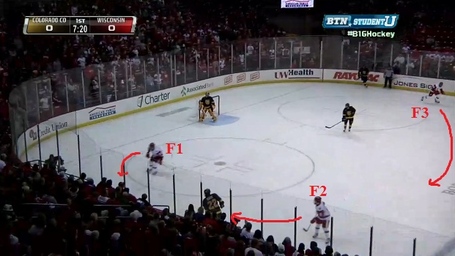 11.) The puck is dumped into the right corner and Woods goes in hard laying the body. Matt Paape reads the play and follows him in and supports him. Wisconsin is in the middle of a line change and Zulinick enters the zone as the F3. Once Zulinick recognizes that his guy gains possession, he cuts in and Woods feeds him with a nice pass leading to a scoring opportunity. 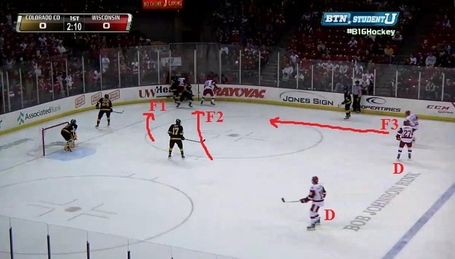 12.) This play starts as the puck is dumped into the right corner. Derek Lee goes in hard , but CC is able to gain possession. Meuer swings in to force the play against the wall. Wisconsin is in the middle of a line change and Ryan Little comes hard into the zone. Little's aggressive play forces a turnover at the blue-line as the CC winger has nowhere to go with the puck. 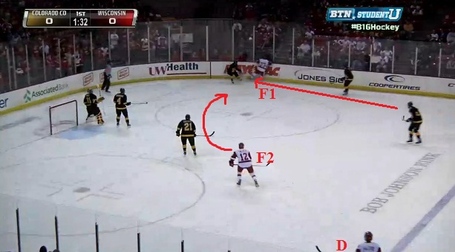 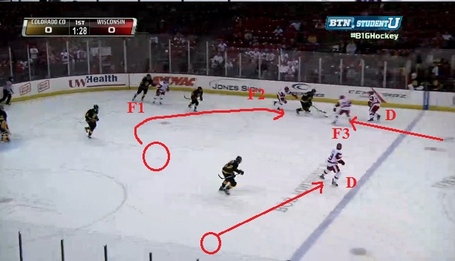 For the record, Wisconsin put up 11 shots on goal in that period compared to Colorado College's seven. That said, scoring chances seemed to be a lot more lopsided in Wisconsin's favor. Wisconsin finished the game with 33 shots on goal (its highest total of the season), but never found the back of the net.

If Wisconsin wasn't getting any chances, I'd be a lot more concerned. I think one stat that is trending in the right direction for UW is total shots on goal.

In the first series of the season vs Northern Michigan, Wisconsin recorded 40 shots. In a road series vs Minnesota-Duluth, Wisconsin increased its shot output to 47. Two weeks ago vs CC, UW hit the 50-shot plateau for the first time this season, recording 59 on the weekend.

Shots are a good start; you need to shoot to score. Although as Shuchuk says, chances are nice, but you have to score to get the prom date.